When the politically unthinkable happens, why can't Canadians see the signs? 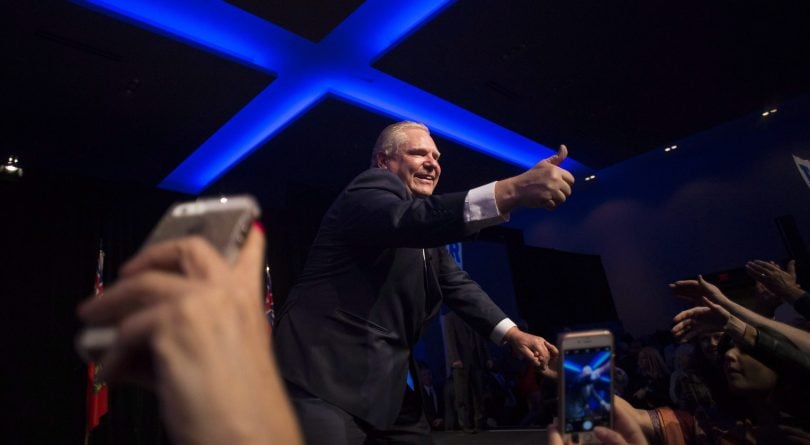 Angela Wright is a writer and political analyst. She previously worked as a Conservative political staffer at the House of Commons. She holds a Master’s in History from The University of Iowa.

For many both inside and outside the party, the result seemed unthinkable. How, many Ontarians asked, could conservatives vote for Ford as leader? And how could conservatives, more pointedly, vote for him when there was an eminently qualified woman to choose instead?

Ontarians, though, were forewarned. On Mar. 9, the day before the leadership results were to be announced, Mainstreet Research released its last poll of Ontario PC Party members’ voting intentions. “Writing off Doug Ford would be a mistake,” said Quito Maggi, Mainstreet Research’s president. Despite Elliott’s six-point lead in the popular vote, Ford and Elliott were essentially tied in riding points. And with a slight margin of 153 riding points, Ford indeed became the winner.

Even before former PC leader Patrick Brown was accused of sexual misconduct, the party was riven by Brown’s declaration of support for a carbon tax in a room full of unsuspecting convention delegates; in late 2016, riding after riding was marred by controversy as candidates were disqualified seemingly without cause and often at the last minute. The fallout caused such a rift that factions of the Party broke off and formed movements like I’m Out and Take Back Our PC Party. Ford capitalized on party members’ frustrations and came out forcefully against Brown, contrasting with Caroline Mulroney and Christine Elliott, both of whom had members of Brown’s former team on their campaigns. Taking advantage of those longstanding intra-party squabbles, in addition to his strong base of supporters in suburban Toronto and among social conservatives, ultimately secured him the leadership.

That so many people couldn’t see the warning signs of Ford’s ascension shows Canadians’ unwillingness to accept the politically inevitable—and how much voters are now disconnected from each other across political lines. While social media gets a lot of flak for polarizing society and creating political echo chambers, a recent study by Oxford University and the University of Ottawa found that fewer than 10 per cent of people were actually living in one. This suggests there is something more sinister at work, across the political spectrum: bias.

Indeed, days before then-premier Jim Prentice dropped the writ in Alberta on Apr. 7, 2015, his Alberta PC Party was ahead in an Insights West poll, with the Wildrose Party in a close second and the Alberta NDP in third. But as election day approached, public opinion polls broadcasted what many considered to be impossible: an NDP majority government and the collapse of the dynastic Progressive Conservative Party. The oilpatch—at least, according to conventional wisdom—would never elect a party with strong pro-environment policies.

Anti-NDP bias in the province was so strong that Albertans in 56 ridings expected their local PC candidate to win. The NDP went on to win 54 seats, while the PC Party was reduced to only nine seats. Poll analyst Éric Grenier parsed the numbers after the Alberta election and discovered that many people who voted for the Wildrose Party actually preferred the NDP over the PC Party. That so many Albertans preferred an NDP government yet still believed the PC Party would win suggests that, in addition to bias, voters are disconnected from others in their communities—so much so, that voters were unaware how widespread their own feelings were.

This is a problem highlighted by research into Canadian loneliness. Andrew Wister, a professor of gerontology at Simon Fraser University, has found that approximately one in five Canadian adults express feeling disconnected from others. Seniors and marginalized peoples, including Indigenous peoples, Black people, people of colour, people living in poverty, and LGBTQ+ people are at greatest risk for loneliness and feelings of isolation.

Canada’s changing demographics thus have a serious impact on loneliness—and, as a result, how we interact with ideas in our democracy. Canadian society is aging rapidly; the number of seniors now exceeds that of children for the first time. The population of Indigenous peoples has increased by more than 40 per cent, and 22.3 per cent of Canadians now identify as a visible minority, up from 4.7 per cent in 1981. If policies fail to confront the growing isolation felt by many seniors, and if issues such as systemic discrimination based on race and sexual identity go unaddressed, disconnection among voters will only intensify.

Worse, partisan attacks from both the left and the right deploy language that reduces their political opponents to caricatures. The left often characterizes conservatives as heartless program slashers who hate women, gays, and minorities; the right, meanwhile, routinely paints liberals and progressives as snowflake crybabies who want to shut down free speech with invented identity politics. Both sides accuse the other of wanting to destroy the country and make life worse for Canadians. But the unexpected triumphs of Ford in the Ontario PC Party and Rachel Notley’s NDP in Alberta show that reducing opponents to caricatures doesn’t necessarily translate into electoral success—it just makes it harder to see the full electoral picture.

Voters and political parties in Ontario should take heed. Kathleen Wynne’s Liberals have wasted no time in branding Doug Ford as a heartless businessman who will cut necessary jobs and services, and Progressive Conservatives have constantly reminded voters that Wynne is corrupt and can’t be trusted. Neither of these parties appears interested in the NDP, a party that opinion polls are predicting has little chance of winning.

In Alberta’s 2015 election and the Ontario PC Party leadership race, polls released just prior to election day have largely accurately projected the elections’ results. But the campaigns that precede those polls sweep up voters in debates, attack ads, and candidate missteps—effectively causing them to default to their biases, colouring their impression of those generally predictive opinion polls.

While polls currently have the Ontario PC Party in first place, it’s still too early to predict a winner for Ontario’s spring election. Voters and political parties in Ontario should pay close attention to polls announced in late May and work toward bridging the divide between themselves and others in their communities—lest they be shocked, confused, and outraged by the result on June 7, one way or another.