When the world stopped listening to America

Scott Gilmore: It's become increasingly clear that U.S. power is not only absent under Trump, but unneeded. It is unlikely anyone will unlearn this lesson. 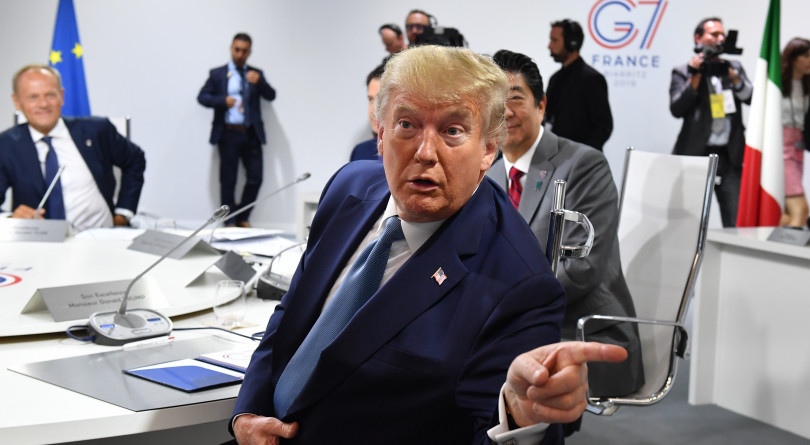 Presidential legacies are slippery things. Occupants of the Oval Office always try to frame their administration in the best light possible, hoping that history will remember their accomplishments and not their failures. History is a horrible gossip, however. We remember that William Howard Taft was so obese he needed a custom bathtub and not how he stood up to powerful monopolies. Likewise, Monica Lewinsky’s blue dress will still be talked about long after we’ve forgotten Bill Clinton’s economic policies.

There is no doubt Donald Trump has high expectations for his legacy. He began to talk up his accomplishments almost before he had even moved in to the White House. By his own account Trump has done more than any previous president, and ranks himself as the best since Lincoln.

Public opinion currently disagrees. Despite a growing economy, the majority of voters do not believe Trump has been doing a good job. In fact, according to a new USC Dornsife/Los Angeles Times poll, less than 30 per cent of Americans would be happy if he was re-elected in 2020.

So, if the Trump presidency does come to an end next year, what will be his legacy? The president’s supporters would likely point to the booming economy. It is true the markets have never been higher, but they grew at a much faster rate under his predecessor. What’s more, the consensus among economists is the few interventions made by Trump (tariffs, tax cuts, and the dismantling of the Dodd-Frank Wall Street reforms) have hurt growth.

What about health care? Trump came in to office promising the repeal of Obamacare and the implementation of a new plan that would be “a lot less expensive” while providing “insurance for everybody”. However, in spite of controlling both houses of Congress, the White House and the Supreme Court, the Republican Party under Trump was still unable to repeal Obamacare. And as for Trump’s promised replacement, no plan has ever been presented.

Will Trump be most remembered for The Wall? He has yet to build a single kilometre. Immigration? All of his visa restrictions will almost certainly be rolled back by the next administration. A renaissance for coal? Production continues to decline. Killing NAFTA? After two years of negotiations, it was basically just re-named.

He did promise and deliver a trade war with China, however. And ISIS was defeated on his watch—he may be remembered for that. Likewise, he tore up the Iran Deal, something that will likely have reverberations long in to the future. In fact, it is increasingly clear that America’s role in the world will figure prominently in Trump’s legacy.

The Greenland Affair, this week, made that obvious. When the president proposed buying the island, Denmark simply rolled its eyes, figuratively and literally. Even when the president called the Danish prime minister a “nasty woman”, no one really cared—illustrating a dramatic shift in America’s role in the world.

For 80 years, the United States has been the indispensable nation, the hub in the international system: allies focused on it, alliances depended on it, and rivals feared it.  That has all changed under Trump, and it is unlikely it will change back.

In terms of bilateral relations, America’s traditional allies have learned that the United States does not need to be treated with complete deference. If a previous American president had publicly derided the Danish PM as “nasty”, it would have sparked a political crisis in Copenhagen. But now, they have learned (along with Canada, France and Germany) that a furious American president, a hollowed-out State Department and an isolationist foreign policy, is not the end of the world.

Related to this, Washington allies have also consciously moved away from the hub and spoke system that characterized the “America Century”—all western initiatives began or ended in D.C. Now, Berlin is more likely to call Paris before it calls the White House. Likewise, Canada is consciously building stronger relations with Europe, knowing that the United States cannot always be relied upon.

Similarly, international alliances have adjusted to the American decline. The United Nations has figured out how to muddle along without Washington. And in so doing Chinese and Russian influence has increased in New York. This week, France is hosting the G7, which won’t bother issuing a group communiqué, as the member states have learned you don’t need the U.S. on board to act on climate change, Iran, or anything else.

America’s rivals have also been paying attention. They have learned that Washington’s power is far more constrained that originally feared. And, you can directly interfere in the American electoral system with impunity.

This decline in American influence can be seen within the context of a broader historical trend that dates back to 9/11. President George Bush strained the international system and the patience of its allies by launching an expensive and never-ending War on Terror. And President Barack Obama implemented a policy of “leading from behind” that accomplished little more than the erosion of Washington’s importance at the UN and elsewhere. All of this occurred while China, India and Europe’s international statures grew, creating a relative fall in American prominence.

But, under Trump this fall has accelerated dramatically, and the international system has been pushed into previously unexplored territory—where American power is not only absent, but evidently unneeded. It is unlikely anyone will unlearn this lesson.

Historians may find that Trump’s legacy was the definitive end of America’s role as the de facto “leader of the free world”. Or, true to gossipy form, history may simply remember him as the president who liked to “grab them by the p***y.”