When Trump phones a pal on an unsecured cell, won't someone think of the spies?

Opinion: China and Russia are reportedly eavesdropping on the U.S. president's cellphones. But maybe, muses Tabatha Southey, those foreign spies are the real victims 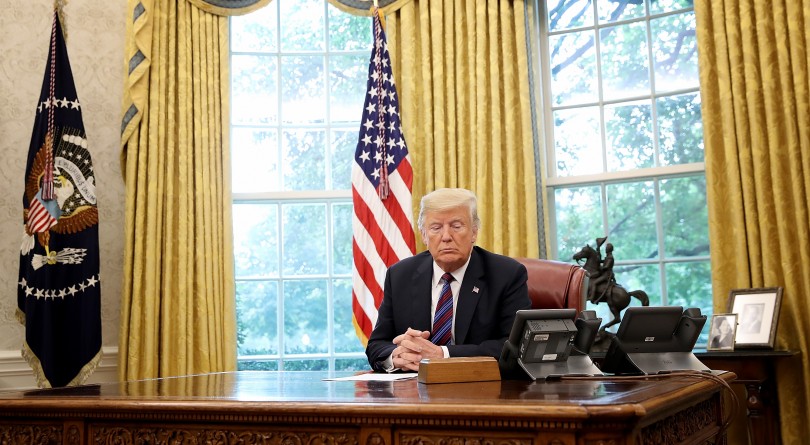 U.S. President Donald Trump speaks on the telephone via speakerphone with Mexican President Enrique Pena Nieto in the Oval Office of the White House on August 27, 2018 in Washington, D.C. (Win McNamee/Getty Images)

In a story that could well have run under the single-word headline “Sigh,” the New York Times reported that despite multiple requests from his long-suffering and generally short-serving staff, the President of the United States routinely uses his cell phone to call folks up and just shoot the breeze. He does this despite the fact that it has been repeatedly explained to him that, because those lines are not secure, Russian and Chinese intelligence agents are at the very least eavesdropping on his calls.

“They said they had further confidence he was not spilling secrets because he rarely digs into the details of the intelligence he is shown and is not well-versed in the operational specifics of military or covert activities,” reported the Times, which could be forgiven for developing a font called “Sobbing.”

Naturally, there has been some talk about the effect Trump’s call may be having on the efforts and even morale of those working in America’s intelligence agencies. But I began to wonder about the enemy spies, who are too often ignored. Too many people dismiss these people as if all the complex reasons they do what they do can be boiled down to “Well, they’re spies, it’s literally their job, this isn’t that complicated.”

Not me: I’ve got a deadline to meet, very little concern about the effect my work might have on public discourse, and some David Foster Wallowing to do.

I stepped outside my east coast, big-city, not-a-spook bubble and went to hear what these forgotten international men and women of mystery had to say. These are their stories. Join me for this special report on: Listening to Listening in on Trump Country.

“You describe him as ‘shooting the breeze,’ ” a faceless dark blob with an electronically distorted voice said to me in a diner, my first stop on my tour across the many countries whose agents eavesdrop on America. “But you do even not begin to understand what it is you’re speaking of. Once, he called a contractor whom he had been refusing to pay for work on a Trump property and he literally just started making ‘whoosh-whoosh’ wind and “pew-pew” shooting sounds at him. Our top analysts suggest he may have been trying to ‘subtly’ threaten the contractor into forgiving the debt before the ‘Space Force’ destroyed him, but that may have been a reach since, the next day, he called up the Sharper Image’s toll-free line and started making farting noises.”

“I’ve always considered myself a master of deception,” says one femme fatale who is called, by those who survive her attentions, “The She-Wolf of Novosibirsk.” “But faced with something like that, it just feels like none of my lies really mean anything.” She sighs, defeated. “He spent 45 minutes talking about the time he scored a hole-in-less-than-one. He wasn’t even trying to impress anyone—he just called up a pharmacy in Wyoming and started lying to the automated prescription-refill line.”

“It’s just too much,” says one mysterious figure, known only as ‘The Shadow,” sautéing minced garlic with chilli flakes and waiting for his pasta to boil at home.  “There’s stupid—you know, the kind of stupid that makes a man think he can escape his doom once I have been set upon him—and then there’s stupid.

“You might think Trump’s hit rock-bottom dumb by demanding America’s allies pay up like NATO were a golf club and Norway were behind on its dues. You might think it doesn’t get any worse than hearing the Saudis’ claim that a 59-year-old journalist, apparently suddenly convinced he was a Ninja Turtle, died while trying to have a fistfight with more than a dozen men, and saying that it’s ‘credible.’ But you should hear what he says when he foolishly believes we aren’t recording his every word. It’s more than a super spy can bear, really.”

Another deadly assassin, codenamed “Flying Mantis,” burst out from inside a closet in the room I was scheduled to interview him in and attempted to garrot me, but instead collapsed to the floor, sobbing, before he could properly tighten the line around my neck. “What meaning is there in killing a journalist, in killing any enemy of the People’s Republic anymore,” he whimpered into my shoulder, “when he has killed grammar? The others complain about his phone calls, but they know nothing. He reserves the true horror for his text messages. Capitalization does not work that way.”

One intelligence officer, who told me to call him “Kevin Liu” despite my repeated offers to call him “The Man with the Grey Plastic Keyboard” or maybe “Typistfinger,” seemed untroubled by the whole experience. “Yeah, he’s ignorant, stupid, and he can’t work out how to lock his iPhone, so he keeps pocket-dialling Emmanuel Macron. But I think the Flying Mantis is being a bit of a baby about the whole thing. It’s possible I have more perspective. Back before I got into the spy business I worked a government help desk. Nothing really phases you after the six-thousandth time Chen Deming has called you up to complain that ‘the internet is gone’ because he’s deleted his Internet Explorer shortcut.”

READ MORE: Why is Trump the most impervious U.S. president in history?

I attempted to ask one agent about China’s efforts to influence the president by having people he regularly calls for advice serve as unwitting agents, passing along pro-China talking points fed to them by seemingly neutral third parties. “Oh yeah, we started out with that,” she told me, “but recently we’ve mostly just been focusing on trying to subtly coach him on how to turn off speakerphone. He keeps turning it on by accident, then talking really loudly, directly into the phone. It’s doing real damage to our analysts’ hearing.”

One haggard old Russian man took a break from standing mysteriously in the shadows just out of range of a street light to tell me about himself. “I’m a spy,” he told me. “My papa was a spy just like his papa before him. I was born in a deep shadow just out of range of a dramatic street light, a lot like this one. Espionage is all I’ve ever known. But the industry’s changing. There was a time a man could support his family with some simple tradecraft and a ruthless willingness to do anything in the service of the state. Things are different now. Nobody could sneak a microfilm copy of a classified document out of the country hidden inside a hollow heel of the boot worn by the man whose body he had hidden in his suitcase better than my father, but who needs a skill like that nowadays, when the president refuses to stop picking up his old cellphone, an item he once forgot on a golf cart, and babbling like a brook about just about anything that pops into his head over unsecured lines. He just goes on and on and on and on. I can’t even write it all down, and I’m a Russian.”

I tried to express my sympathy, but he just shrugged me off. “It’s okay, little missy,” he said with a sigh of resignation. “I knew old timers like me were on the way out when Trump tried to impress our ambassador and foreign minister with classified information during a meeting in the Oval Office. I’ve been taking some night classes. I think I have real future in web design. Also, I’m thinking of doing a podcast.”