'Where is the roll call of shame with the names of the priests and nuns responsible?'

Letters to the editor, September 23, 2021: Readers weigh in on reckoning for the abuse in residential schools, taxes on sweet beverages, forgiving Jaskirat Sidhu and more 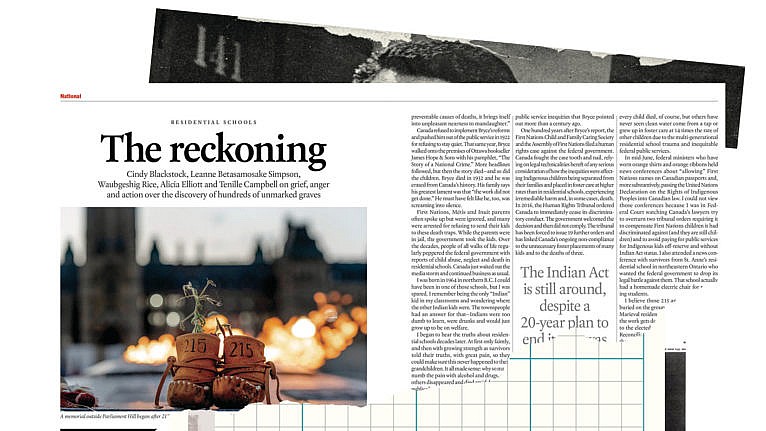 What a wonderful surprise to open my mailbox to find the new Maclean’s magazine for September. What a great new design all the way through. Looking forward to more issues. —David Mossey, Cambridge, Ont.

I absolutely love your redesign for your magazine. It has been quite a while since I’ve read every article from front to back, but I did in the September issue! I understand that you have prided yourself in being a more political publication, but I was able to learn much of what you printed in other media outlets, and especially on television. I thoroughly enjoyed the diversity of topics you seem to have settled on, and the shorter length of articles on most topics. Please keep up the great work! —Pauline Therrien, Sudbury, Ont.

I’ve had a subscription to Maclean’s since my mid-20s, and that’s a 45-year run for me. My greatest disappointment came when the magazine went from a weekly to a monthly. The various redesigns over the years have been fine, but to me, the latest one is really pleasing to the eye. The magazine has a crisper, more attractive look, and the content is great, which I anticipate will continue. One drawback for me, as my eyes age, is the reduced contrast between the coloured background and the print. —Pierre Brisson, Ottawa

As a New Brunswick citizen, I am ashamed of and horrified by the details of how the racist and alarming attack on Dr. Ngola unfolded (“‘Patient zero’ fights back,” Justice, August 2021). Reverse engineering of facts for the purpose of pursuing charges to give cover to a political leader—a premier, no less—is something we might not be surprised at in an authoritarian regime, but in a democratic country it is beyond the pale. The saddest element in this story, the one that makes me most ashamed, is the conclusion that there is no political price to pay. —Raelene Graham Theriault, Island View, N.B.

I have read many articles recently describing the cruelty inflicted on Indigenous children at residential schools (“The reckoning,” Residential Schools, August 2021). I have cried at every one. Now I am angry. Where is the roll call of shame with the names of the priests and nuns responsible? Why are these monsters and their families protected from societal condemnation under the cloak of anonymity afforded to them by the church? —Pearl Edwards, Montreal

In August, Marie-Danielle Smith spoke with Murray Sinclair on reconciliation and unmarked graves.

The most pertinent message of the interview with retired senator Murray Sinclair (Interview, September 2021) needs repeating: “The government of Canada has never developed a plan of action about how they are going to achieve reconciliation. They do not hold their system accountable for achieving reconciliation.” Unless Maclean’s has a plan for continuing to put pressure on the government to find and make those plans, this article is just another self-congratulatory piece, placating the conscience of “Canada’s White Magazine.” —Shane Nestruck, Winnipeg

The power of listening

Wendy Glauser covered what it takes to change the minds of the vaccine hesitant.

I was intrigued by Wendy Glauser’s recent article, particularly the approach to vaccine hesitancy it promotes (“Don’t hesitate to listen,” Vaccines, August 2021). I wonder if this approach could be applied to many other contentious issues. For instance, when someone raises genuine questions about immigration policy, decolonization efforts or gender-neutral washrooms and is quickly dismissed as racist or transphobic, the opportunity for meaningful dialogue and, significantly, a re-evaluation of views, is lost. The concerns don’t disappear; rather, they shift underground, where they continue to influence decisions, including at the ballot box. Or the discussion may be relegated to safer spaces, such as opinion-reinforcing conversations among like-minded people. I am not, to be sure, suggesting that malicious actions be tolerated, but a listening ear usually achieves more than curt judgment. —David Scott, Lethbridge, Alta.

As the Maclean’s letter-writer who was criticized for returning baskets to the First Nations band that made them, I feel compelled to respond (“Desperate self-flagellation,” Letters, September 2021). It’s true that the baskets were not acquired maliciously, but I don’t understand how returning the baskets is nonsense and clutters significant action. The response that I received from the band belies that sentiment: “Thank you so much for getting in touch and for your generous offer. We would be very pleased to repatriate the baskets. It would also be exciting for us to go back to our Elders and get a sense of who might have created them. We are building a new culture centre that will have an interactive historical and artistic display, and it looks like the baskets would belong there.” —Laura Jones, New Westminster, B.C.

In July, C.J. Jennissen wrote a letter responding to Sarmishta Subramanian’s story on education disruption in the pandemic.

The decision to publish C.J. Jennissen’s ignorant letter to the editor displays a lack of judgment rarely shown by your fine magazine (“Are the kids all right?” Letters, August 2021). By publishing the writer’s declaration that the 13 years of school are “a huge waste of time” that turns “children into cabbages,” you give credence to such nonsense. Teachers and administrators have spent countless hours attempting to create new ways to teach and organize learning groups online without any training or prior experience. The past 18 months have been the most radical adjustment in public education in its nearly 200 year history. If education was left in Jennissen’s hands, it would not take us long to slide rapidly to the bottom of the world’s education ladder. —John A. Borst, Kingston, Ont.

As a stellar hockey player, Hayley Wickenheiser offered us Canadians excitement and entertainment. And now she offers us health care as a physician (“A letter to my future self: Dr. Hayley Wickenheiser,” Annotation, September 2021). A big thank you and congratulations to her! What a great example she sets for Canadian girls. —Marie Medoro, Mississauga, Ont.

In August, Aaron Hutchins examined whether forgiveness is possible for Jaskirat Sidhu.

Your article on forgiveness is excellent (“Forgiving Jaskirat Sidhu,” Justice, August 2021)! The biggest misunderstanding about forgiveness is to equate it with forgetting, with wiping the slate clean, with “turning the other cheek” and with a necessary restoration of relationship. Forgetting is never an option, nor should it be. Turning the other cheek simply invites more abuse. Some relationships should not be restored. Sadly, healing is optional. Without the hard, soul-wrenching work that must go into it, we continue to tear at the wound. Forgiveness is the first step in self-healing—if it helps the perpetrator of the hurt, fine, but it’s first and foremost about a person’s own soul-work. —Mike Kosyk, Grande Prairie, Alta.

Gratitude for a giggle

Thank you Trevor Cork and all of the Listowel businesses for your unbelievable humour via the sign wars during the nasty COVID-19 pandemic (“War of the words,” National Notes, July 2021). We drove there at least three times to giggle and take pictures. This world needs more humour! —Verda-Jane Hudel, Wilmot Township, Ont.

In the September 2021 issue, Maclean’s examined Newfoundland and Labrador’s tax on sugar-sweetened beverages:

Sounds to me this new tax money should be spent fixing water infrastructure. —Nykolas Bryden on Facebook

If it’s between pop and water, I’m buying a filter. —Stewart Corneliss on Facebook

The most shocking thing about this article is that Pineapple Crush is a thing! —Thomas Bollmann on Facebook

Maclean’s wrote about a wildfire lookout in northern Alberta for the September 2021 issue:

That threat is especially real in Alberta, where forest fire suppression budgets have been slashed by the provincial government and the jobs will likely be privatized by someone aligned with said government. —Thomas Mike on Facebook

Here in N.S. we ripped down most of ours. Short-sighted resource management. —Rob Fadelle on Facebook

We welcome readers to submit letters to either letters@macleans.ca or to Maclean’s, 15 Benton Road, Toronto, M6M 3G2. Please supply your name, address and daytime telephone number. Letters should be fewer than 200 words, and may be edited for space, style and clarity.