Who will be the #WelcometoCanada champion now?

Matt Gurney: Justin Trudeau and the Liberals have suddenly pivoted to a much harder line on refugees and asylum claims—and the timing sure is interesting 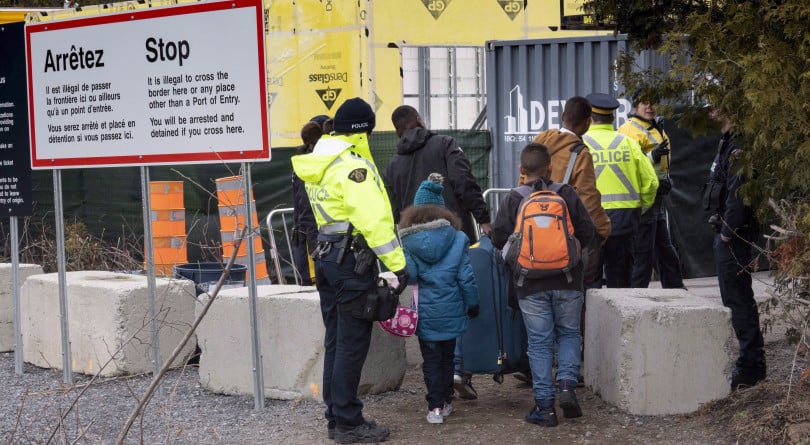 A family, claiming to be from Columbia, is arrested by RCMP officers as they cross the border into Canada from the United States as asylum seekers on April 18, 2018 near Champlain, NY. (THE CANADIAN PRESS/Paul Chiasson)

In a typically smart piece in the Globe and Mail last week, Scott Reid described Prime Minister Justin Trudeau as a man suddenly reduced by recent scandal to a life as “a mere mortal, a regular old politician—as someone concerned with the calculations and machinations that no office holder can actually afford to ignore, but which his most ardent admirers somehow imagined he was invulnerable to.”

This doesn’t mean Trudeau is finished in the next election, Reid predicts, before adding, “but his relationship with voters has been irretrievably altered and, with only a few months before the campaign launches, that fact will reshape the coming election … From here on out, he must, like the rest of us, go forth and compete for the right to claim his way as the superior path.”

Like I said, it’s a smart piece. Reid doesn’t offer much advice beyond that Trudeau should continue to focus on support for the middle class and equality as his main issues. But it’s already apparent that the Liberals are shifting bigly in one major policy area. Buried deep in the Liberals’ recent budget implementation bill—remember when they said they wouldn’t get sneaky with omnibuses?—are changes to how Canada handles refugees and asylum seekers.

To put it bluntly, much more harshly than before.

The changes are significant, but for our purposes here, it suffices to say that the changes make anyone who has made a refugee or asylum claim in another country ineligible to make one in Canada, so long as that country is deemed safe by Canadian officials and co-ordinates with us on immigration matters (this includes, notably, the United States). Note that I said a claim — they needn’t have been approved. The claim alone makes them ineligible to apply in Canada; they will not be owed a hearing. Individuals who have previously made a claim in Canada will also be ineligible to enter and make another.

It’s unclear whether the proposed changes would withstand a Charter challenge. The government has also previously said it is working with the United States government to choke off the flow of irregular border crossers entering from U.S. territory.

This is not just a big win for those who’ve been calling for such action for years—notably including the Conservative party. It’s also a sharp reversal from previous Liberal actions and statements on the issue. As Andrew Coyne cuttingly remarked in the National Post, “This is not just the most extraordinary about-face yet—from #WelcomeToCanada to deportations without hearings, in the space of two years—from a government that has made a habit of them. It is a fundamental breach of faith.”

It may be at that. I’m more sympathetic to the proposals than my friend Andrew—the border issue, though not huge in quantitative terms, was handled ham-fistedly by the Liberals from the beginning and something was always going to give on that front. I’m cynical enough to recognize that the Liberal about-face—the “breach of faith”—is motivated by their own waning poll numbers rather than any particular concern over border security or our strained social services. But even cynical moves can sometimes be the right ones. For whatever reason or combination thereof, the Liberals have chosen this moment to pivot to a much harder line on refugees and asylum claims than seen thus far in their mandate.

And the timing sure is interesting. Over the weekend, pollster Frank Graves of EKOS teased part of an upcoming report on attitudes to immigration in Canada. I say teased because he hasn’t released a full report yet—that’s apparently coming in the days ahead. But what he did reveal is that, for the first time in the 25 years EKOS has been asking, more Canadians now say that there’s too much non-white immigration than say the current mix is “just right” or that we need more non-whites. This is is particularly true among self-identified Conservative voters, but the NDP and Greens also have surprisingly large blocs saying there’s too many non-whites coming to Canada. (What an interesting conundrum for Jagmeet Singh, Canada’s only non-white federal leader.) Only self-identified Liberal voters resoundingly rejected that suggestion.

I’m hesitant to start advancing any broad arguments until we see the full EKOS report. But I did note something else Graves tweeted over the weekend. In response to a question about how this shift in voter opinion is translating politically, Graves replied, “The Liberals have seen significant losses to the Conservatives on those who are less comfortable with visible minority immigration. It is now a critical sorting variable shifting voters.”

The irregular migration of asylum seekers into Canada has been happening for years now. There were just over 18,000 claims in 2017, and over 20,000 last year. Roughly 4,400 have been granted asylum; not-quite 4,000 rejected. More than 30,000 are waiting for a determination—a wait that might take years due to massive review backlogs.

In the meantime, those 30,000-some-odd souls are here, cared for by us. Services in Montreal and Toronto have been strained by the influx. Opinion polls have been showing hardening views among Canadians even for legal immigration at the same time. Legal immigration, of course, is not the same thing as illegally crossing the border to claim refugee status, but the distinction seems to be lost among many Canadians. The Liberals dithered even as attitudes soured among the electorate, but with their polling taking a hit, they’ve decided to take a hard line.

It raises a fascinating question: Are refugees now simply too politically radioactive everywhere? Europe, of course, beset by a major influx of migrants, has turned sharply against immigration. The U.S. government is cracking down hard on migration across its southern border, where tens of thousands of people cross illegally every month and politicians have failed for literally decades to come up with a solution.

Justin Trudeau, for years, was being hailed as some kind of exception to the trend across the free world. Alongside Angela Merkel, he was a leader of a large Western country who went out of his way to welcome migrants and refugees with warm clothes and warmer smiles.

Merkel has already announced she won’t run for another term. Trudeau has seemingly decided to take a hard line. Is there any leader in the West who’ll dare to take an overtly pro-refugee line? Or has that position simply no longer politically tenable? On the world stage or during our upcoming election, who’ll dare take the #WelcomeToCanada position?

Will anyone at all?