Why 2018 will be the year of Indigenous youth 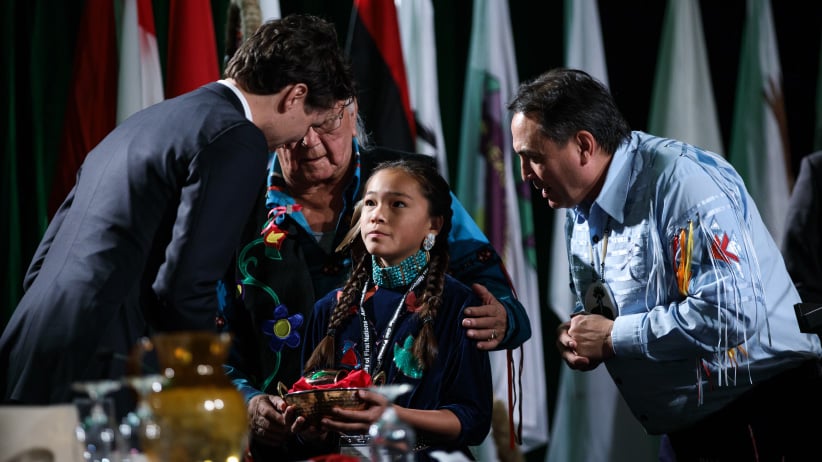 Darcy Lindberg is an âpihtawkosisân nehiyaw/mixed-rooted Plains Cree person, a recovering practicing lawyer and doctoral student at the University of Victoria.

In a previous career with the Alberta civil service, it was a large part of my job to witness the genius and resilience of Indigenous youth. I would rush from community to community all summer, carrying the sparks of life I would witness from the kids within First Nation communities and Metis settlements into other seasons. Then, in winter—the story-telling season—I would share these observations widely with the supporters and potential supporters of this work.

During one of these meetings, after I mentioned to a business owner we approached to potentially be a partner of this program that part of my family came from a Plains Cree nation in Maswacis, Alta., he mentioned his familiarity with a truck stop owned by one of the neighbouring Cree nations. His attention suddenly became less occupied by the stories I carried than with my background. Turning to make sure our eyes were locked when he spoke, he said: “It’s amazing what people can do when they apply themselves, even a little.”

I can’t remember what the outcome of this meeting was, but I do distinctly remember biting hard down on my tongue to stop a torrent of words that surely would lose me my job from crashing out. And then I remember speaking a form of Cree meditation to myself.

Kiyam. It’s a Cree saying that means “it’s okay,” or “everything will be fine.” In the face of the long history of oppressive and assimilative pressure put on Indigenous peoples, kiyam has become a mantra for Cree peoples, a kind of prayer for resilience. It has become a verb, in that I kiyamed my way out of the meeting, knowing that person’s eyes were not wide enough to see the brilliance of Indigenous youth.

Indigenous people have been saying kiyam, or similar words in other Indigenous languages, for far too long. And the reality is that kiyam is no longer enough of a response to the conditions Indigenous peoples face in Canada today. It never really was, and in many instances, we never really believed it; it was fake news before fake news, an alternative fact to help us get through the day.

But the year ahead will be the year Canada hears from the Indigenous youth the business owner sought to dismiss—not because that’s when they’ll only now start doing impactful things, but because Canada will observe the amazing things they’ve already been doing, every day.

READ: How a new kind of resolution process can support reconciliation

I know this because Autumn Peltier, a 13-year-old girl from the Wikwemikong Unceded Reserve in Ontario, has been advocating internationally for the protection of clean drinking water, taking on what is a disturbingly common hardship within many First Nations in Canada. Her commitment has been recognized in Canada and internationally, as well; she was recently nominated for the International Children’s Peace Prize.

I know this because Indigenous youth spent 2017 teaching the law; this summer, youth from Aseniwuche Winewak Nation, a Cree community in western Alberta, were instrumental in leading University of Alberta students through Cree learnings on law and governance, with the assistance of elder knowledge-keepers.

I know this because Indigenous youth are making their communities safer. Shannen Koostachin spent many years of her life seeking a “safe and comfy school” for students living in Attawapiskat First Nation. She suddenly and tragically passed away in a car accident in 2010—but the legacy of her work has been taken up by Shannen’s Dream Campaign, a nation-wide movement to ensure the basic human right of equal education is realized in Indigenous communities.

But I know that for every Shannen to inspire us, there are thousands of other Indigenous youth who need to use every ounce of a similar dedication and spirit to succeed in the damp, cold, and moldering schoolrooms she worked to eliminate. For every Autumn, there are thousands of other youth using a similar strength to preserve the precarious balance of living in the absence of basic human rights and just being kids. The Shannens and Autumns speak for hundreds of thousands of Indigenous youth in this country, and those coming in the next generations. It’s time we gave them our full attention.

Anishinaabe legal scholar John Borrows talks about the word “nah” in Anishinaabemowin, the Anishinaabe language, as representing a way of observing the world with our whole beings. This occurs by opening fully, with all of our faculties, to what is around us. This is the kind of observation that Canada must apply to the brilliance of Indigenous youth. There are many individuals who already see this shine, and have for generations—but our political and legal bodies must be open with their whole beings as well.

Prime Minister Justin Trudeau is a good case in point. In 2016, he visited Shoal Lake 40 First Nation, a community that has been under a boil-water advisory for two decades, and even assisted a youth in delivering bottled water to homes. In an interview afterwards, he expressed his deepening understanding of the conditions on the reserve, stating the visit made the inequitable circumstances faced by the community “tangible.” Taking his experiences as genuine, this raises the question of where Trudeau’s personal experience became disconnected from his political one, wherein the federal government can continue to ignore court-mandated calls to ensure other forms of equality on reserves.

Nah, then—to borrow from my Anishinaabe relations—represents a medicine for this disconnect. For non-Indigenous Canadians, this means opening Canadian political and legal bodies to their fullest capacity for equality and humanity. We should be beyond being fooled by the ignorance that the law and the constitution creates in Canadian societies. Nah: Canada must see with its whole body. Only then may we be able to reflect the vibrancy and brilliance of Indigenous youth back to them. Then, perhaps, they will speak kiyam to their children—everything will be fine—and really mean it.