Why Biden's Inaugural Address could be counted among the great ones

Gerald Butts: The president delivered a great speech in a time of profound national need. If he follows it with disciplined action, it just might become iconic. 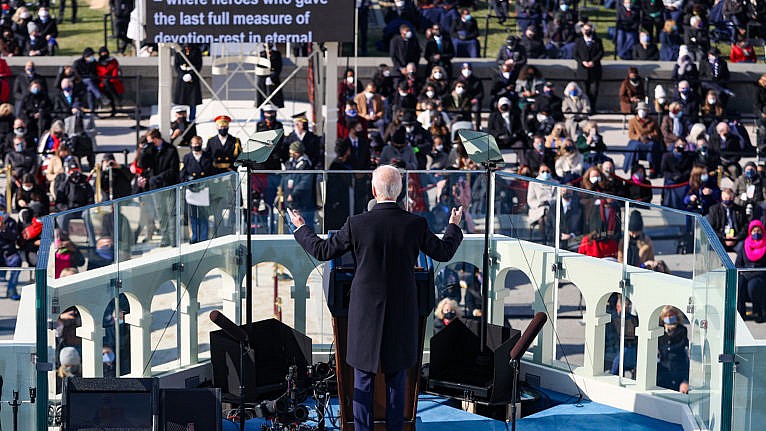 Gerald Butts, a former principal secretary to Prime Minister Justin Trudeau and Ontario Premier Dalton McGuinty, played a key role in managing Canada’s relations with the Obama and Trump administrations during Trudeau’s first term in office. He has also had a hand in some of the most significant political speeches of his generation in Canada, and is now vice-chairman of Eurasia Group, the global risk management firm, where he advises American, Canadian and international clients on geopolitical risk in the U.S. and around the world.

Maclean’s asked Butts to share his observations on and insights into President Joe Biden’s Inaugural Address, a speech he anticipated as “the most important Inaugural since at least FDR’s first in 1933, or maybe even Lincoln’s second in 1865.”

At noon eastern on Wednesday, Joe Biden became the 40th American man to deliver a presidential Inaugural Address. These speeches range from very short (George Washington’s first was just shy of a couple hundred words) to so long they killed the speaker. William Henry Harrison spoke at such length on a cold day that he contracted pneumonia and died a month later. Some are excellent, some are brutal, and most have been forgotten by all but aficionados and historians. You can probably quote lines from four of them: both of Lincoln’s, Franklin Roosevelt’s first and John F. Kennedy’s.

It’s too soon to tell whether Joe Biden’s will be the fifth, but the key ingredients are there.

All political communications are about meeting the moment, and while there’s no moment in politics like the first few of an American presidency, it’s the collision of the speech itself with the context surrounding it that determines its enduring resonance. The speech has to be great, the stakes have to be large and its aftermath has to be consequential.

A nation on the brink and then the aftermath of Civil War. A terrified people facing the calamity of the Depression. The retrospective tragedy of a doomed young president proclaiming the passing of a torch only to be publicly murdered. This is Shakespearean stuff and—as in Shakespeare—the lines are important but the play’s the thing.

Joe Biden’s circumstances are of this unenviable kind. Some 400,000 Americans are dead, the festering national wound of institutional racism has been freshly reopened, the planet is cooking and millions are out of work. Above all, he’s following a president whose diabolical willingness to exploit Americans’ differences has helped to create a country more polarized than it has been since the 1850s.

Inaugurals have identifiable generic markers. The president describes the ways in which the republic is being tested (We’re on the brink of war! The economy is cratering! The Communists threaten our way of life!). He then appeals to moments in American history when the country has overcome other challenges (We won the war! We ended the Depression! We defeated fascism!). He sources this past success in the values Americans share, commonly by quoting the Constitution and the Christian Bible. Finally, he prescribes a way forward—usually one that uncannily resembles his campaign platform.

The best of these addresses don’t hinge on programmatic elements or policy arguments. Say what you want about America’s civic values and American history’s frequent distant wanderings from them, Americans believe their catechism. The best of their leaders remind them of those values with imagination and vigour, describe without wagging their finger how they’ve fallen short of them, and project confidence that they can mend their ways.

Nobody did this better than Abraham Lincoln, which is why his second inaugural is normally judged the best in history. It is a beautifully written elegy for the antebellum United States and its core contradiction: a nation built on slavery while proclaiming that all are created equal. For Lincoln, the cataclysm of the Civil War was the sound judgment of a just God on the horrors of slavery, for which every American was responsible and to which every American was duty-bound to remedy. The generosity of its conclusion is rightly famous, but for me the money lines are those that address the heart of the matter. Speaking of the pervasive evil of slavery and the horrors of war, Lincoln ascribes a stoic justice to their coincidence:

“Yet, if God wills that [the War] continue, until all the wealth piled by the bond-man’s 250 years of unrequited toil shall be sunk, and until every drop of blood drawn with the lash, shall be paid by another drawn with the sword, as was said three thousand years ago, so still it must be said “the judgments of the Lord, are true and righteous altogether.”

In other words, we are where we are because we have not lived up to the truths we say we hold self-evident. Providence has delivered us one heck of a kick in the national pants, and since we all believe in God, shouldn’t we consider it just? It is the rare kind of politician who can make this kind of moral argument without sounding moralizing. As the historian William Lee Miller wrote about Lincoln, it’s one thing to make an argument against slavery; it’s another entirely to make a persuasive one to Americans in the middle of the 19th century.

Biden’s inaugural was at its finest when it reached for that tone and level of argument. He checked all of the generic boxes described above, most memorably when he compared the suffragette movement with Kamala Harris’s presence on the dais. If you doubting whippersnappers want proof that change can happen, he seemed to say, look at your new vice president. It was a powerful moment.

But if this speech is remembered with the greats, it won’t be for those flourishes. It will be because his diagnosis of the central illness facing the United States turned out to be right: that extreme polarization is the primary cause rather than a symptom of the country’s problems. That what the country needs most is leadership deaf to the divisive cacophony of contemporary politics, and unerringly focused on the transcendent ideals that Americans tell themselves they believe in. He may have quoted St. Augustine, but his argument was Lincoln’s. “A people are a multitude defined by the common objects of their love.”

Like Lincoln, Joe Biden believes both that those common objects are American values, and that his fellow citizens are able to reckon with the distance they’ve travelled from living them.

Will we rise to the occasion, is the question. Will we master this rare and difficult hour, when we meet our obligations and pass along a new and better world to our children? I believe we must. I’m sure you do as well. I believe we will. And when we do, we’ll write the next great chapter in the history of the United States of America, the American story.

None of this was to suggest that solutions would be easy. His descriptions of the country’s problems were direct and vivid. He told hard truths straight, all in a tone of optimism about the future. It’s a powerful formula too seldom followed. When leaders do, people usually support them. When leaders do it in the context of profound national need and follow through with disciplined action, people build monuments.

It’s easy to be cynical about such messages, but cynicism never solved a problem. If you’re inclined to be negative about the United States, you might ask yourself what negativity has done for Americans lately.

As good neighbours, we can hope that our American cousins love the United States and its professed values as much as their new president does.