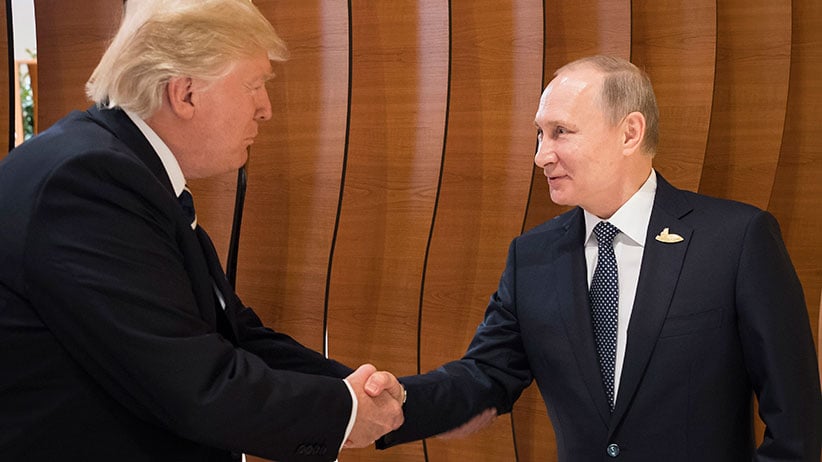 In this photo provided by the German Government Press Office (BPA) Donald Trump, President of the USA (left), meets Vladimir Putin, President of Russia (right), at the opening of the G20 summit on July 7, 2017 in Hamburg, Germany. The G20 group of nations are meeting July 7-8 and major topics will include climate change and migration. (Steffen Kugler/BPA/Getty Images)

For a man who claims there’s no fire when it comes to Russia, President Donald Trump certainly embraces the role of arsonist.

The latest addition to the collection of hidden or delayed Russian disclosures from Team Trump? That the President, in addition to his official two-plus hour bilateral meeting with Russian President Vladimir Putin at this month’s G20 summit in Hamburg, also had an hourlong chat with Putin at the leaders’ dinner, accompanied only by a Russian translator.

The President is playing this latest revelation down as—surprise, surprise—fake newsery, claiming that it was idle chat at a dinner that was known to all.

Trump has a point. But only to a point.

MORE: The meaning of that Trump-Putin handshake

For those not acquainted with the finer points of summitry, the G20 typically does feature a dinner with spouses that involves some form of cultural component, usually a concert highlighting local music. And the media knows about it. But those dinners are closed to reporters and are largely work-free zones, not moments to conduct the serious diplomacy suggested by an hour-long discussion.

A typical summit meeting involves four types of encounters between political leaders: working group sessions where all leaders sit around the big table and make interventions on the issues at hand; bilateral meetings on the margins of the working group sessions where leaders and their relevant ministers and staff meet one-on-one with another nation to hash out issues specific to their relationship; so-called “pull-asides”, which last seconds or a few minutes and are less formal versions of bilateral meetings, usually held just to be read out to press to say that two leaders have “met”; and social encounters like the dinner where President Trump and Putin had their second discussion.

Casting through my dimming memories from Stephen Harper’s PMO, I’m having trouble recalling a single example of when Harper had a chat of a similar length to Trump and Putin’s at a G20 spouses dinner. By this point in the proceedings, the leaders are tired from either jet lag or their meetings, and are looking only for a meal and a warm bed.

Most of the time at these dinners, leaders chat with whomever they’re sat next to—this is usually arranged by the meeting host—and might occasionally pop over to another guest if they want to say a friendly hello or, if that leader is a good friend, catch up on family.

What I do know, though, is that if Stephen Harper had a substantive chat with any leader at one of these dinners, his first stop after the dinner was to his foreign affairs advisors—both political and departmental—who would be told in as much detail as the possible about the conversation. If the prospect of that conversation was too far away, the prime minister’s executive assistant (typically the only staff member near the dinner room) would have been briefed and asked to transmit the information to the appropriate members of the team.

Of course, none of this gives any insight into what President Trump discussed with President Putin. It could be nothing. But in my experience leaders with nothing to say don’t take three-and-a-half hours over two meetings in a single day to say it. From my own experience of how these things work, the official White House line—that it was “pleasantries and small talk”—just doesn’t ring true.

And with the starvation diet currently being fed to the U.S. State Department, it’s entirely possible that no record of the conversation exists, other than in Donald Trump’s memory. This places the President at a distinct disadvantage should the Russian side ever choose to disclose—either on or off the record—the contents of their conversation. Given Trump’s rather fickle relationship with the truth, from crowd sizes to Obama wiretapping and conversations with James Comey, who would be willing to take the President’s word on it if it did?

Perhaps worst of all, while Trump might not know what he’s doing, or how these summits are typically done, one man certainly does: Vladimir Putin. For an ex-KGB man who’s used to outfoxing serious leaders and diplomats, the President must have the look of an easy mark.

At the very minimum, failing to disclose the meeting represents horrible optics. By appearing to place more trust in Vladimir Putin than his own State Department, Trump is giving serious ammunition to his many critics who believe the President has something to hide. But that a president whose judgment on Russia is in question—and under congressional and Special Counsel scrutiny—could have such a conversation and think nothing of it can only suggest one of three things: ignorance, stupidity, or malice.