Why Godzilla vs. Kong perfectly captures the tenor of our times

Marie-Danielle Smith: Movies can help us respond to humanity’s scariest moments. This one calls for a big gorilla with an axe. 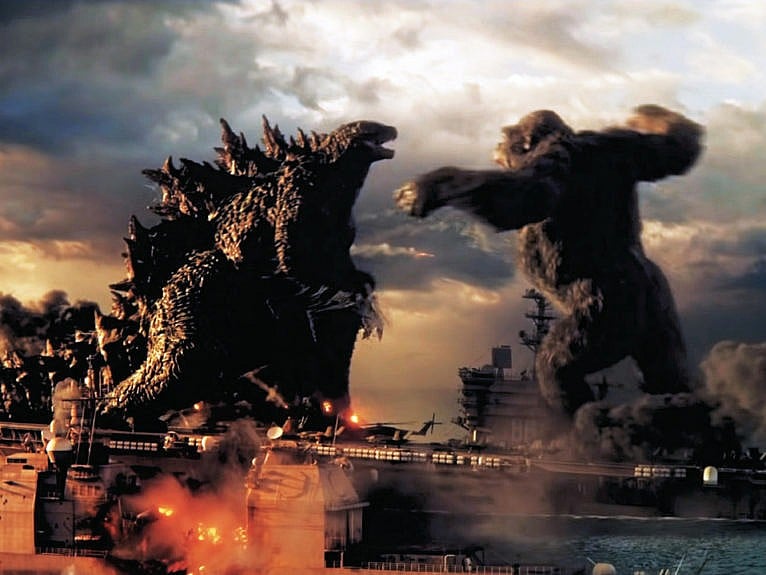 (From left) Godzilla, Kong, in a still from the forthcoming 2021 film (HBO Max/Everett Collection)

Godzilla vs. Kong, out in March, will be the 36th Godzilla film, the 33rd to feature a gigantic co-star. We undeniably love a good monster movie: the dose of unreality, the escape, the jolt from our doldrums; the feeling when our off-screen concerns become, fleetingly, as inconsequential as the ant-sized humans whose habitats are being ravaged on screen.

Critical acclaim is beside the point. Bad writing, plot holes or poor (human) character development will never eclipse the rip-roaring visual of two behemoths locked in an extended wrestling match. A Rotten Tomatoes score is no match for the exquisite CGI of an angry colossus refusing to back down. It is unlikely that Godzilla vs. Kong will fail to meet my expectations, roughly summed up as “giants brawling destructively.”

READ: What does the future of Black filmmaking look like?

The premise feels like an echo of our vulnerability, our powerlessness next to forces we struggle to control. As Godzilla lays waste to city apartment blocks, tearing through urban populations across the globe, no one is safe from his path. No one is immune to the violence. Only a small, multinational group of experts can hope to understand how the titan ticks; the rest of the world relies on their ingenuity. Sound a bit familiar? (The symbolism gets a little derailed once the scientists’ ingenuity is revealed as “let’s wake up this other baddie.”)

Of course, in the planning stages for this particular blockbuster, it’s unlikely anyone considered that a plot loosely described as “two monsters fighting all over the place” would feel metaphoric of a deadly virus. No one would have predicted its release direct to streaming platforms at a time when most people are unable to visit a theatre. No one imagined WW84 as a cure for the pandemic blues either and, well, it’s good they didn’t.

Over the last century, Hollywood has reacted to humanity’s scariest moments with fodder that, at least through an American lens, gave audiences an outlet to reclaim their fears and watch their enemies be vanquished anew. Anti-terrorism serials gained massive popularity after 9/11. Fully 75 years after the end of the Second World War, movie heroes are still punching Nazis to great effect.

How will the world of entertainment react to COVID-19? With the United States hit especially hard, will other countries’ film industries rise to greater prominence? Will the next generation of action-adventure romps fetishize scientists in line with soldiers and intelligence agents? Will the next soapy drama or hit sitcom centre on the lives of a ragtag crew of epidemiologists? Or will we lean even harder toward flicks with plot lines that are basically “HULK SMASH”?

Those of us who miss the cinema are eager to find out. As winter drags on and the apartment walls close in, I’ll take a monster movie or two in the meantime.

This article appears in print in the March 2021 issue of Maclean’s magazine with the headline, “Monster smash.” Subscribe to the monthly print magazine here.