Patricia Treble: 'If there is anyone who understands the suffering in the United States, it is Biden, a man forged by the crucible of heartache' 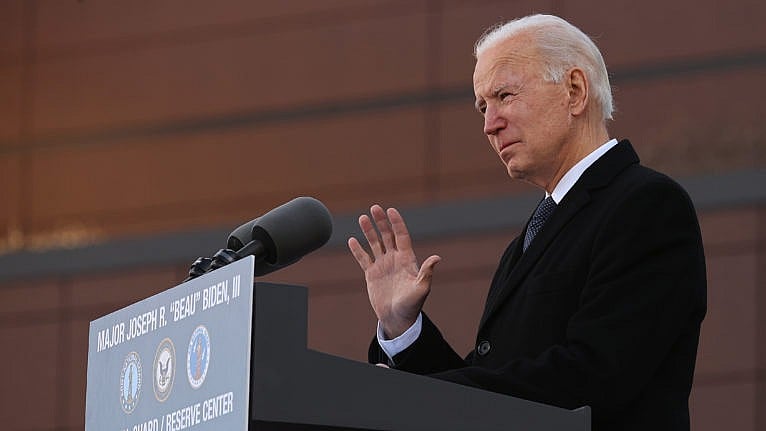 Inaugurations may be perceived as national gatherings but they aren’t, not really. After attending Barack Obama’s second inauguration in 2013 as a journalist, I left feeling that Washington, D.C., was a city that focuses most of its attention on the rich and connected rather than the American people. If you have money or connections, inaugurations are a schmooze-apalooza, as you are whisked around the locked-down city to exclusive parties and events, whose pricey tickets bestow close encounters with the politically powerful, including the president. If you can’t buy access, then taking part means blisters and sore feet, as ordinary folk walk, and walk, and walk to events blocked off from normal traffic and transit. Even the balls are depressingly pedestrian affairs for ordinary folk, as thousands crowd into drab convention centres to catch a fleeting glimpse of the president and first lady dancing before everyone is left to walk home, in the cold. All that is gone this year.

The pandemic stopped any hope of a large gathering to celebrate the quadrennial event. The parade of marching bands from the four corners of the United States was jettisoned along with the massive inaugural balls. Any distanced events survived initial planning were abruptly changed after the attempted insurrection two weeks ago. Now, the National Mall, where hundreds of thousands usually stand, is sealed by rings of security barriers.

Yet this stripped-down, locked-down inauguration perfectly suits Joe Biden. It plays to his strengths of empathy and compassion, his ability to connect with others and his desire to reach out beyond the Democratic base. If there is anyone who understands the suffering in the United States, it is Biden, a man forged by the crucible of heartache.

RELATED: It’s Joe Biden’s world now. Can he fix it?

“This is a man that believes in people. He has empathy. He cares about people,” said Democratic Congresswoman Debbie Dingell on CNN on Monday. The Michigan representative, who has been harassed by right-wing groups loyal to Trump for months and who was in the Capitol when it was stormed, is convinced Biden is who the country needs: “He’s going to actually bring people together and I think he’s the right man at the right place and the right time for a reason.”

Joe Biden may have been a senator for 35 years and then a vice-president for eight years, but he was always Joe from Scranton, the guy from a working class family in Pennsylvania who took the train to work in Washington each morning before returning to his own family in Wilmington, Delaware, each night. He likes being an ordinary guy. The New York Time reported that he chides aides who use a lot of academic language, telling them, “Pick up your phone, call your mother, read her what you just told me…If she understands, we can keep talking.” He’s a guy with a stutter who knows what it’s like to have others mock him, a man who automatically took off the American flag pin from his jacket to give it to a curious boy while out on the campaign trail. After his time as vice-president ended, Biden didn’t buy a flashy mansion in Florida and spend the winter golfing at an exclusive country club, but purchased a vacation home in Rehobeth Beach in Delaware, where he often cycles through the state park.

RELATED: President Biden and a world of trouble

The only civilian groups participating in-person at the inauguration are the drum lines from Biden and Kamala Harris’s alma maters. The event is going to be far more of a TV/online affair that focuses on the country as a whole, much like the Democratic National Convention, which featured a quirky roll call of the votes of the states and territories—remember the guy with a plate of calamari representing Rhode Island? And that inclusiveness will drive home Biden’s message that he’s working for the entire country, not just those who voted for him.

He won’t even have to deal with Donald Trump attempting to steal the spotlight, as presidential historian Michael Beschloss pointed out in a tweet: “Just as well that Trump won’t be at Biden inaugural. Don’t need him rolling his eyes and making faces at the camera while Biden speaks. When leaders come together to display national civility and unity, it has to be genuine and heartfelt.”

Usually, inaugural speeches are designed to be as grandly ornate as their setting, be they the soaring oratory of Barack Obama or Donald’s Trump’s darkly foreboding “American carnage” address. There are frequent interruptions for applause, made more awkward by the huge area, which means people standing at the back often begin clapping well after those closest to the president have stopped.

But Biden is best at giving more intimate speeches, and he’ll have that chance at this inauguration as he will be speaking in front of 1,000-odd invited guests gathered near him. Meanwhile, millions will be watching from home, just like they did during the Democratic National Convention, when he spoke in a large space but without a big live audience, allowing for a fluidity rare for such an important speech.

“If you entrust me with the presidency, I will draw on the best of us, not the worst. I will be an ally of the light, not of the darkness,” Biden said during that convention speech. “United we can, and will, overcome this season of darkness in America. We will choose hope over fear, facts over fiction, fairness over privilege.”

Finally, Joe Biden’s inauguration will bestow him one final gift. It will be so radically different from previous ones as to make comparisons—crowd sizes, applause lines—meaningless. Biden has constantly been compared to his former boss, Barack Obama, and the outgoing president, Donald Trump, yet, because of circumstances beyond his control, Biden gets to forge a path entirely of his own. How perfect is that?