Why is Patty Hajdu still the minister of health? 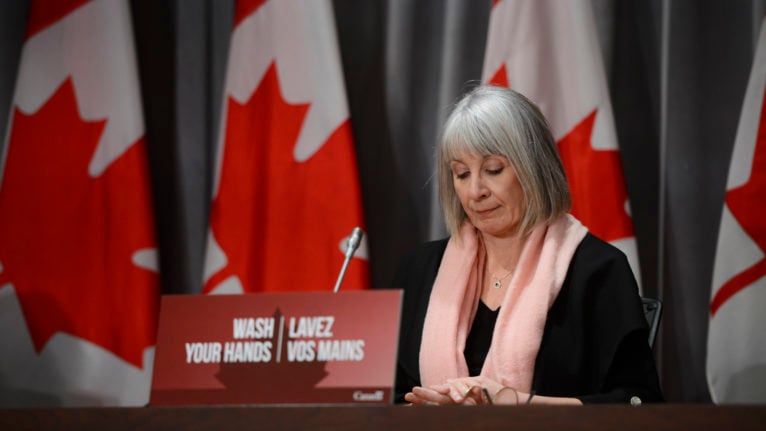 Hajdu takes part in a press conference on Parliament Hill during the COVID-19 pandemic on May 4, 2020 (CP/Sean Kilpatrick)

Somewhere in Communist Party HQ in Beijing, somewhere deep in the Division of Digital Monkeybusiness, sits a staffer who monitors the Canadian media. Heck, there might even be two of them. And boy, do they laugh. Every day they lolz until their cheeks are stained with tears of joy.

The source of their latest chuckle? Federal health minister Patty Hajdu. Again. Indeed, it turns out Hajdu is a bit of a favourite with the Boys in Beijing because she is the last western politician willing to defend China’s dead-slow coronavirus response, a trick she repeated on one of this weekend’s political chat shows, where she argued that all countries had difficulty handling the pandemic. The show’s headline writers couldn’t believe their luck.

Make that all headline writers. Hadju’s foot is now buried so deeply in her gullet on the subject of China it’s attracting attention in outlets like the Washington Post, whose foreign affairs correspondent Emily Rauhala tweeted her abject disbelief at Hadju’s latest intervention. Hasn’t she seen the evidence of China’s virus obfuscation, Rauhala asked? It appears the answer remains ‘no’. For a supposedly evidence-based bunch, Team Trudeau seems particularly resistant to the facts on China.

Yes, yes, it might just be Hajdu playing three-dimensional chess while the rest of us follow the checkers being steadily swiped into Chinese hands. And yes, it might be another stage in the rope-a-dope(a-dope-a-dope-a-dope) strategy of freeing Canadian hostages Michael Kovrig and Michael Spavor, but does it have to be so servile and embarrassing? Why can’t this government—just once—tell it like it is on China?

Of course, this presumes it is within this minister’s or this government’s ability to tell it like it is. On anything, including the coronavirus. The blockbuster revelations from author Bob Woodward over President Donald Trump’s downplayed response to the coronavirus have also cast a problematic light on actions taken north of the border. If the U.S. President knew of the severity (and transmissibility) of the virus in early February, then there is little doubt Canada knew too, given our deep intelligence links to the U.S. And yet, little was done to prepare Canada for the coming storm. As late as March, Minister Hajdu was telling the House of Commons the virus was no biggie. Did she honestly not know? It beggars belief.

Hajdu’s Covid-blindness is partially explained by the sidelining of the government’s pandemic alert system (known as GPHIN) in May 2019, a system Hajdu admitted she knew nothing about when she took over as health minister after last fall’s federal election. The decision to shutter GPHIN is baffling even without hindsight (see: evidence-based government) and doubly surprising when you consider the mountains of money the government was spending before the pandemic. It is clear former cabinet minister Ginette Petitpas Taylor (since demoted to deputy whip) didn’t quite have a grip on her portfolio when she was the one occupying Hadju’s chair. Nor, on the available evidence, is Hajdu an upgrade.

A favourite parlour game is to wonder what Jane Philpott—the last (and only) health minister of import and consequence in the Trudeau era—would have done had she her capable mitts on the pandemic response. Sadly, we’ll never know, what with Philpott having gone the way all female ministers who stand up to Trudeau seem to go: out the door. If only Trudeau had the courage to sack his ministers on merit.

Because with infection rates rising again, and confusion across much of the land as to what comes next, now is exactly the time for Trudeau to cast about for a heavier hitter to replace the embattled Hajdu. Sure, Canada isn’t doing as poorly as Donald Trump’s America, but when the global laggard is your preferred comparator you’ve already lost the argument. The pandemic will be with us for some time and the country’s response could stand to be sharper.

So guess what, Patty Hadju: You’re all set to be “Canada’s Candidate” as director-general of the World Health Organization.