Why is the government not playing Justin Trudeau to his strength?

Andrew MacDougall: The Prime Minister's greatest asset is his ability to connect with people, and it's been missing in his responses to the pandemic 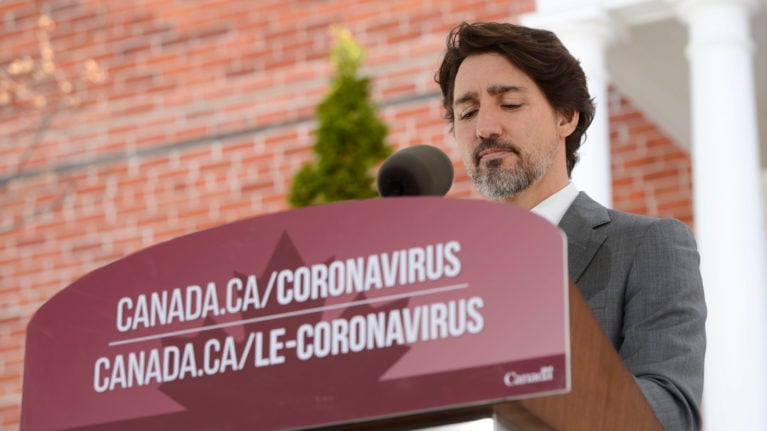 Trudeau speaks from his now familiar spot in front of Rideau Cottage in Ottawa on April 29, 2020 (CP/Sean Kilpatrick)

Where is Justin Trudeau on COVID-19?

In one sense, it’s a ridiculous question. The Prime Minister has been out nearly every day since Canada went into the coronavirus-induced lockdown, answering questions from the media from the front steps of Rideau Cottage. And on rare days he’s even managed to do the same with members of the opposition in the House of Commons.

Seen from another angle, however, Trudeau has been strangely absent. The Prime Minister who loves to road trip across the country connecting with Canadians on listening tours isn’t reaching out much at all. The Instagram feed is muted. The Facebook live function is stuck regurgitating the daily media availability. The tools of modern communication—and connection—aren’t being made to work their Trudeau magic from quarantine.

And while Trudeau’s Twitter feed remains a blizzard of information, it’s just that: information. There is precious little in the way of a personal touch, or much in the way of empathy either. Trudeau’s secret weapon—his freakish ability to connect—is being left in the locker.

Bar a stiff March video on the need to wash your hands and stay two metres apart, Trudeau hasn’t spoken directly to camera to walk Canadians through the nightmare they’re now living. Or invited a dialogue. Instead, we’re receiving a steady stream of classic greetings that would have come without COVID-19: for Ramadan; for Vaisakhi; for National Volunteers Week, etc. All delivered from the same set as his daily media encounters.

The closest thing we’ve seen to vintage Trudeau on coronavirus is the Q&A session he had with children regarding the pandemic. It was a nice, needed, and humanizing touch from the Trudeau team, and it was the Prime Minister at his best. It was also almost a month ago.

You’ll have to go back even further—March 15—to find Trudeau’s last one-on-one interview with the media; they’ve been absent from the comms rota since the coronavirus hit with full force. One imagines the Prime Minister is incredibly busy, but if Dr. Theresa Tam can sit down for a two-part chinwag with the CBC you’d reckon he’s got the capacity, too.

The advantage of not doing any one-on-one interviews is clear: Trudeau doesn’t want to be drawn into the unwinnable thicket of retrospective decision-making, nor will he want to dissemble when pressed on some of the challenges Canada is facing, whether on PPE or care in seniors’ homes. But at some point calculation becomes cowardice. For its part, the Prime Minister’s Office says separate interviews aren’t being arranged because the press conferences are reaching big audiences.

But we haven’t even gotten a mushy soft-focus interview with Trudeau and his wife Sophie—usually a surefire winner—whose infection by COVID-19 is what originally bottled Trudeau up for his own quarantine in his now favoured press position on the grounds of Rideau Hall. What better chance could the Prime Minister have to be real and relatable to the many families going through their own corona worries? And yet, nothing.

Trudeau surely realizes that others have it worse, but other people aren’t the Prime Minister with a platform. Boris Johnson’s hospitalization in the United Kingdom is what made the virus snap into focus for many here in the U.K., and his heartfelt video of appreciation to the NHS foretold of the much more cautious prime minister we now see during his recovery, with Johnson amongst those arguing most strongly for a continued lockdown of Britain. Trudeau missed an opportunity to pull the same trick.

The uncharitable interpretation of Trudeau’s muted presence is that he’s ducking accountability, as his government has tried to do by limiting opposition scrutiny during the response to COVID-19. And while press conferences are a form of accountability, they’re also the easiest format in which to give it the slip, provided the holder of said press conferences is committed to their talking points, as Trudeau most definitely is.

Nothing of much import gets said anymore at Trudeau’s daily rendezvous’; they’re now happening because we’ve gotten used to them happening, not because they’re telling us anything we need to know. Well, unless you’re a fan of the Snowbirds, whose cross-country fly-by plan was yesterday’s ‘news’.

A more pragmatic explanation is that we’re in this crisis for the long haul and Trudeau doesn’t want Canadians to get sick of his face when he doesn’t have all of the answers and they have more important things to worry about. And given the grief Trudeau got over the Easter break for visiting his family at Harrington Lake, where Sophie and the Trudeau children are now living out the lockdown, perhaps there really is no hope of a fair shake with everybody still at panic stations. Maybe hunkering down is the better play.

Which makes it even more strange Trudeau isn’t flexing his muscle and going around the press on social media. He doesn’t have to be Mike Pence and rock up to a hospital without a face mask, but he could still show his face across Canada virtually in a way that makes him seem engaged and empathetic.

This version of Trudeau still exists, as was evidenced by his response to the tragic Nova Scotia rampage, the crash of a Canadian helicopter on a NATO mission, and the unveiling of his assault rifle ban.

That we’re instead seeing the deflated version of the man who has moped around since his election win last year, deferring much of the work of government to surrogates, doesn’t augur well. The COVID-19 mess needs Trudeau’s 2015 energy and charisma, not 2020’s bummer version of the man who used to get everyone excited.