Opinion: While much was made over Trump and Kim's sometimes awkward chumminess at their summit, that will be important if peace is to endure 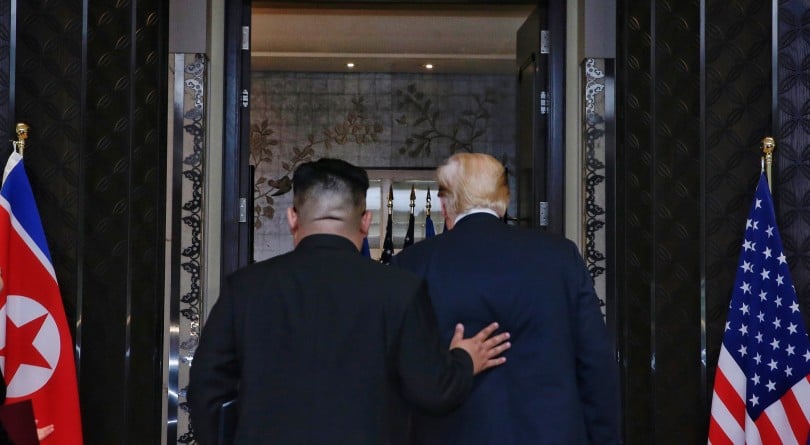 No one quite knew what was going to happen when U.S. President Donald Trump and North Korean leader Kim Jong Un met for a historic summit on Sentosa island, just off Singapore’s southern coast. Indeed, for 51 million South Koreans, the Korean diaspora, and diplomats abroad, this summit was more than just a photo op—there were serious consequences for the future of the Korean peninsula, especially if it failed. Citizens around the world were glued to their phones and televisions as they followed the latest news. One high-ranking South Korean official from the Blue House described the feeling as “a student anxiously waiting for the exam result.”

And there were plenty of good reasons to be anxious. These two leaders have a track record of being unpredictable, mercurial, and hostile, and it was entirely possible that one of them might decide to walk away, or post a provocative message on Twitter. For the last seven decades, the United States and North Korea have shared a history of mistrust and hatred that goes beyond personal relationships between leaders and infiltrates fundamental policy. Children in North Korea are taught to hate the “Yankees” through propaganda posters, museums, and daily lessons, and they practice shooting American soldiers in their playgrounds; the North Korean government defends its excessive military spending and nuclear weapons programme as a self-defence mechanism against “American hostility.”

So it might be surprising, if not confusing, that it went off without a hitch; the two leaders even signed a joint agreement. And North Korea is now signalling its willingness to give up its nuclear weapons programme, one in which it has invested millions of dollars for the past 30 years, carefully designed by the best and brightest of its population.

Many, however, are critical of the ambiguous nature of the summit’s joint agreement. Some say that Trump gave up a lot to North Korea without cementing a clear verification process: The reference to “complete, verifiable, irreversible denuclearization” (CVID) has been dropped, and there is no reference to a timeline for denuclearization. Instead, Trump praised Kim at the press conference as a reasonable negotiator, suggesting he would potentially reduce U.S. troop presence in South Korea and stop America’s “war games” in the region, with Trump even calling them “provocative”—the exact wording used by Pyongyang for decades. Although Trump is openly critical of traditionally friendly leaders like Canadian Prime Minister Justin Trudeau, he seems to get along just fine with Kim, and many memes have flooded the internet that show Trump’s effusive friendliness toward the North Korean leader.

Others are critical of the top-down approach, and some worry that the president does not actually understand the denuclearization process. Why did they agree to meet one-on-one with just the translators? There are many who believe Trump did not achieve much in terms of a firm commitment from North Korea while undermining the strength of the U.S.-ROK alliance.

But this kind of bond-building, as awkward as it may appear, is important for the relationship. As evinced by the one-on-one meeting, there appeared to be a desire to create a certain level of intimacy, as a deal is much easier to make with fewer people in the room, and issues like verification will take time and trust between the two traditional adversaries. In fact, the only way to get anything done with North Korea is by dealing directly with its dictator—political will matters far more when it comes to changing Pyongyang’s behaviour. Whether we like it or not, it is important for Trump and Kim to get along.

It’s important to remember that just a few months ago, the two were engaged in personal attacks and war of words on social media, throwing the entire international community into a tornado of anxiety, fear and even paranoia, given that they were leaders of two countries with very significant military capabilities. Misunderstanding and miscalculation will be deadly and every effort must be made to improve their channels of communications. As in any human relationship, expectations should be kept low, but frequent personal contact will help bridge the gap. If they are serious about breaking the vicious cycle of provocations and rhetorical threats, they must maintain a cordial and respectful relationship, despite their political, economic, and age differences. This is why the Trump-Kim summit was historic for taking the first step forward needed for a constructive future ahead. Leaving the past behind took a lot of courage for both leaders, and we must recognize the historical nature of this thaw in the relationship regardless of our personal feelings toward each of them.

While it is easy to be cynical about Pyongyang given their track record or misbehaving and violating international norms—as Justice Michael Kirby reported in the UN Commission of Inquiry report, the North Korean regime is committing serious crimes against humanity on its own people—we are working with a radically different set of circumstances this time. Unlike his father or grandfather, Kim is less ideological and much more open to outside influences because of his education in Switzerland. He has shown a willingness to cooperate with South Korea’s President Moon and they are already working on the infrastructure projects and family reunions discussed at the Panmunjom summit. And North Korea’s state media has been publicly reporting every details of both the April summit between Kim and Moon at Panmunjom, as well as the latest Trump-Kim summit, showing how Kim is now making himself accountable to his domestic population as well—a clear departure in terms of North Korea’s defence policy and reflecting the desire for change within North Korea’s elite circles.

That’s in part because things are shifting in North Korea. A growing number of North Koreans have defected in the past few years, as the country has seen the rise of a merchant class that values commercial interests more than ideological allegiance, and the infiltration of smart phones and cultural products into the country from China, which has exposed ordinary North Koreans to the lifestyle in South Korea. In addition to economic pressures from sanctions and political pressures from Beijing, Kim has legitimate reasons to be concerned about the future of his regime. A vast majority of North Koreans live in poverty, their infrastructure is crumbling, and over 90 per cent of roads in the countryside remain under-developed. North Korea can no longer afford to survive as a Hermit Kingdom that generates income through illicit arms sales, cyber attacks and deals with China. Kim is a dictator who has shown a ruthless attitude towards his people and his own family, but he has vested interest in gaining economic concessions and security guarantees, and it is far better to sit down with him and try to change his behaviour, rather than being cynical or indifferent.

Ultimately, making durable peace on the Korean peninsula will require still more work. A genuine peace treaty will be needed to replace the 1953 Armistice Agreement, which will require cooperation from China and the U.S., as well as serious efforts from both Koreas to improve their inter-Korean relations at all levels. Canada, as a country that sent third-largest troop contingent to the Korean War—and who should be seeking to maintain and expand trade portfolios in Asia, especially recent events with its closest trading partner—also has a vested interest in seeing through a new peace agreement.

Koreans on both sides of the 38th parallel understand that peace is the only viable option for the future of the Korean peninsula. Negotiations are already under way between Washington and Pyongyang to hash out the details of timeline, accountability measures, and the logistics of verification. Some experts predict that it may take up to 15 years and a coherent long-term strategy on the part of the entire international community for North Korea to get to complete denuclearization. The reactive ad-hoc approach we have seen to this date will not work.

As the Korean proverb says, “You cannot spit on a smiling face”—maintaining a good relationship, even with your adversaries, is important. Trump and Kim, for all their faults and flaws, managed to create good first impressions. Now the challenge is for their respective teams to take advantage of this momentum. Patience and persistence will take us far in that journey.