Why it's dangerous to equate the Left and the Right

Rick Smith: The two sides don't share equal blame for the sad state of politics. Only the Left is seeking answers to the big challenges of the day. 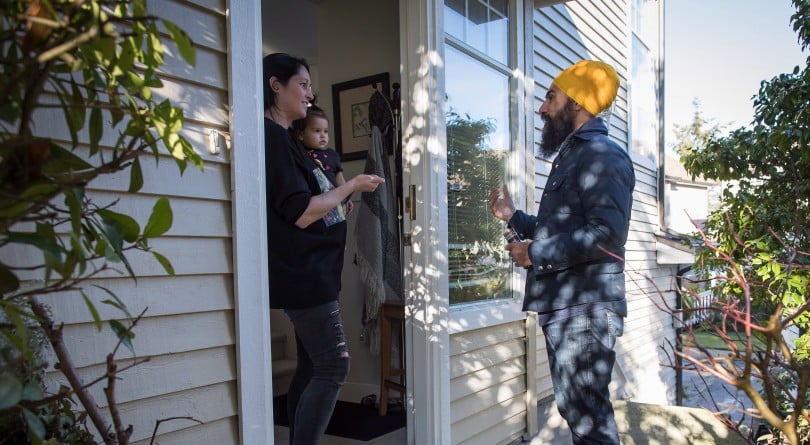 Singh knocks on doors for his by-election campaign in Burnaby, B.C., on Saturday Jan. 12, 2019. (THE CANADIAN PRESS/Darryl Dyck)

Below, the Broadbent Institute’s Rick Smith responds to our issue.

For reasons that are perfectly understandable, many believe we are living in an age of uniquely toxic and rancorous politics. From Donald Trump’s racist rhetoric to Europe’s atmosphere of rising nationalism and pervasive anti-immigrant sentiment there is a growing sense of crisis and anxiety in liberal democracies about which many are rightly concerned.

But amid this climate, it has become fashionable to contend—particularly in the media—that left and right share equal or near equal responsibility for this state of affairs. The equivalence isn’t simply false—in today’s world, it’s downright dangerous. In this all-too-popular framing of current events, politics are imagined to be a kind of horseshoe—with left and right diverging from a supposedly reasonable, level-headed middle ground and converging at each end. To put it mildly, this is a case of “both sides-ism” at its worst.

On all of the major questions facing humanity today—climate change, inequality, defending and deepening pluralism in an age of globalization —the left is working to find answers. True, in some areas we are still coming up short. For all the achievements of left movements in the 20th century, from the welfare state to universal healthcare to progressive labour legislation, inequality remains a deep and abiding fact of Canadian life. Despite successfully making the environment a major issue of public concern, there is still much work to be done if we are to avert the coming climate crisis. Racism and the discriminatory treatment of racialized Canadians are still tragic realities, human rights and equity laws notwithstanding.

Challenges like these and the moral necessity of tackling them is precisely what animates today’s left in Canada and abroad. Yes, their urgency may inspire impassioned, even angry critiques of the political status quo and what can sometimes be difficult, needlessly fractious debates within our own ranks. Some believe this makes the left and right fellow travelers amid the ongoing crisis of liberal democracy. Nothing could be further from the truth.

READ MORE: This is what’s wrong with Canada’s Left

A little historical perspective serves us well here. In the 20th century, left-wing anger gave us minimum wages, weekends, Medicare, and environmental regulation—institutions cherished by millions of Canadians. Even in some of its earlier and less hardline incarnations, the right resisted these reforms and sometimes sought to push things in the opposite direction.

Much the same holds true today. While prominent left-wing figures like Bernie Sanders or Jagmeet Singh indeed give expression to anger, its targets are corporations who exploit their workers or extremely wealthy people who don’t pay their fair share of taxes. The ultimate goal of this anger is to overcome visible injustices and make material gains for working people, young and old, across all sections of society. The same can be said for groups like Black Lives Matter or #MeToo, which are giving constructive expression to justified anger at discrimination and bigotry on both sides of the border.

The right is not, to put it kindly, either doing the same or searching for answers to the major challenges facing our societies today. In conservative parties across the country, climate change denialism (or its close cousin foot-dragging-ism) runs rampant—as evidenced by the recent actions of the Ford government in Ontario and the persistent hostility of the conservative movement to common-sense environmental policies such as cleaning up electricity production, or electric vehicle mandates or carbon pricing.

It’s also become evident that there is a real and visceral ugliness festering on the fringes of conservatism, one made frighteningly visible by social media. And, in the age of Trump, elements of even the mainstream right seem increasingly willing to flirt with exclusionary nationalism and entertain the crudest forms of xenophobia and cultural resentment.

This became all-too apparent during the Conservative leadership race, which made headlines in part thanks to Kellie Leitch’s dog-whistle proposal for a “values test” on new immigrants and Maxime Bernier’s embrace of memes popular within the alt-right. (Throughout a generally cordial contest, by contrast, NDP leadership hopefuls politely debated how best to build economic security for Canadians, fight climate change, create a national Pharmacare program and achieve tax fairness.)

The type of anger channeled by this style of politics ultimately rests on ignorance, prejudice and misinformation. Rather than offering constructive solutions to the problems we collectively face, it seeks to assign blame to particular people and groups. On the hard right, now occupied in Canada by figures like Ezra Levant, conspiratorial musings and open campaigns of demonization have more or less become common currency.

With the stakes being as high as they are in politics today, debates will inevitably prove divisive and difficult. But in their attempts to grapple with our anxious political moment, pundits and commentators alike should be careful not to conflate individuals and movements fighting injustice with those pursuing it as their animating principle.

Rick Smith is the Executive Director of the Broadbent Institute.

MORE ABOUT LEFT VS RIGHT: