Why Jason Kenney's proposed referendum is so puzzling 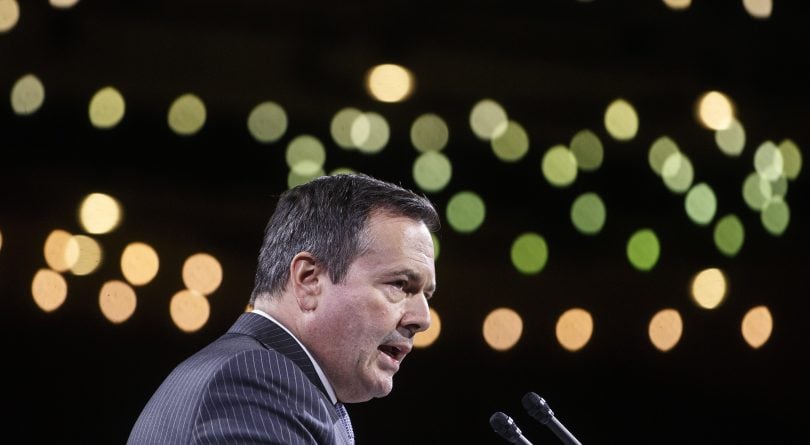 Alberta Premier Jason Kenney delivers his State of the Province address to the Edmonton Chamber of Commerce in Edmonton on Oct. 29, 2019. (CP/Jason Franson)

Max Fawcett is a freelance writer and the former editor of Alberta Oil magazine. Previously, he worked in Alberta’s Climate Change Office.

It wasn’t that long ago that Encana, one of Canada’s largest oil and gas companies, was breaking ground on an ambitious new head office tower that would redefine the Calgary skyline and serve as a testament to its own global aspirations. But like many of Calgary’s oil and gas companies, those aspirations have been dashed over the last decade by a crash in global oil and gas prices and an inability to get their product to international markets. Those dashed hopes have provided much of the fuel for the burgeoning Western separation movement, and today’s announcement that Encana is moving its head office out of that building and down to the United States certainly isn’t going to do anything to cool it down.

If anything, it gives Alberta’s provincial government, which just cut taxes for corporations like Encana, even more of an incentive to shift the blame for the decision in Ottawa’s direction. But as far as threats go, the one that Jason Kenney has made about holding a referendum on removing equalization from the Constitution if Justin Trudeau doesn’t make major progress on the Trans Mountain pipeline by 2021 is a head scratcher.

Justin Trudeau has, after all, already reaffirmed that his government intends to get TMX built, and trying to rush energy infrastructure projects through the regulatory and legal process has already blown up in Jason Kenney’s face when he was a federal minister. It’s also curious because Alberta cannot, on its own, compel the rest of the country to remove equalization from the Constitution any more than it can compel the Toronto Maple Leafs to give all their best players to the Calgary Flames.

But perhaps the most puzzling part of Jason Kenney’s proposed referendum on equalization is how little its success would actually benefit Alberta. As University of Calgary economist (and unofficial equalization expert) Trevor Tombe has pointed out numerous times, there is no conceivable way in which the equalization program could be changed to directly benefit Alberta’s treasury. Even with the recent—and brutal—recession, Alberta remains the place with the highest incomes in Canada. It’s still one of the youngest, too, which means it receives less in CPP and OAS payouts than a province with an older population. “Overall, of the $27-billion net outflows in 2015, roughly $19-billion can be accounted for by good things (high income, young population, etc),” Tombe noted in a 2017 Globe and Mail piece.

Those incomes have come down since 2015, but they remain the highest in the country. Indeed, the Government of Alberta’s own website says that “families in Alberta typically enjoy a higher family income than other parts of Canada.” And while many of those incomes are driven by the oil and gas industry, removing non-renewable resource revenue from the formula would actually increase the amount of money that Quebec receives in equalization payments—thanks, ironically, to a change that was made in 2009 by the Harper conservative government that Jason Kenney served in as a senior cabinet minister. And if equalization were to be eliminated entirely, and the funds redistributed on a per-capita basis, that $27 billion gap between what Albertans sent the federal government in 2015 and what they received in services would only shrink to $25 billion.

If Albertans want to see their federal tax dollars stop sharing the same treasury with ones that fund Quebec’s equalization payments, they have two options: help Quebeckers earn more money, or start earning way less themselves. The latter is obviously a non-starter, and the former might be just as implausible. According to Tombe’s calculations, in order for Quebec to become a “have” province its economy would need to grow by 33 per cent or generate $20 billion more annually in non-renewable resource revenues (Alberta generated a total of $4.98 billion in 2017/2018). In fact, it’s far more likely that Quebec will take in more in equalization in the future, as the Parliamentary Budget Office forecasts that more of its comparatively older population moves into their retirement years—and sees their incomes drop accordingly.

Maybe all this focus on the technicalities around equalization misses the point, though. After all, in Alberta, it’s long since transcended its actual status as a mundane government program become the defining metaphor for the unfairness that many people feel is baked into the relationship between the province and the federal government. As such, efforts to respond to criticisms of it with facts or reason may be destined to fail.

So if explaining how equalization works won’t satisfy is critics, and eliminating it won’t solve the problems they’ve identified, what should the federal government do?  Here’s a deliberately mischievous suggestion: it could offer to return a portion of the GST collected in Alberta equivalent to any sales tax that it decides to implement, up to the full 5 per cent. A combined 10 per cent HST would solve literally all of Alberta’s deficit issues, and allow it to either cut other taxes or re-invest in infrastructure and program spending.

Yes, the federal government would lose the GST revenue that’s collected in Alberta, which was upwards of $5.6 billion in 2017. But it might gain some much-needed constitutional peace and harmony in the process, and put to rest the notion—one that now spans multiple generations—that Trudeau-lead federal governments are always out to put the screws to Alberta. If that’s too bitter a pill for some in Ottawa to swallow, they could tie the funds to climate-friendly infrastructure projects like the LRT expansions in Calgary and Edmonton that the Kenney government suddenly seems reluctant to commit to funding. Either way, it offers them a way out of this morass—one that we all seem to need more with each passing day.