The underrepresented aren't heard. And then they vote with a bang. 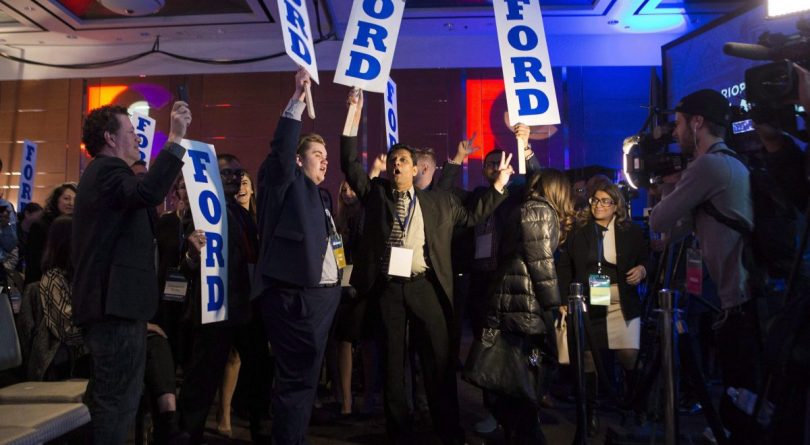 Doug Ford supporters rally during the delay in the Ontario PC Leadership announcement in Markham, Ont., on Saturday, March 10, 2018. THE CANADIAN PRESS/Chris Young

Mark Milke is author of A Nation of Serfs? How Canada’s Political Culture Corrupts Canadian Values

When some pundits, professors and politicians write or speak of populism, they often do so with a sneer and the assumption that populist voters are knuckle-dragging reactionaries with genetic stock firmly planted in the evolutionary Neanderthal period. You know the arguments and the attitude: a new politician cobbles together a coalition or platform defined by someone as populist and out come the rhetorical knives and eye-rolls.

Internationally, the politicians most associated with populism include Juan and Eva Peron in Argentina in the 1950s and 1970s, the American president Ronald Reagan in the 1980s, and the La Pen father-and-daughter National Front tag team in France over the last few decades. Many of the newer political parties in other European countries including European Union diktat-resisting parties in Hungary and Poland are categorized in such a manner. Populists include the left and right in Great Britain as represented by Jeremy Corbyn and the Brexit movement. As of 2015 in the United States, the list includes the rise of Bernie Sanders who almost upended Hillary Clinton in the Democratic party primaries and Donald Trump who did topple “his” party’s assumed favourites and then became president.

READ: Why Ontario keeps choosing between bad or worse leaders

In other words, the new populists are like the old populists: They act as divining rods and sometimes take power if established politicians ignore concerns on the ground.

Populism from “left” to “right” and beyond

The list of names should give us pause. They range from those who in economic terms might be labelled left-wing (Douglas, Corbyn and Sanders) or right-wing (Ronald Reagan, Mike Harris and Ralph Klein). Plenty of others defy such stereotypes. Economic pigeon-holes skip over, for example, cultural and social issues. But the latter more helpfully explain the rise of the new European parties, Brexit and Trump.

As with any new movement and the politicians and parties that later surf on populism to power, there is often no coherent or consistent program, economic or otherwise. There instead exists a mishmash of concerns that should be taken seriously—early, rather than, as is often the case, dismissed.

I’m not arguing that each of the above-named personalities is always correct on policy. But we should see populism for what it is: An expression of an under-represented or unheard chunk of the public.

As one example, today’s anxieties in Europe, the United States and Canada include whether new immigrants are successfully integrating into the norms of Western nations, such as the equality of women and the freedom to criticize others’ gods.

These concerns ought to be frankly discussed and addressed, not least because in a virtually connected world where people can retain their tribal identities and fail to integrate into the modern liberal democratic Western nation-state, such realities pose a threat to stable, functioning societies and to traditional Western freedoms—I can criticize your god and if you dislike it, you do not get to silence me via the law or even not-so-subtle shaming or threats.

That’s just one example where a so-called populist impulse (about immigration over time and integration) is a valid, non-xenophobic concern. I can think of other issues: The rise of identity politics, native Canadian and minority carve-outs in policy preferences, higher education and employment.

One reason why populism—average Canadians who buck elite preferences—surprises the self-referencing classes when a populist shows up at the top of a political party (Doug Ford and his Ontario PC leadership win) is because there are few ways for Canadians to adequately and regularly express their preferences.

I don’t mean every four or five years in an election. Elections are an obvious, necessary part of a liberal democracy but never enough to set complicated issues on the path to smart and workable remedies. That is because elections often turn on personalities (“Sunny ways and socks”– Justin Trudeau versus the dour Stephen Harper) and rarely on issues. One remedy is a greater use of referendums, including citizen-initiated versions just in case politicians and governments are resistant to chronic public irritations.

READ: Is Doug Ford’s position on cannabis sales an opportunity for the NDP?

But Canada’s political system is mostly devoid of such populist safety valves. That is unlike Europe and the United States where they are widespread and in many cases, required. (The Swiss have multiple referendums on often contentious issues ranging from minimum wage to abolishing the military and no one thinks they are less civilized for doing so.)  Referendums are helpful to honest debate and provide clearer results on what actually matters to the voting or protesting public.

The other reason populism in Canada is rarely spotted until it hits the top of a political party is because our parties routinely make it more and not less difficult to run against an incumbent or the leader’s favourite. For example, the party leader is usually the one to sign off on a candidate’s nomination papers. (Patrick Brown practiced this top-down approach in spades before he was toppled and chased out of the Ontario PC party.) This allows incumbents and existing party favourites to more easily shield themselves from challenges that may result from a populist wave. That further delays addressing core concerns.

In addition, through gag laws on free expression, governments across Canada thwart populist sentiment that might arise come from citizen’s groups—so-called “third parties” in the lead-up to and during elections. Such gag laws are yet another sign the chattering classes and those with political power don’t want their carefully-planned writ periods disturbed by voters who might actually care to discuss and promote idea debates, and not personalities.

The snobby reaction is blinding to understanding

Back to Ford: Is he tapping into something? Yes. Do people know in detail what his policies are? Not yet. But Ford is obviously signalling at least some Ontarians’ angst on power bills, parental rights on educational matters and the general annoyance with the Wynne government’s pay-the-debt forward approach to everyone’s great-grandchildren’s finances.

Which is to say this: Here’s another way to look at populism: As reflective of democratic urges that are often ignored by those currently in power, and thus often entirely legitimate. In fact, that’s the Oxford definition of populism: “A political approach that strives to appeal to ordinary people who feel that their concerns are disregarded by established elite groups.”

For those ensconced in the safe space of an ivory tower, newsroom or political office, it might help to get out a bit more –and listen to people very unlike you.

And some advice: After you do that, don’t follow it up with a snide lecture.