Justin Bourque killed three RCMP constables in Moncton in 2014—and with the national police force now on trial, a key point is being missed 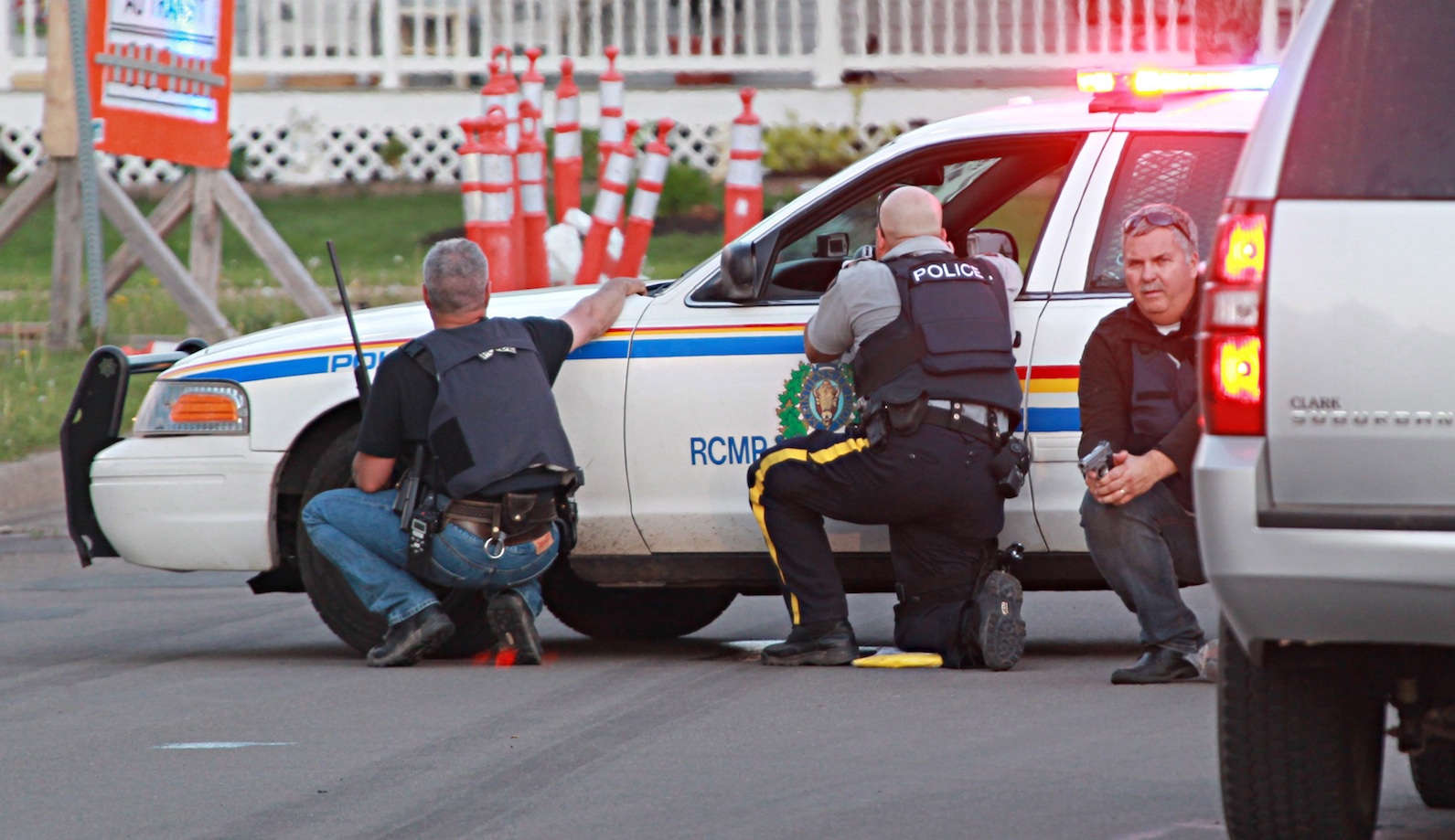 On Jun. 4, 2014, Constables Doug Larche, Fabrice Gevaudan and Dave Ross were killed, and Constables Eric Dubois and Darlene Goguen were wounded, in a series of one-sided battles against Justin Bourque in Moncton. Coverage of the fighting focused on the fact that Bourque was armed with two “long guns”—a .308-calibre semi-automatic rifle and 12-gauge shotgun—while the police had only pistols. The newly acquired C-8 carbine was not available. The argument is that better weapons and protective equipment could have changed the outcome.

Now, the RCMP is facing charges from Employment and Social Development Canada over allegations that the national police force “failed to provide members and supervisors with the appropriate information, instruction and training in an active shooter event, and also didn’t give members the appropriate equipment.” Testimony by now-retired RCMP Commissioner Bob Paulson asserted that officers were “reasonably trained” for such an incident and that the “C-8 carbine rollout was reasonable.” Prosecutor Paul Adams, however, called Paulson’s testimony “virtually incomprehensible.” There is obviously a wide gulf between the two positions.

But far less attention, if any, has been focused on at least one equally important fact: that this was exactly the type of fight that Bourque expected.

While combat is intertwined with a lot of mythology about the micro-details, general concepts contain truths that should form the foundational doctrine that guides operations. More than 20 years as a military doctrine developer has taught me that there are three aspects to a successful operation: equipment, people and tactics—and that the last one is the most important. And ultimately, the Bourque effort wasn’t so much a failure of equipment, but of tactics—how they were used and deployed based on the situation.

First, we should look at the three things that govern the effectiveness of any given gun: the weight of the projectile, its velocity, and the rate of fire. Weapons come in a wide range of types and purposes. A heavy, high-speed round kills with accuracy at great range, out to 3,000 metres. Light, low-speed rounds seldom kill and are inaccurate beyond a short range, around 30 to 50 metres. High rates of fire can be achieved from both types of weapons, but are effective for very different purposes; the light round suppresses enemy movement and allows for freedom of action, while the heavy round destroys structures and forces enemy movement.

The idea the RCMP brought the wrong weapon to the fight is a multifaceted issue. After all, the aggressor attacks and makes choices about the time, place and methodology, while the defender reacts, equipped at they are, because the attacker has set the conditions of the battle. The attacker in this case had the tactical advantage of knowing the police would be equipped only with small-calibre weapons, and so chose his fight with that in mind, using his rifle’s range and penetrating power to great advantage. Photographs showed officers taking shelter behind their patrol cars with pistols drawn, realizing too late that it afforded them no protection.

What is more important than the weapon itself is a trio of conditions that govern the effectiveness of any shooter: training, experience and state of mind. Unfamiliarity with a weapon can make the user inaccurate. Inexperience can negate the advantage of a superior weapon. Panic can render a shooter totally vulnerable. Frequently, calm gunners can shoot and kill with an inferior weapon when nervous ones cannot even fire a shot from a superior one.

Reports from the Moncton incident show that the constables were confused, and some became terrified when wounded. Meanwhile, Bourque was completely calm and an efficient killer. While the police were very familiar with their equipment and the former commissioner says they were reasonably trained, their states of mind were not up to the situation. It is likely they eventually felt it was hopeless because they could not react effectively against their assailant. A tactical withdrawal was apparently not an option. The killing only stopped when Bourque walked away.

Three issues around tactics govern the outcome of a gun fight: surprise, situational awareness, and numbers. Any battle that has an element of surprise will almost always have a one-sided outcome. If the aggressor knows the surroundings and sets the stage for the fight well, it will also end unevenly. In any fight, numbers count more than anything, unless the first two circumstances in this paragraph come into effect. This is why the side with the inferior numbers, and quite often the inferior weapons and training as well, try to achieve surprise in a setting of their choosing.

On this, Bourque had the tactical advantage. He was counting on the “serve and protect” culture of the police and their standard response of rushing in with sirens wailing. The police did exactly as he predicted; despite knowing that Bourque was acting alone and having reports from observers that he was heavily armed, the RCMP sent in a succession of lightly armed officers in patrol cars, resulting in the RCMP fighting a series of one-on-one engagements when they actually had a significant overall numerical advantage. This was a losing proposition for the RCMP, and a major error.

The public may expect immediate reaction to threats from the police; police doctrine is mutually reinforcing on this point. But to change the outcome of the situation, more circumspection and situational awareness was needed by police. Despite the instinct to rush in and protect, holding back and sending in an aerial drone to get a better understanding of the threat would have been a better first response. In fact, drones for reconnaissance are probably the force’s most urgently needed technology, rather than carbines for fighting.

While good weapons and equipment are important, they are not panaceas. Gunfighting, like seafighting and airfighting, is a combination of art and science. Training and technology do not dictate the outcome of all combats; risk will always be a factor when violence occurs. But better weaponry and protective equipment for the police cannot fully make up for bad tactics. On this day in 2014, the RCMP suffered from three fundamental tactical shortcomings: they were surprised by their opponent, did not understand the situation they found themselves in, and could not marshal their forces appropriately to exploit their numerical advantage. If these circumstances occur again, without major revision to police tactics, the outcome is almost certain to be remarkably similar to the debacle in Moncton, regardless of what equipment they may have.