The 2018 U.S. midterms will be historic—and probably predictable

Opinion: The midterm elections aren't to be taken lightly, yet Americans often think their job is done after the presidential vote—leading to consistent losses by sitting presidents 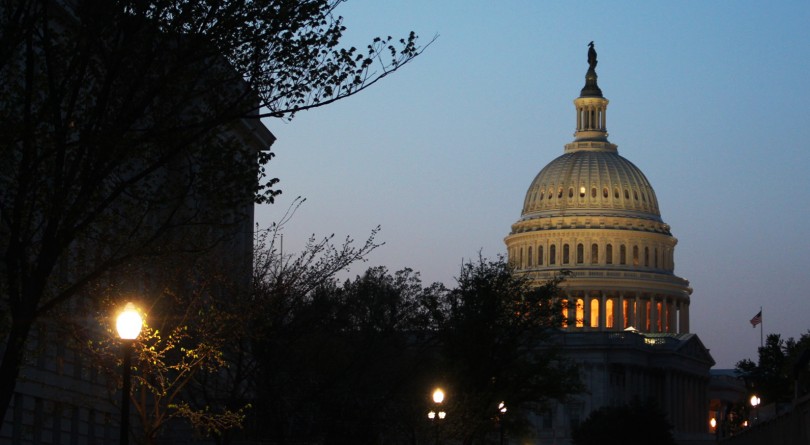 The U.S. Capitol in Washington, D.C. (Photo by Adrian Lee)

For once, pundits across the political spectrum agree: When it comes to Nov. 6’s American midterm elections, the stakes are high. Reuters suggests a Democratic win could spook the market; the Financial Post’s Lawrence Solomon predicts a blue wave might sink NAFTA 2.0 again; Vox says it could influence politics for years to come; Mother Jones, a left-leaning American magazine, has gone so far as to devote the entire November issue to what its cover calls “The Most Important Election of Our Lives.”

That might surprise those who see the midterms as lower-impact second-tier elections, ones that fail to attract as much media and voter attention as the high-profile presidential contests. Still, most generally know that they happen halfway through a sitting president’s term in office and are, therefore, considered a referendum on his job performance, and many have probably heard that the president’s party usually takes a hit and loses some seats in Congress.

But even as the media trumpets its historic quality—because in a moment in which the U.S. president causes the world stage to teeter with every passing day and tweet, everything feels particularly important—the reality is that a potential wave that would flip the House and put the reins on the Donald Trump’s power would actually be entirely expected.

In fact, presidents have gained seats during the midterms only three times in the last 100 years. Moreover, a closer look at the number of seats the president’s party has lost over the last 25 elections reveals that 16 midterm elections—nearly two-thirds of them—were “wave” elections, where wave is defined as an election in which 20 or more seats change hands. If the midterms can be considered a referendum on the President, then history shows that Americans sure experience a lot of buyers’ remorse. And after every major wave, there’s a lesson to be learned that appears to be continually forgotten: a voter’s job is never truly done.

LONGREAD: One side of this road is Republican, the other Democrat. Now it’s a battle line.

It was just eight years ago—in 2010, midway through Barack Obama’s first term in office—that one of the largest midterm waves in history struck, costing the Democrats 63 seats in the House of Representatives and six more in the Senate. This bloodbath, the worst since the Great Depression, came only two years after the nation celebrated making history with the election of the first African-American to the highest office in the land on his promises of hope and change.

There were a number of issues at stake in 2010: immigration, healthcare and the economy, which remained stagnant two years after the 2008 crash. But the biggest problem the Democrats had was turnout. Over 130 million Americans voted in the 2008 presidential election—70 million of them for Obama—but two years later, only 82.5 million turned up for the midterms. They largely weren’t the same ones who had put Obama in office: instead, many of the people who voted in the midterms had been mobilized by the Tea Party, a newly formed conservative organization affiliated with the Koch brothers-funded Americans for Prosperity (AFP) and the libertarian FreedomWorks organization. Although taxes were the Tea Party’s main platform issue, there were a number of issues on Obama’s agenda that the AFP wanted to shut down, notably public health care and environmental regulations.

The Guardian noted in its post-election analysis that a breakdown of the demographics showed that voters in 2010 had been “considerably whiter” than those in 2008 and, perhaps even more importantly, much older. Younger voters were down 11 per cent; seniors represented nearly a quarter of the 82.5 million people who voted. Obama’s supporters had helped make history, alright—but they’d also made a huge mistake in thinking their job was done when they cast their ballot for president. Since the stakes appear lower for midterm elections, the people who had put him into office neglected supporting his agenda two years later.

That void allowed the Tea Party to flip the House in a massive red wave, and emboldened the coalition of right-wingers that included Ted Cruz, Rand Paul, Michelle Bachmann and Mike Pence to maintain their broad alliances and stay the course. The turnout in the 2014 midterms was even worse—both in terms of overall numbers and younger, progressive voters—and the Democrats lost the Senate. The legacy of those two midterms are very much with us today.

Midterm voting turnout wasn’t always this low. It was higher in the 1950s and 1960s, and at certain points in the 1800s, midterms even attracted more voters than presidential elections. Some of this is owing to the fact that, until about 100 years ago, local politics often seemed more important than national issues, but also to the fact that American presidents didn’t have the kind of star power they have now. But it’s hard to draw too many conclusion about turnouts from the 19th century, given the number of people excluded from the franchise by virtue of their ethnicity and/or gender.

Voter turnout began to decline at the turn of the 20th century, with midterm participation hitting an all-time low of 32.9 per cent in 1926. That year, Calvin Coolidge’s Republicans lost nine seats, but kept control of Congress. Still, the next four years got pretty dark. Prohibition was still dominating the national discourse and the administration refused to hear any arguments about amending the law, even though it was resulting in epidemic poisonings from denatured industrial alcohol disguised as legit whisky, large-scale incarceration, and Ku Klux Klan terror campaigns against Jewish and Italian citizens. It also gave rise to concerns that an entire generation was being raised to see hypocrisy as a way of life, given the many “upstanding” members of society who openly flouted the law. In 1929, this hypocrisy moved Pauline Sabin, a wealthy and influential conservative, to quit the Republican Party and wage a campaign against the current administration by founding the Women’s Organization for National Prohibition Reform.

Later that year, of course, troubles worsened, when the stock market crashed and brought on the Great Depression. It was hard to blame Herbert Hoover for that—two previous Republican administrations probably did most of the damage—but he failed to take it seriously or help distressed people, downplaying the downturn and claiming things were picking up when they clearly weren’t. Plus, he implemented the controversial Smoot-Hawley tariffs on some 20,000 imported goods, which some experts believe made the economy worse.

Add to all this an October surprise in the form of a five-part exposé written by the “Man in the Green Hat,” a bootlegger who had been selling Congress all its illicit liquor but decided it was time to reveal the secret wet lives of all the “dry” lawmakers, and the 1930 blue wave became one for the history books. Turnout rose four per cent, and the Democrats picked up nearly 60 seats.

READ MORE: What we can learn from Smoot-Hawley, a disastrous U.S. tariff on Canadian goods

This not only flipped the House, it also laid the groundwork for the first of Franklin Delano Roosevelt’s four presidential terms in 1932. When his performance was evaluated by the people two years after that, the Democrats actually picked up 18 more seats, making him the first of four presidents not to lose seats in the midterms.

JFK broke even in 1962—an election marked by 47.7 per cent turnout, the second-highest in the past 25 elections. The next president not to fail the test was Bill Clinton, in his second term; his party made slight gains during the 1998 midterms, despite the fact that Newt Gingrich—who The Atlantic dubbed “the man who broke politics”—brought up Monica Lewinsky’s name at every possible opportunity. Four years later, in 2002, George W. Bush’s Republicans also beat the odds by winning a few seats in Congress, a signal that Americans approved of how he handled the 9/11 terror attacks 14 months earlier. Four years later, though, with the younger Bush’s approval ratings tanking, a blue wave swept in, making Nancy Pelosi the first female Speaker of the House. She would go on, of course, to become a major target for both Newt Gingrich and the Tea Party.

Again, history tells us that midterm waves aren’t at all unusual—they’re practically the norm. And the stakes, as Mother Jones itself states, are actually always high. But Americans often don’t vote as if that’s true, since many seem to think they can call it a wrap immediately after they’ve cast their ballot for president.

But there’s always somebody who doesn’t go to the party and, instead, gets up the very next day to start working toward a wave, and if they manage to get enough people out to the midterms, that legacy can be powerful enough to affect the commanders-in-chief’s. If all the reversals of fortune, wave elections, backlashes and midterm regrets teach Americans anything, it should be that their job as voters is never really over.

And that will be true after this all-important midterm, too—blue wave or not.