Why the Liberals can't stop talking about abortion

Andrew MacDougall: An election looms and the Liberals are rallying around abortion. It's a sure sign that something has gone badly wrong. 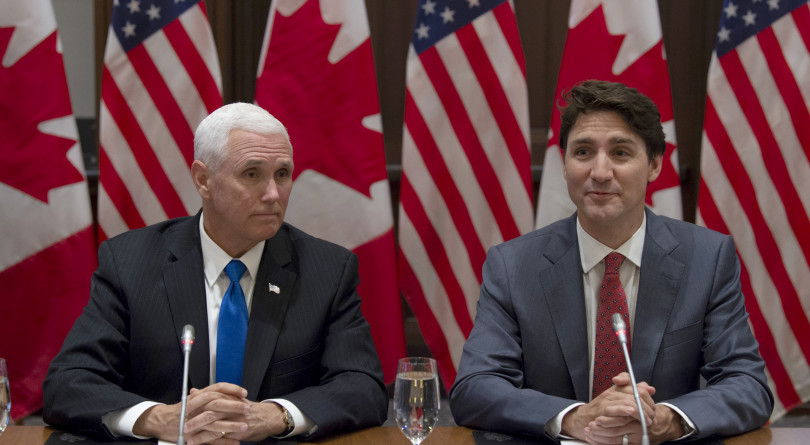 Trudeau and Pence wait for the Canadian Council for the USMCA meeting to begin on Parliament Hill on May 30, 2019. (Adrian Wyld/CP)

No, that wasn’t the actual script of this week’s motion in the House of Commons affirming support for abortion, but it accurately sums up the reaction to it from the Liberal benches. These days it seems like nothing puts a bigger smile on Liberal faces than the prospect of talking about abortion.

If the debate in Canada is about a new threat to abortion, the Liberals think they’re in with a shot. To wit, Justin Trudeau—with the NAFTA renegotiation still in the balance and two Canadians locked up in Chinese jails, pawns in the U.S.-China dispute—chose to spend some of his precious time with U.S. Vice-President Mike Pence warning him about the “backsliding” on reproductive rights on his patch.

In case you missed it, Pence is against abortion. Decidedly so. Not that anything Trudeau has to say about supporting the need for more of it will move: a) Pence’s opinion; or b) American jurisprudence.

Not that it matters; the Liberal play on abortion is 100 per cent domestic. Slapping at the vice-president should also please the clap-happy backbench. But if you had told the Liberals at Christmas that cheering for abortion is how they’d be preparing for the upcoming federal election they would probably have guessed that something had gone wrong.

Because politics is a punchbowl of karma, this week also saw SNC-Lavalin—the said something gone badly wrong—return, with a federal judge deciding the Montreal-based company will indeed go to trial on corruption charges.

It needn’t be an SNC; the threshold for talking about the threat to abortion is now incredibly low. At this point, the town drunk in a one-stoplight town in rural Western Australia could tweet his opposition to abortion and Trudeau would ring up Scott Morrison, the Aussie prime minister, and dress him down for not keeping his citizens in line on the subject of more dead babies.

Of course, Trudeau isn’t talking about dead babies. No politician ever would. Trudeau is talking about the right to an abortion. And while “dead babies” is a provocative way to frame abortion, “reproductive rights” is its anodyne counterpart. Neither term captures the nuance of the debate.

And there is nuance. It seems to be lost on the Liberals that someone can be pro-choice without being militantly so. That’s where I—and I imagine a lot of Canadians—slot themselves on this vexed question. Or that someone, for that matter, can be pro-life and not be a character in a Margaret Atwood novel.

For many Canadians, the taking of a life—and that’s what abortion is—is tragic. They don’t want people who are raped to carry an unwanted child into this world, but nor do they think it’s right that a woman can choose an abortion “regardless of the reason,” to use the words of the recent House motion.

And if you think that’s not progressive enough, how about the case of sex-selective abortion, a practice that’s not uncommon in some cultures? Or the termination of a foetus with Down’s Syndrome? These are hardly black and white questions. Nor should they be political footballs. Or a wedge into Canadian society.

So stop it, Justin Trudeau. Canadians deserve better than these desperate and pathetically obvious stunts. You are practicing the very fear and division that you railed against so eloquently to win in 2015. It’s time to think up a new approach.

Because the current path is destined for failure. Canadians are smart enough to know the “hidden agenda” doesn’t exist and that, even if a backbench MP does introduce a bill, it will either be smothered by the leadership or easily voted down by MPs in the House of Commons, the vast majority of whom have zero desire to revisit the issue, no matter how many gaps there are in Canadian law.

If Trudeau wants to secure women’s rights, why doesn’t he pass some legislation doing so, or tuck a plan into his next platform? It would certainly be a better use of the government’s time than having Maryam Monsef moan about the 12 Conservative MPs who show up to the annual pro-life rally on Parliament Hill (or as I like to think it, 158 MPs short of a majority).

And while I would prefer that MPs who are wholly animated by the single issue of abortion didn’t run under the banner of a party that has no interest in reopening the debate, I’m not willing to ascribe a nasty motive to their anti-abortion beliefs, or pretend that it portends the apocalypse.

As Trudeau once said:

“I find the notion that one’s race, religion, gender, or sexual orientation would make anyone in any way superior or inferior to anyone else absolutely repugnant. And if there’s anyone who disagrees with that, there’s the door. You are not welcome here.”

Oh wait. That was Scheer. This week. Some monster.