Why Trump's handling of the Jamal Khashoggi murder is so dangerous 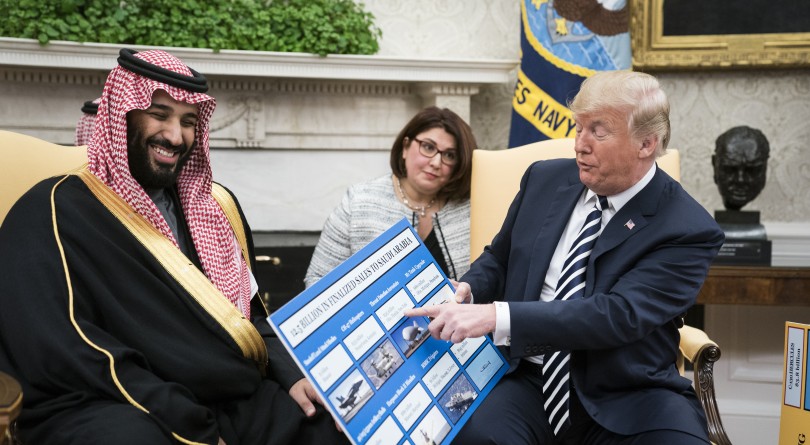 Donald Trump shows off posters as he talks with Crown Prince Mohammed bin Salman in the Oval Office at the White House on Tuesday, March 20, 2018 (Jabin Botsford/The Washington Post via Getty Images)

It was another week in which Donald Trump proved he has little capacity to see the world in anything but black and white. The most shocking moment, arguably of his entire presidency, was on Nov. 20 when the White House released a statement in which the putative leader of the free world basically gave the stamp of approval to a politically-motivated murder of a journalist on the grounds that money matters more.

For Trump, the sentiment should come as no surprise. But what’s most disconcerting about this particular instance is the repercussions it has for the world. Jamal Khashoggi’s death at the hands of a Saudi hit squad in Istanbul was—now also according to the CIA—most likely ordered by Saudi Arabia’s de facto leader, Crown Prince Mohammed bin Salman. Trump’s response: So what?

We can shake our heads and call it stupidity; it’s no secret that Trump lacks the intellectual rigour most U.S. presidents have possessed. But to say he is dumb misses the point. It isn’t a lack of intelligence that’s behind this latest act of madness.

In fact, there actually are smart people who think Trump has made the right decision. Their arguments echo Trump’s, though with more finesse. The problem, they say, is Iran. This raging bogeyman of the American right seems to be the only threat to the world order, and anything the U.S. does to confront it, even excusing murder, is acceptable.

But there is a fundamental flaw with this argument. It rests on the assumption that a country like Saudi Arabia offers the best partner for bringing some semblance of calm to the Middle East. It banks on the fact that the House of Saud, over more than seven decades in power, has been a reliable partner for the U.S.

READ MORE: Why is Saudi Arabia still getting Canadian-made weapons?

If history is any guide, however, none of that will last. The Saudi regime is in crisis. Its future is uncertain and amid that uncertainty, its rulers have turned to a despot to salvage it from collapse. He, in turn, has tightened his grip on power and demonstrated his obsession with guaranteeing the survival of the monarchy at all costs.

But the American administration seems blind to these basic facts. The truth of it is that they see the Saudis as an easier regime to deal with than the Iranians, or even Turkey, for that matter, which has pushed hard to expose Salman’s involvement in Khashoggi’s murder. Saudi Arabia is reliable  because it is an absolute monarchy. And it is now controlled by one of the most totalitarian leaders the monarchy has ever seen.

Iran is more complicated. It’s president, Hassan Rouhani, occupies a tenuous position, locked in a perpetual battle between religious conservatives and moderates that has raged at least since the 1979 Iranian revolution, if not earlier. At times, the moderates have gained the upper hand only to be violently subdued by the conservatives. At other times, the Ayatollah has had to concede powers to the moderates.

Turkey is even more complicated. We can criticize its President, Recep Tayyip Erdogan and his AK Party for playing at elections with loaded dice but the fact is the democratic process is not entirely subject to his personal whims. Over the past decade, he has seen his support wane. In the spring 2015 general election, he watched helplessly as the AK Party lost its parliamentary majority. In response, Erdogan played all his political cards, ratcheting up his authoritarian tendencies. But Erdogan operates in a quasi-democratic environment where public opinion matters.

So does, to a lesser extent, Iran, which itself operates somewhere between democracy and theocracy where government policy is subject to contentious debate.

Muhammad bin Salman is a different breed of politician, operating in a unique political environment. It would be a stretch, in fact, to call him a politician at all, just as it’s a stretch to say Saudi Arabia has a political system in the modern sense. It has an all-powerful family playing at politics but in practice running a massive Ponzi scheme centred around oil.

In the short term, it may be simpler to deal with a regime like Saudi Arabia, but the costs are merely deferred to a later date. And there will be costs. The upheavals in the Middle East today are intimately tied to a mounting desire for democratic freedoms among Arab populations. They are sick of despots like Salman and Egypt’s Abdel Fattah el-Sisi. Partnering with them, as Trump has done, is not only short-sighted, it is blind to the basic dynamics of Middle East instability.

But Trump likes his totalitarians. They fit nicely into his simple understanding of how the world works. In a totalitarian state, there is no pesky opposition to worry about, no dissenting voices complicating the issues. Trump’s style of doing business—more mafia than mediation— works best when the partners are Kingpins.

It also works best in a world where rules no longer matter. And that is the world Trump is trying to create. At its core, Khashoggi’s murder was a demonstration of how little Salman cares for a rules-based world order. And by backing him, Trump has removed one more obstacle to the rein of despots.