A closer look at the federal government's new international assistance program, now oriented with women at its centre 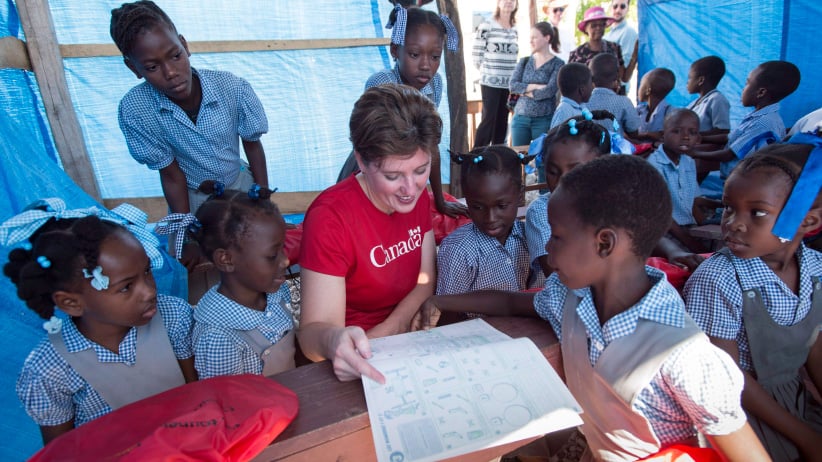 As we near the end of a tough parliamentary session which included a six-week marathon filibuster at the House of Commons procedure committee and an escalation in jabs and the general hostility of question period, rumblings of a new, explicitly feminist development assistance agenda seemed too good to be true for many women’s advocates. But for a federal government that has declared itself actively feminist, is re-investing in equality-seeking women’s organizations here at home, and is changing how it does public policy-making, the unlikely appears to have become reality.

Spearheaded by International Development Minister Marie-Claude Bibeau, after months of consultation with leading development groups around the world, the government announced a bold agenda last Friday, the main feature of which is a newly oriented international assistance program with women at its centre. A human rights approach will now be closely applied in determining where Canada directs its assistance funds; gender equality, environment and climate action, inclusive governance, and peace and security are four of the six priority areas where funds will be deployed.

There is no doubt that Minister Bibeau is simultaneously the beneficiary and agent of a renewed feminist zeitgeist within the federal government. Whether it’s a brand or a belief—or both—it’s obvious that it’s taking the federal government in all kinds of new directions, some of which have been long-awaited. But whether Canada, along with a small group of other countries, can shift the tide in significantly amplifying women’s leadership and empowerment the world over remains to be seen.

An auspicious sign as part of this new orientation in international assistance is the establishment of the Women’s Voice and Leadership Program, which will provide $150 million over five years to organizations across the developing world that actively promote the equality of girls and women, often under very difficult conditions. This fund is one of very few in the world, the first having been established by the Dutch government a decade ago. The fund’s aim is to provide much-needed stability and support to women-led groups that are strategically working to increase women’s civic engagement and influence, often amid much hostility, civil unrest, or downright political violence. In a world where only 14 women lead national governments around the globe—making up less than seven per cent of the world’s leaders—there’s no question that progress is lacking.

Few countries currently invest in these efforts because they fear either a domestic or diplomatic backlash, or because the governments that are in a position to fund these groups are out of step with the feminist underpinnings of this advocacy. Up until now, Canada has periodically found itself in this company, but not always. The previous government led an ambitious international strategy on maternal and child health but drew the line at reproductive choice, something many international groups regard as essential to women’s empowerment. Structurally, however, Canada’s international development assistance has rarely reached women-led organizations, regardless of the government in power.  International aid has typically been given directly to fledgling governments or to very large non-governmental aid groups that have few relationships with grassroots community-based efforts.

But Minster Bibeau’s announcement suggests that the Trudeau government is repositioning Canada’s place in the world, with a plan to balance its increased spending on defence with investments in “soft power” aimed at accelerating women’s civic and political engagement in the name of more gender balance, among other things.  This explicit support for inclusive governance means that, through its international assistance, Canada will find ways to encourage and equip more women to become part of the formal power structures in ways that have largely left most women on the sidelines in the world’s poorest or most conflict-ridden countries. It’s likely among the boldest, and most feminist, of investments Canada can make.

Equal Voice, a multi-partisan organization dedicated to the election of more women in Canada, has seen the power of this civic engagement firsthand.  In 2016, we provided the political training required for a women’s capacity-building project in Morocco that was undertaken by the International Republican Institute. Through the creation of a non-partisan Women’s Support Network, a group of women were equipped in a “train the trainer” model that’s designed to encourage other women to learn about politics and get involved in public life. Since its inception, more than 60 women leaders have completed the program thus far, many of whom are pursuing roles within the formal political process in a country with only 20 per cent elected women.

And while Canada’s own international rank of 62nd in the world for women in elected office according to the Inter-Parliamentary Union is hardly impressive—just 27 per cent of Canada’s MPs are women—Trudeau’s commitment to a gender-balanced cabinet, and his own declaration that he is a feminist, highly unusual for a male leader, remains a radical act in the eyes of the global community.  It’s given Canada the credibility to pursue an explicitly feminist agenda when it comes to backing women’s organizations that have often been on the margins of development assistance.  Equally as crucial, Trudeau’s gender-balanced cabinet has likely created the conditions for Bibeau to garner key support among her cabinet colleagues to move Canada in a direction where the words “feminist” and “development assistance” can be used in the same sentence.

However, Canada is not alone in directing its overall aid to advance the equality of girls and women. Australia, the Netherlands, Norway, Sweden and the United Kingdom have all identified equality as a core objective of its global aid. And for good reason: Ensuring development assistance reaches girls and women means that hard-won taxpayer dollars in the first world actually reach grassroots organizations in the global south that are well-positioned to change a community’s fortunes.

Whether it’s providing equal educational opportunities for girls and boys, creating alternatives for women suffering from politically motivated or family violence, or ensuring women’s full engagement when it comes to improvements in agriculture, entrepreneurship, community and regional leadership, the reality is that having women at the table dramatically improves the chances of success over the long-term—success that can be sustained by the communities themselves. It’s money well spent.

President and CEO of CARE Canada Gillian Barth knows this well. Using research from the UN’s Food and Agriculture Organization, she asserted in a September 2016 piece for the Institute for the Research of Public Policy that “women could increase yields on their farms by 20 to 30 per cent if they had the same access as men did to resources for production, such as agricultural tools and services.” That means that increased productivity “could, in turn, raise total agricultural productivity in developing countries … and bring food security to an additional 100-150 million people.” In southern Syria, Barth reports that men are 71 per cent more likely to manage how relief items are distributed, as compared with fewer than 12 per cent of women—this, despite the well-known fact that there are far more female-led households now who are sustaining whole families, if not communities, owing to the disproportionate number of men involved in heavy fighting.

The Nobel Women’s Initiative, a network of six women Nobel peace laureates who actively support women’s human rights around the globe, has been watching closely as Canada seeks to reorient its international agenda. Rachel Vincent, the group’s director of advocacy and media, says that this “is a solid first step towards changing the way Canada delivers aid—from treating women as beneficiaries of aid to partners for change. Canada is showing the world that investing in women and gender equality is essential to bringing about peace and security—and that benefits everyone, including Canadians.”

But there is no doubt that groups like the Nobel Women’s Initiative, who are convinced of this approach, are eager for Canada to substantially increase overseas development assistance to what many consider the gold standard—0.7 per cent of the Gross National Income. Germany and the U.K. have reached this target already. “If Canada were to double its assistance budget to meet this standard and deploy those resources in the way that they have now outlined, there’s no question it would mean a sea change,” she says.

Why the federal government did not seize this opportunity to raise, even modestly, the level of development assistance is difficult to discern. Clearly, the 70 per cent increase in defence spending is taking up a large chunk of the pie. On the other hand, with just 0.3 per cent of Canada’s international assistance (or $1.7 million) reaching women in 2013, the resources available to women’s organizations would multiply to such a degree that it could radically change the outcomes for women, children and their communities, if this new approach to international assistance has the intended effect. This will be true even without another new dollar added.

The message in all of this? Investing in soft power has the potential to yield strong results. If women are properly resourced and recognized for the leaders they already are in their communities, they will generate the social and political capital to pursue and serve in formal positions of leadership in the public sphere.  Male-dominated power structures may finally evolve to be more inclusive, dynamic and reflective of the challenges and opportunities for women and their families. Relief can be brought to entrenched conflicts and new economic and social opportunities can be generated for far more people than in the past. Power sharing becomes more of a norm, not an anomaly.

But for this to happen, well-articulated feminist policy must translate into well-implemented feminist practice within and beyond Global Affairs, the federal department in charge of making this happen. If Minister Bibeau and her cabinet colleagues are indeed successful in creating the conditions for this kind of transformative, long-term systemic change on the global stage, the federal cabinet will have truly earned their feminist moniker. But only time and vigilance will tell the tale.

Nancy Peckford is the executive director of Equal Voice Canada.