Winter is coming to Canada's North. Vladimir Putin will make sure of it. 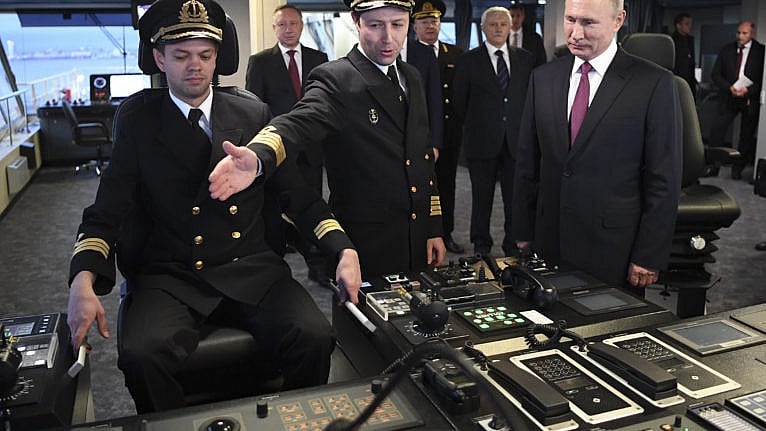 Putin, right, visiting the bridge of the newly built icebreaker Viktor Chernomyrdin in St. Petersburg, Russia, in November. Russia is rapidly expanding its fleet of icebreakers as it expands its reach in the Arctic. (Alexei Nikolsky, Sputnik, Kremlin Pool Photo via AP)

Marcus Kolga is the founder of DisinfoWatch.org and a senior fellow at the Macdonald-Laurier Institute and CDA Institute

Over the past few weeks, the Russian president’s ambitions have converged in the Arctic, challenging Canadian and allied interests and dropping the threat of conflict with the Kremlin directly on our northern shores. Russian Foreign Minister, Sergei Lavrov, recently warned Canada and other Western allies that all the resources beneath the melting ice in the Arctic Sea belong to the Russian government.

The Kremlin’s updated claim to what Canadian Arctic expert Ron Huebert defines as the “entire Arctic Ocean” would extend its undersea continental shelf right up to the 200-nautical mile exclusion zone around Canada’s Arctic coast. If approved by the UN, the claim would allow Russia to extract vast Arctic oil and other natural resources, adding to the revenues of Russian kleptocrats who keep Vladimir Putin in power.

The overtly hostile claim, made while the rest of the world remains focused on the global pandemic, represents a clear threat to Canada’s Arctic sovereignty and requires much greater government and public attention.

The dual hazard to Canada posed by Russia’s rapid Arctic militarization and expanding territorial claims can no longer be dismissed as “out of touch,” or as an “imaginary threat” concocted by Canadians intent on sparking an “Arctic Cold War.”

While Canadian policy-makers were distracted by the Kremlin’s rhetoric about Arctic cooperation, Vladimir Putin was busily preparing to exploit the vast opportunities that are being unlocked by the melting Arctic ice.

In its official 2035 Arctic strategy document, the Kremlin outlines plans for an aggressive expansion of Russian Arctic resource development and a focus on expanding its military capabilities. Coupled with Sergei Lavrov’s recent warning that “it has been absolutely clear for everyone for a long time that this [the Arctic] is our territory, this is our land,” Vladimir Putin has made his intentions very clear.

His Arctic ambitions first appeared in the late 2000s in the form of rapid militarization and the development of special weapons designed to secure its Arctic claims.

The Kremlin established an Arctic command in 2014 to re-organize its offensive and defensive military assets, including 14 new military airfields and 16 deep-water ports that have been built or restored in the country’s far North.

A swath of new Russian “super-weapons” such as the Poseidon 2M39 torpedo, have been designed to support Putin’s Arctic aspirations. The Poseidon is a stealthy, nuclear powered and autonomous long-range torpedo that can evade underwater detection under Arctic ice to deliver a thermonuclear warhead to coastal targets. It is clearly intended to augment Russia’s offensive military capabilities.

While some Canadian Arctic experts and policy-makers have consistently called for dialogue with Moscow on issues of common concern, it’s hard to identify which concerns Canada might share with Putin.

Advocates for Russian Indigenous communities, for example, face increasing political repression. Last year, the country’s justice department labelled a Moscow-based NGO, the Russian Association of Indigenous Peoples of the North, a “foreign agent” due to its links with Canadian Indigenous rights organizations, and forced it to close down. Its leader, Dmitry Berezhkov, is now living in exile in Norway after advocating for the protection of Indigenous Nenets territory from environmental degradation by Russian gas and oil giant Gazprom. According to the Russian environmental activist Yevgenia Chirikova, Gazprom’s NordStream2 pipeline has violated the rights of both the Nenets people and Indigenous Finno-Ugric tribes in Western Russia.

Canadian policy-makers must wake up to the reality that the Kremlin has no interest in slowing the effects of global warming or placing any constraints on the ability of Russian state companies and oligarchs to extract profits in the Arctic. While Canada rightfully prioritizes the environment and Indigenous affairs, Vladimir Putin does not. Instead, the Kremlin has prioritized the development of military technology designed to expand and secure its Arctic claims and to threaten those Arctic nations that challenge them.

Russian chess grandmaster and human rights activist Garry Kasparov told me that “Canadian policy-makers need to understand that Vladimir Putin is not interested in cooperating or protecting the environment or Indigenous rights in the Arctic. He will destroy them there, as he has destroyed them in Russia, if they are in the way of his profits, and he will not hesitate to threaten Canada either.” Canada, Kasparov warns, “can only protect its interests by standing up to Putin, not by appeasing him.”

To address the threat to our sovereignty and interests in the Arctic, Canada requires a coherent Arctic strategy that includes national defence, development and the economic prosperity of Northern communities. Canada’s recent commitment to modernize the NORAD early warning system is a welcome start. But much more is needed.

In addition to Canada’s only permanent Arctic defence station in Alert, a limited-capability naval refueling facility will be completed in 2022 at Nanisivik on Baffin Island. The facility is designed to support six new “Arctic and offshore” naval patrol ships, the first of which was launched in 2020. The ships have been touted as “a critical part of Canada’s answer to Arctic sovereignty.” Yet their Arctic capabilities are limited to operations in first-year ice, such as the kind that forms annually on Hudson Bay. As such, the existing civilian deep-water port in Churchill, Man. could be modernized and developed to establish a home port for Canada’s Arctic fleet.

Canada should also work with our Arctic allies to develop common defensive strategies through NATO and other supplemental defence arrangements like the U.K.’s Joint Expeditionary Force, which includes Sweden and Norway. Canada would benefit from establishing a NATO Centre of Excellence for Arctic Defence,  and from working with allies to pool military procurement for Arctic capable military hardware—including submarines.

Borrowing a phrase from the popular Game of Thrones TV series, Garry Kasparov often warns that “winter is coming” to describe the threat posed by Vladimir Putin. “Winter is coming” for Canada’s Arctic, too, if our policy-makers fail to recognize the growing threat of the Kremlin’s militarization and expansionism that now directly target Canadian interests and our Arctic coast.