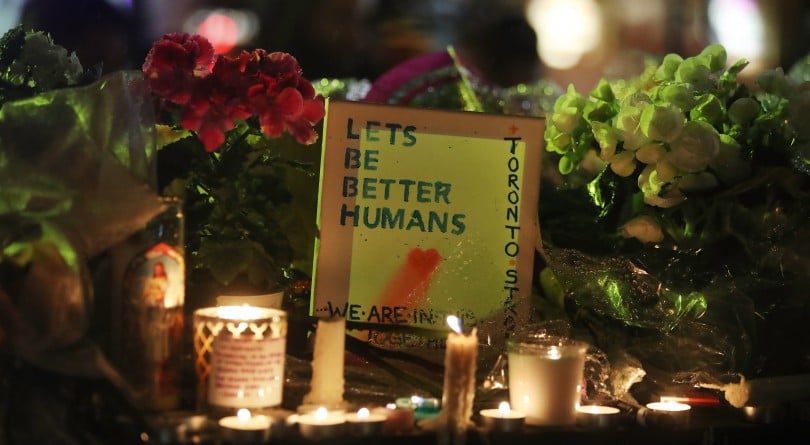 TORONTO, ON- APRIL 24 - "Lets be better humans" A candle light vigil is held at Olive Square near Yonge and Finch Streets for the 10 people that were killed and the 15 injured in the van attack along Yonge Street between Sheppard and Finch streets in Toronto. April 24, 2018. (Steve Russell/Toronto Star via Getty Images)

It is possible I only imagined the softer Toronto I thought I saw this week in the days after a man driving a van killed 10 people and injured at least 14 more—but I don’t think so.

Perhaps, like many of us in the city, he was feeling more aware than usual that having a good day can never be taken for granted, and it felt to me that he wanted to make some slight contact with the people who came his way. I know that I needed to feel contact, and in the dog park on Monday night, there was more conversation, held by people standing slightly closer together than usual.

Down in the subway, when I was off the bus, I saw a woman giving change to a man. This is not at all unusual here—the asking or the giving—but this woman was right down beside the man, her wallet wide open as she talked to him. Maybe she just does that. Maybe that’s just her way of giving out change, and for many people, giving out change is just a part of walking downtown. I only take transit when I am very rushed, my deal with myself being that if I walk and don’t buy a tea or anything, I can give out five bucks or so, which seems to me to be better for everyone involved. I know, of course, that it’s easy to give money to a human being the same way you shove a token into a turnstile so you can keep going, but there is meanness in that, or at the very least, it is ill-mannered. This woman’s seemingly unobtrusive kindness both stood out to me this week, and seemed in keeping with the city’s general mood.

As I was getting on the train, I noticed the other people trying to get on the subway actually let people get off the train first. This never happens. It’s just not a leap our civilization has made. Figuring out that you need to let people get off the train before you try and occupy the space currently filled by those people would be our equivalent of  discovering fire, but we’re not there yet. This week, though, I saw people do just that: step back a moment, and be less pushy, brusque and needy in general.

Toronto, while usually a pretty mild-mannered town, is not that thing that some people call “laid-back.” Laid-back is a state I don’t much care for in a city. I like being in a place where just about everyone is working, because I think that while most of us resist the idea—because it’s a lot of work—people are happiest when they’re working. Around town this week, people kept doing their jobs and we did not shut down, but there seemed to be a peculiar gentleness about it all. A city, after all, is a multi-celled organism made up of countless smaller parts, but ultimately indivisible. It was as though, if we were sweeter and a bit quiet perhaps, we could heal this.

We can’t. We can only try and help those most closely affected, and many people stepped up to try and do whatever they could.

Of course, this kind of calm, compassionate fortitude in the face of tragedy is not peculiar to Toronto. The world has seen so many cities carry on in an orderly way after attacks of various kinds at this point and much heroism in the face of them that it’s almost as if a template has been established for the news cycle beginning with “There are reports of…” and ending with “City bravely forges on… as only [City Name Here] can.”

What may be somewhat unusual and, indeed, delightful about Toronto is how many people here seem to be wary of the kind of civic exceptionalism heaped on a place in the wake of a horror like this. So many of us come from other places—about 50 per cent of the citizens of Toronto are immigrants to Canada—that suggesting this city is uniquely adept or, as some outsiders suggested, uniquely unprepared to handle an attack, both feel a bit silly.

The truth is, Toronto responded to the events this week as nearly all people respond to trauma and loss the world over and have throughout history. The notes of condolence amid the piles of flowers and candles at the makeshift memorial on Yonge Street are written in so many languages as to be written in one. Paradoxically, that this so much bigger than Toronto, and not really about Toronto, is so Toronto—being as it is, the world in a nutshell.

On my way back from my meeting the day after the attack, crossing Bloor Street at Yonge, I saw an elderly gentleman fall, and it seemed as if half the city rushed forward to help him. People watched as he was helped up, and then they kept watching as the man walking with him carefully took his friend’s hand and the two of them continued crossing. We watched as if there were some chance the entire intersection might be needed in this crossing, and we all wanted to be there, just in case.

It feels as if this is a place on high alert for kindness, on the lookout for opportunities to be human together.