With its high-stakes first budget, the B.C. NDP achieves a rare balance

Opinion: With a precarious grip on power, the B.C. NDP puts forth a progressive yet surprisingly palatable budget 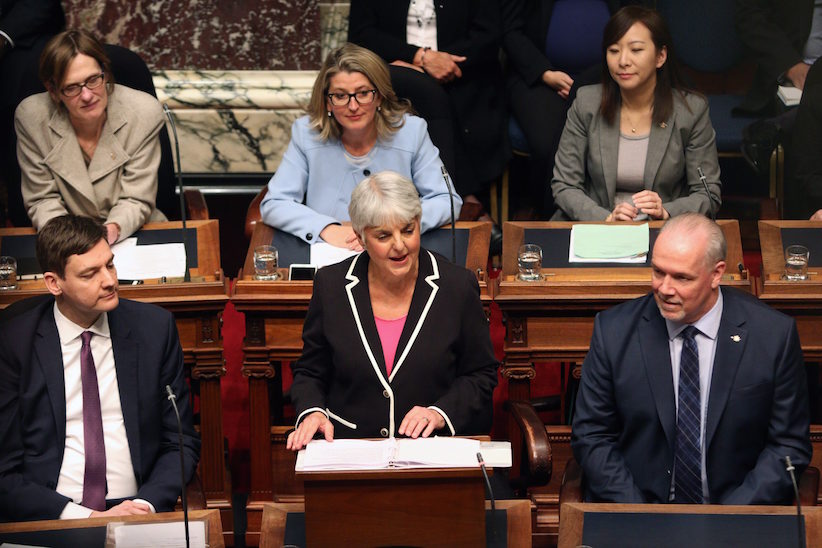 At some point in the last 60 years, it became unfashionable for the left to use the word “socialist.” Sometime after that, it was downright forbidden, as if by some tacit agreement even those on the left decided that lest they scare everyone off, they’d keep their ideology to themselves, thank you very much. New Democratic parties around the country and federally started drifting towards the centre, tempted by the siren song of the centrist vote; they often found themselves dashed against the rocks, though, as cautious voters went with devils they knew, but they’d pick themselves up and float right back to where they came from.

Against that backdrop, the B.C. NDP’s budget stands out, even if modestly. It was the party’s first full budget after forming government last spring, and to no one’s surprise, the watchword of the day was “affordability,” the same central commitment that helped the orange side replace the slumping Liberal Party. But to somewhat more of a surprise, the plan is more aggressive than expected. For their first budget since the years when the Talking Heads were still touring, and in the context of suspicion of the left and a precarious legislature, James and her New Democrats have done a remarkable thing: they’ve managed a progressive and popular budget, one that’s more or less balanced, and begins to deliver on some of the affordability promises from the election.

Indeed, the B.C. New Democrats—few, if any, of whom would dare use the word “socialist”—have introduced a progressive affordability budget replete with social spending, but dressed in enough centrist hedging to be palatable to many and, perhaps more importantly, to improve the party’s chances at not just remaining in (precarious) power for now, but maintaining power through the next election—maybe even, next time, with a majority. This is a budget for the long run, both fiscally and politically: progressive, but not the kind your uncle will be too scared of, but seemingly building toward something more systematic, more ambitious, and qualitatively different than the tepid centrist tinkering of past governments from across the spectrum.

The province’s books are forecast as in surplus, though just so—ranging from $151 million this year to $284 million three years from now on a budget of $54 billion—and partly contingent on how much money the Insurance Corporation of British Columbia (ICBC, which was recently tagged by the province’s attorney general as a “dumpster fire”) loses. That leaves very little room for costly surprises, but it’s enough of a buffer to forestall a serious deficit. And it wouldn’t exactly be unprecedented for that number to increase. The (effectively) balanced books are enough to signal just-enough-prudence-for-now (that is, until ICBC’s affairs are set right) and to ensure that today’s spending remains likely affordable tomorrow.

Long-term planning makes sense, especially if you’ve been glowering across the aisle from the opposition benches for years. Despite a growing economy and a balanced budget, the Liberals failed to form government after the 2017 election, in part because of their intransigence in the face of evidence that, if unmoored from the day-to-day realities of those who live under them, economic fundamentals are effectively meaningless to voters. If the economy is growing but no one can afford to send their kids to daycare or to make rent, then folks will push back—and if the economy isn’t working for them, they’ll find someone who can do better. The Liberals ignored affordability issues for years and failed on social spending time and time again. Voters found the NDP who, in this budget, released $5.2 billion in new social spending as a first turn-of-the-wheel in setting the ship of state on a new course.

The New Democrats spent $1 billion on child care, eliminating the cost for some and lowering the rates for many, the beginning of what Finance Minister Carole James called a “made-in-B.C. universal child care program.” Whether that journey will be seen to its end is an open question—as is whether the NDP will ever reach the $10-a-day care they promised—but there’s the progressive prudence again: step by step, day by day. It’s not the sort of thing you’d chisel a statue for, but it’s going to make life easier for a lot of people.

Child care is the affordability headline move in this budget, but it’s one of several items under that banner that also includes the elimination of the medical services premium (which will be replaced by a payroll tax), a PharmaCare deductible reduction for lower earners, the return of bus passes for those on disability assistance, and a freeze on a number of B.C. Ferries routes. If the Liberals failed to form government because British Columbians couldn’t feel the economy working for them, the NDP budget is designed to ensure voters know that government is in their corner.

The budget also delivered routine-ish spending on healthcare, primary and secondary education, and industry, which are expected (though not always delivered) by any government, left, right, or centre. But smaller, though notable, expenditures on supporting Indigenous languages in the province and increasing grants to the arts community signal a modest but notable commitment to the idea that cultural and artistic support cannot be forgotten.

What can be forgotten, it seems, is education, social assistance, and the campaign promise of a $400 renters’ rebate. Spending on postsecondary students is vanishingly thin in the budget, with a modest increase to the province’s tuition waiver. Social assistance rates remain embarrassingly paltry, if not Dickensian. And those who rent were abandoned, perhaps meant to be somewhat placated by the government’s scrapping of the ineffective first-time homebuyers’ loan program of their predecessors.

But who’ll be picking up the tab? In case you forgot your vote compass, the New Democrats are on the left of the spectrum. Accordingly: Real-estate speculators, foreign buyers, smokers, luxury car drivers, and people who breathe will be footing the bill. Housing-related taxes are going up, including a 5 per cent jump in the tax foreigners pay on properties in certain B.C. markets, a 2 per cent speculation tax for those who don’t pay income tax in the province, and an increase in the property transfer tax on properties over $3 million. There’s also going to be more sin tax on cigarettes, slightly more expensive Bentleys, and a $5 per tonne per year hike on the carbon tax. Much of this approach signals a timeless progressive intention to tax those who can afford it the most—and some towards the middle—to support those who need more help getting by. In the case of B.C. in 2018, however, “those who need more help getting by” include quite a few more individuals than you might expect, which accounts for the particular colour of the affordability lens.

While the health payroll tax will (rightly) annoy many, and while the budget is nowhere near full of universal programs ushering in a socialist utopia, the government is off to a compelling start that will make lives for many more affordable in the province, while modestly inconveniencing those who have affordability to burn. In this climate, that’s a rather remarkable feat.