Andrew MacDougall: Supporting French is part of being Canadian, but it's hard to get behind an organization that accomplishes nothing 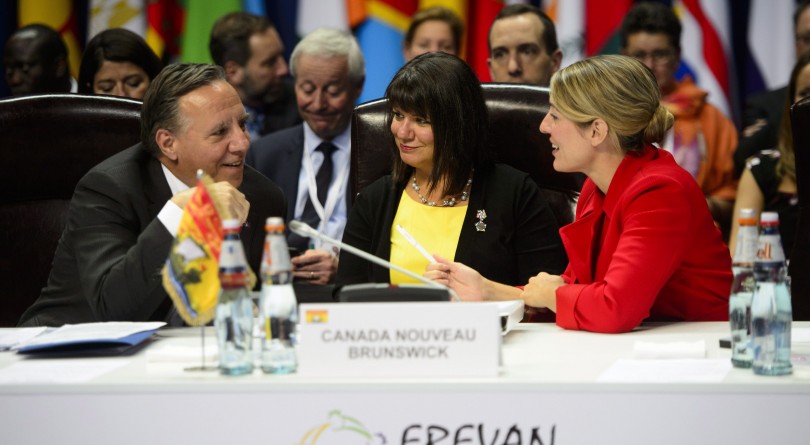 With the USMCA now safely guided to port, Justin Trudeau has shoved off to Armenia to participate in the 17th Summit of La Francophonie.

Yes, the Francophonie. In… Armenia.

That the summit is happening in this virtually French-free country (0.3 per cent of the population speaks the language) tells you everything you need to know about the relative health and relevance of the organization.

For an outfit whose only raison d’être is promoting and protecting the French language, having Armenia host the proceedings makes about as much sense as having Justin Trudeau host one of Donald Trump’s rallies.

This isn’t to single out Armenia, which has about as much claim as Albania, Bulgaria, Cambodia, Greece, and Vietnam—other members of the Francophonie—to host the meeting. Although, to be fair, at least Cambodia and Vietnam were once colonized by the French.

Of course, the Francophonie says it’s about more than French, that it also “promotes common values”. But it’s hard to get a read on what those values might be looking at the full list of member countries.

The Democratic Republic of Congo? The Francophonie was held there in 2012 and my only memory of it was Joseph Kabila piling his goons into the main auditorium during his speech to ensure a positive response. Well, that, and having to have an armed escort of machine-gun-toting soldiers for our motorcade ride in from the airport, which was only a short hop from rebel-held territory.

READ MORE: Chrystia Freeland and the art of the deal

Rwanda? Paul Kagame might make the trains run on time but, like Kabila, he’s not much of a democrat, and hasn’t managed to liberalize rights in his country in the wake of the horrific mid-1990s genocide.

Or how about Sao Tomé-et-Principé, a debt-ridden former Portuguese colony with a history of coups? French isn’t even one of its four official languages. Comment dit-on un “low bar”?

The Commonwealth might not be a club of the earth’s finest nations, either, but its bonds include language, a common legal heritage, and the shared history of the British Empire. Sure, there are a few tenuous or naff nations in there too (e.g. Mozambique and Vanuatu), but the Commonwealth at least pretends to care about freedom, human rights, democracy and the rule-of-law, as evidenced when South Africa, Zimbabwe and Fiji were turfed for various human rights violations.

Back to Armenia. Near as anyone can tell, the only reason Armenia sought membership in the Francophonie in 2012 was to gain a few allies in their long-standing beef with neighbouring Azerbaijan. Parlez-vous la sincérité? Then again, when you’re a former Soviet territory wedged in between Turkey, Georgia, Azerbaijan and Iran, I suppose you need all the friends you can get. And if lip service to French is the price to pay, you pay it.

To demonstrate their country’s commitment to the French language, the hosts will probably treat visiting leaders to a working session on ethnic Armenian Charles Aznavour’s (born: Shahnour Aznavourian) contribution to French culture, even though the recently-deceased singing legend, while unquestionably passionate about his ancestral homeland, was born and raised in France.

In terms of official business, the Francophonie Summit is properly lightweight. One weeps for Team Trudeau’s comms shop, who will have to scrape some bits and bobs together for the press to file on the ground, having already wasted their newsiest hit: the ditching of Michaëlle Jean’s bid to repeat as Secretary General.

This lack of heft should fuel another round of “what’s the bloody point of it all”, but it won’t. Questioning the utility of the Francophonie is an absolute non-starter in Canada, given the central fact of the French language in Quebec. It would be impossible for Canada to withdraw and save its money without sparking a massive row, even if the Francophonie does precious little to establish the French fact either in Canada or around the world, as evidenced by its thin list of “accomplishments”.

And I say all of this as someone who is bilingual, who adores French, who has a partner who is a native French speaker, who speaks nothing but French to his young daughter in London, England. I want French to be a central fact of my kid’s identity and culture no matter where she lives. For me, it’s a part of being Canadian.

That’s why it’s so hard to support an institution that doesn’t get very much done.

With global institutions of all kinds struggling for relevance in the age of populism, you would think that keeping the limp ones around for the sake of courtesy wouldn’t be on any globalists’ list of priorities, but there you have it.

And at 40-some million dollars in annual funding from Canada, the Francophonie isn’t free, even if the amount is a rounding error in the government’s overall finances.

What if Justin Trudeau channelled his inner Trump and shocked the Francophonie into relevance? If the Francophonie isn’t going to promote Canadian values, or is incapable of doing it, Canada should threaten to funnel its contributions elsewhere, perhaps to francophone communities in Canada outside of Quebec?

After all, the French language is of foundational importance to Canada and will survive on these shores, whether or not Canada is part of a do-nothing club.