Opinion: It's not just that the big increase punishes small businesses. The argument that the minimum wage hike was needed to keep pace with inflation is flat out wrong. 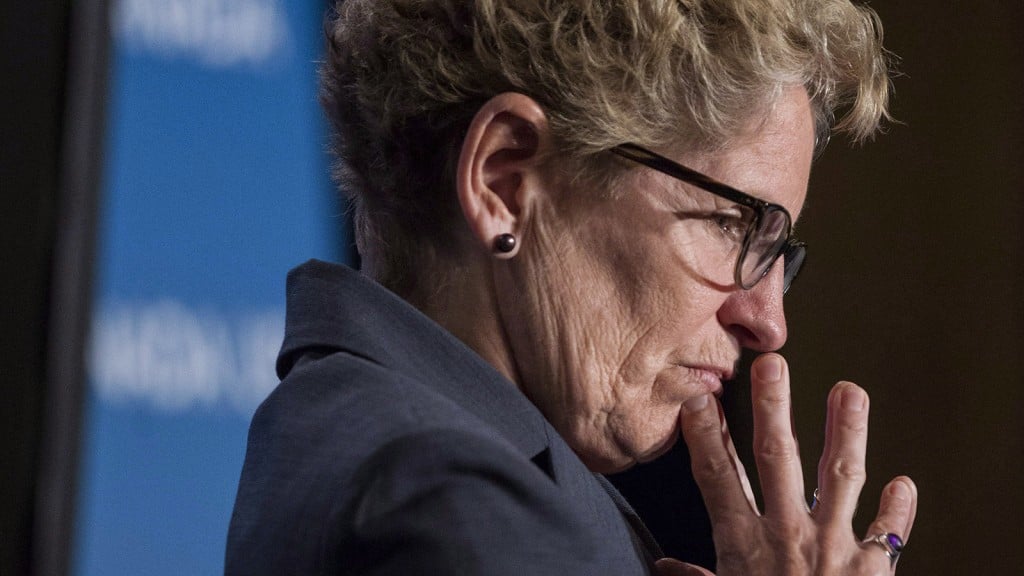 Mark Milke is an independent analyst, author and consultant in Calgary.

Remember the old joke about the man who kills his parents and then complains he’s an orphan?

Something like that unreal grievance applies to Ontario Premier Kathleen Wynne’s verbal attack on the families that founded Tim Hortons, some of whom still own a franchise. Recall how Ron Joyce Jr., and his wife Jeri Horton-Joyce, recently scrapped paid breaks for employees and will require them to pay for half their health and dental benefits. The move came in response to a 21 per cent increase in Ontario’s minimum wage, to $14 from $11.60 on New Year’s Day.

In response, Wynne claimed the franchise owner’s move was “a pretty clear act of bullying.”

I’m not surprised the Ontario premier would slag the Joyces; Ron Jr.’s father’s net worth (estimated at $1.4 billion) makes them an easy target for a premier eager to engage in class warfare to garner such votes.

The Wynne Strategy: Punch and redirect

Wynne’s politically inspired verbal punch allows her to redirect public attention from the real cause of such cuts in employee benefits: her government’s policies which have driven up costs for everything from power to pay and unsustainably so for most business owners. Unlike politicians who run red-ink deficits forever, business must remain in the real world. They can’t endlessly pay out more than they bring in at the till. That would lead to bankruptcy.

I digress, but let’s consider some of the arguments advance in favour of the recent—and rather high—minimum wage hikes.

One is that Ontarians cannot live on $11.60 an hour. Let’s call this the pretend-moral argument given it starts with a “should” as opposed to what’s possible. (It’s akin to telling a blind man to see but without the help of divine intervention.) Such assertions are of little help if the economics of a business such as cash flow or consumer’s abilities to pay higher prices are ignored.

To grasp this, forget statistical outliers like the son or daughter of the Tim Hortons founders. Instead, imagine most small business owners. Ponder a small sandwich shop with 10 employees who each work 40 hours a week, 50 weeks annually at minimum wage. Do the calculations back to last September when Ontario’s minimum wage was $11.40 and the extra cost is $52,000 annually, a 23 per cent cost increase for that business in just three months. It’s also more than the cost of two jobs at that sandwich shop.

That increase is why the Bank of Canada—a source the Wynne government will find difficult to dismiss—warns 60,000 jobs in Ontario and across the rest of the country may vaporize: because small enterprises can’t simply spend more on wages, on demand by politicians, much as some might like to operate in such a fantasy land.

To wit, the notion that a business owner and/or consumer should just “pay more” is a magical concept disconnected from reality; there is no guarantee consumers will show up to pay almost one-quarter more for their food now than they did four months ago. Nor are most small business owners awash in cash flow and profits: For some, that extra $52,000 might have been the salary an owner paid herself last year. Now that’s gone and she is supposed to work for free?

Another argument advanced for raising the minimum wage is to keep pace with inflation. Here, every provincial government has massively overshot the target.

In short, if that’s your argument, time to find a new one. In general, the focus on the minimum wage skips two useful issues:

First: Is it the best way to help the working poor? Answer: no, because the policy ignores the need for productivity gains and cash flow if wages are to be raised; it also ignores how targeted help is always better than virtue-signalling by governments using other people’s bank accounts.

COUNTERPOINT: Why a $15 minimum wage is good for business

Second: If politicians really wish to help those with minimum skills and poor job prospects, here’s some advice: stop killing blue-collar employment relative to the geographic or natural advantages that exist in those same provinces.

That includes manufacturing  jobs in Ontario killed off by ever-higher power prices and well-paid resource sector jobs in B.C., Alberta, Quebec and in Atlantic Canada—oil, gas, mining and forestry exists in all those places—that get killed or are never created in the first place because of government policy and/or chronic opposition to development.

A modest proposal: Focus on opportunity

Consider, when Alberta’s energy sector was allowed to thrive, the minimum wage debate in Alberta was peripheral. Between 1997 and 2014, just 1.7 per cent of Albertans made the minimum wage, the lowest proportion in the country. That’s because investment was gushing into the province. With help-wanted signs everywhere, employees—not employers—had the bargaining edge. Also, the investment flows meant high wages were sustainable. (For the record, the oil and gas sector has recovered south of the border where investment-killing carbon taxes are absent and protests et al. have less effect on that industry.)

Politicians who care to help the working poor and boost low-income wages should enact policies that allow entrepreneurs to flourish in their provinces. That’s what drives sustainable wage growth, not politically contrived, economically anti-reality policy which destroys jobs. Or, when coming from the Ontario premier, is also accompanied by the fake cry of a self-made “orphan,” a premier who blames businesses forced to grapple with burdens imposed by her own government.