You mean your family doesn't constantly talk about death?

Tabatha Southey: Planning for the end of life, passed from one generation to the next, is only prudent 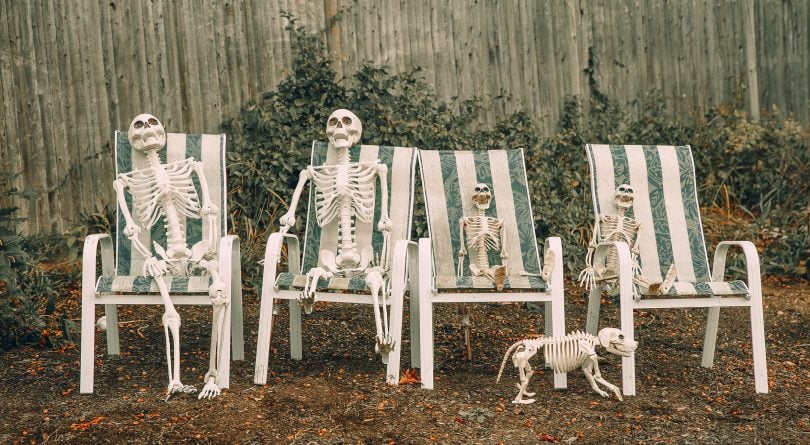 I’m often told that a lot of families have a difficult time talking about death, and I often wonder what they do talk about. How do they fill the hours? How do these families pass the get-togethers if not engaged in some sort of estate planning? Talking about death is what my family does; and for this reason I found myself unable to write a Maclean’s Before You Go column.

I’m not saying my family is macabre exactly, but viewed objectively, as if my spirit had departed my body and was floating over my mother, father and my three brothers—a perspective my parents would caution me to not consider, there being no afterlife—the Southeys make the Addams family look like the von Trapps, post-Maria, pre-Nazis.

Growing up it was all very “You are 16 going on 17, realistically, how long do you have left?” until it became “You are 29, going on 30, you need to make plans for your children in case something happens to you, in case you die.”

Die. Always “die.” Because no one in our house “went to a better place.” There were no euphemisms on my mother’s watch. I once said “passed away” in front of her and it was like I’d said what my friends very carefully called “the F-word.” Although I said that word with impunity if I dropped a hammer on my foot.

People died in my family—which is in fact rather long-lived—in, or at the end of, a heartbeat. Death was around the corner, always. There was no point in pretending otherwise. I was raised in dog years and so there’s been a sense that we’re running out of time to say what needs to be said, to tell each other we love each, to plan for our endings in my family for as long as I’ve been alive.

I am pretty sure my father pressed himself up against my beautiful mother’s glowing, pregnant belly and whispered, “If we die there’s a safety deposit box at the…”

When I was about seven years old, my parents came home from a rare night out and told me, beaming, that they’d just pre-bought funerals, so I had “nothing to worry about.”

Every part of my soul said “Oh,” but apparently my mouth said “What?” and my parents saw this as an opening for them to elaborate on the no-muss, no-fuss, certainly no floral-arrangement final resting they’d just attended a seminar about and signed up for. They, of course, seized on that elaboration opportunity with gusto. I mean, one can never be sure there’ll be another chance to tell your children you’re going to die because you might die and so they told me all about the deal on dying they’d scored until bedtime, a bedtime that, like the other bedtimes, involved a “Goodnight” and an “I love you.” Just in case.

“Before you go…” my dad said last summer, pulling some documents from his pocket. My parents had come in to town and were helping me with the gardening.

“Dad,” I said, “I’m just going to the hardware store to get a washer for that hose.”

“Do you have enough money?” he asked.

“But what if you get cancer?” he said.

“Hey,” I replied, attempting, as I occasionally do, to change the subject, “it’s getting late and I’m tired. When I get back, who wants to order…”

“A do not resuscitate?” said my mum brightly, “We did that already!” and she went to put on some potatoes.

My brothers live in the United States now and my parents travel a lot, never failing to call out to me from the departure lounge, “Goodbye, we love you! If we die, don’t fly the bodies home, it’s a racket!” But despite all this to-ing and fro-ing, once a year or so the whole family likes to get to together to exchange power of attorney.

Once, after a Sunday of soup, sandwiches and the type of in-depth scenario analysis that only a professor of economics like my father can offer his grandchildren, I explained to my children on the drive home that worrying about them is how my father expresses affection. “Say it by analyzing possible, bad, future events and considering alternative, even worse, possible outcomes,” as an economist might say.

“He loves us a lot!” said my youngest in wonder.

“But what if a meteor came crashing down to Earth, burning hotter and hotter as it passed through the atmosphere, getting smaller and smaller, but not quite burning away to nothing before it could hit the surgeon operating on a brain tumour I picked up on a trip to a hardware store?” said my older child, thoughtfully.

“And interests rates went up,” I said.

“It’s something to think about anyway,” I said. “I love you.”