Image of the week: Scorched hulks of cars in Paradise speak to the uncertainty and dread gripping America's most populous state 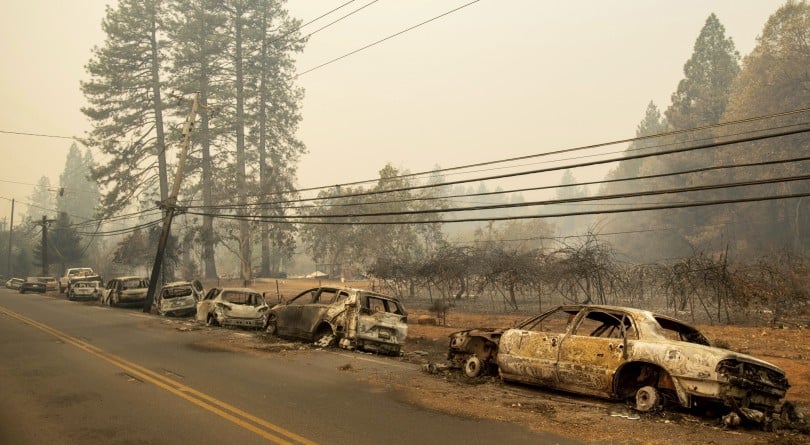 The scene in Paradise, Calif., on Nov. 9 (Noah Berger/AP/CP)

With more than 600 people missing, dozens dead and nearly 12,000 buildings razed, the wildfires decimating swaths of California are officially the state’s deadliest on record. But as the fires charge into their second week, they’re spreading more than just destruction: they’re also creating mass chaos. The number of displaced people is fluctuating daily—it more than doubled from 300 to 631 on Nov. 15, a leap more reflective of confusion among frantic bureaucrats than the inferno’s lethal speed. Conspiracy theorists on social media are raking up thousands of retweets by posting years-old images of light beams connecting a blue sky to flames on the ground. (They’re rocket launches, really—unless you believe in state-secret alien attacks.) President Donald Trump’s first public reaction was to blame the blazes on California’s fiscal management, throwing more discord into an already tense situation. And photos of abandoned cars, burnt out and lined up on highway shoulders, have left hapless onlookers to wonder the fates of those drivers: whether they managed to escape, or more gruesomely, whether their bodies remain somewhere amidst the ash.

FILED UNDER: California wildfires Editor's Picks Image of the week