12 questions for Justin Trudeau about the Kokanee 'Incident' 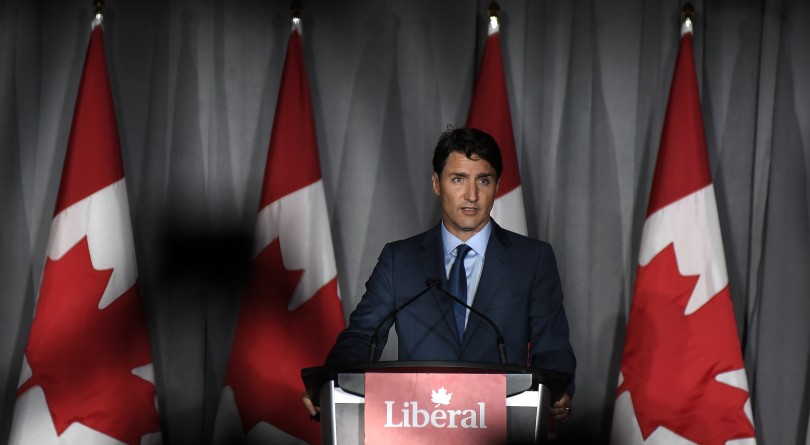 Justin Trudeau, Leader of the Liberal Party of Canada, speaking to supp orters at a Liberal fundraising event in Brampton, Canada on July 5, 2018. (Photo by Arindam Shivaani/NurPhoto via Getty Images)

Since July 1, Justin Trudeau’s responses to media about the reported Kokanee “Incident” have raised more questions than they answered. This would be the incident dating back to 2000 in which a 28-year-old Trudeau, years from entering politics, was accused by a reporter with the Creston Valley Advance, a local BC paper, of “inappropriately handling” and “groping” her at the Kokanee Summit music festival. The account was published in an unsigned editorial in the paper (more detail here).  At a press conference in Regina last Sunday, the PM echoed an earlier one-paragraph statement issued by the PMO that he remembers attending the festival “but doesn’t think he had any negative interactions there.” “I remember that day in Creston well,” Trudeau said. “I had a good day that day; I don’t remember any negative interactions that day at all.” Days later, at a Queen’s Park presser, the prime minister contradicted himself, saying that maybe there was an “interaction” that could have been interpreted as negative by the women involved but that he is confident he did not act in an inappropriate manner. He also admitted “I apologized in the moment.”

Trudeau failed to answer the question a reporter put to him at the time: “Why not call an independent investigation and put the story to rest?”  Instead, he set up duelling messaging that would be repeated in the following days: first, that he is confident “no inappropriate behaviour” took place; two, that “we need to engage in deep reflection about the fact people perceive situations differently,” a fact that is empirically true but does not address the situation at hand.

On CBC’s Metro Morning on Friday, the PM reiterated the talking points: “The way the same interaction can be experienced by different people is a really important thing to get our minds around and reflect on and that’s exactly what we need to be doing as a society and that is what I am doing,” he said. The message was recycled in a television interview  that morning: “And I recognized she experienced it in a different way than I did and that’s why I was apparently quick to apologize for it,” Trudeau said. In that interview, Trudeau confirmed there would be no investigation into his behaviour 18 years ago: “We have talked to a broad range of experts on these……and I’ve been reflecting very carefully on this and we’re moving forward in the right way.” He also referred to the fact the reporter working in “a professional context:” “Who knows where her mind was,” he said.

The result is a full-blown comms disaster, as the prime minister attempts to extend his brand as a feminist concerned about sexual assault and harassment while at the same time detonating his brand credibility on the issue. The story itself is complicated, given that the woman who made the allegation in 2000 has stated that she does not want to be involved now and has asked for privacy that must be respected. On Friday night, she “reluctantly” issued a statement, “Creston Music Festival Incident” in which she identified herself as the reporter, and said that “The Incident referred to in the editorial did occur, as reported”;  she also confirmed that Trudeau apologized the next day. She will not give any further statements or  interviews, she said, and “will not be pursuing the Incident further.” Thus there is no contemporaneous allegation or report in this case of the sort that have triggered investigations of other politicians.

Predictably, the discussion that has been weaponized politically, with any mention of it reduced to a partisan attack.

But it’s possible, based on what we know, to hold two thoughts at once. One, that Trudeau’s political career should not necessarily be derailed; and two, that we require more candour and a straighter story from the PM, particularly given his much-vaunted leadership on issues surrounding sexual assault and his zero-tolerance policy on sexualized misbehaviour within the Liberal party.  Maclean’s requested an interview with the prime minister; the PMO responded that was not possible in the near future “due to the PM’s packed schedule.”

Here are 12 questions I would have asked:

1. Prime Minister Trudeau, on Thursday you said “Obviously this has been a situation very much on my mind over the past couple of weeks.” Given your longtime “involvement in discussions around sexual assault and behaviours,” as you yourself has said, why didn’t you come forward to address the allegation directly weeks ago, when it first resurfaced, rather than having the PMO issue a statement?

2. You told the CBC: “I remember that the encounter happened. I do not remember any inappropriate actions.” What is your memory of the encounter?

3. At Queen’s Park you said, “And again I feel…I am confident…that I did not act inappropriately.” What is your gauge for “appropriate” or “inappropriate” behaviour?  Did a recent National Post investigation  that quoted the editor of the Creston Valley Advance saying the journalist in question had come to her 18 years ago “distressed”  over “brief, unwanted touching” involving you alter your thinking?

5. The #MeToo movement has put the spotlight on how rampant sexual assault or harassment is, particularly in the workplace and by those in power positions. You were a well-known son of a former prime minister attending the festival in a high-profile position. In retrospect, do you see an unequal power dynamic between you and the journalist?

6. You told CP24 there would be no investigation, noting “We have talked to a broad range of experts on these.” Who did you consult with? How does this situation differ from others that saw members of the Liberal party investigated?

8. You said Thursday that neither you or your team has reached out to the woman who has stated that she doesn’t want to be involved now in any way, saying you “don’t think that would be appropriate at all.” That makes sense given any such entreaty could be construed as intimation. But what stopped you from contacting her directly after reading the 2000 editorial, one the National Post confirmed she wrote herself?

9. On Thursday you said “this lesson that we are learning—and I’ll be blunt about it—often a man experiences an interaction as being benign or not inappropriate and a woman, particularly in a professional context, can experience it differently. We need to respect and reflect on that.” Do you believe both versions of events can be true? And why does it matter whether the “context” is professional or not?

10. What accounts for different standards of what constitutes “appropriate” and “inappropriate” behaviour between women and men?

11. You have said that women who come forward with complaints of sexual assault and harassment must be supported and believed. Do you still believe that? And if so, why are you giving equal weight to both versions of events in this case?

12. You ended your Thursday press conference by saying “We need to respect and reflect on that.” “Reflection” is a word you’ve used repeatedly. What have you learned  reflecting on this matter?