338Canada: A final B.C. election projection and an overwhelming outcome

Philippe J. Fournier: A flurry of polls over the past week put the B.C. NDP odds of winning at 98 per cent, with 59 seats and possibly the highest vote share in its history 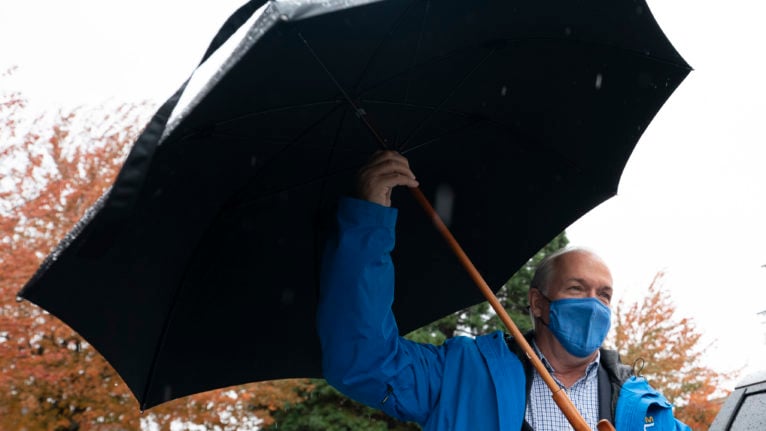 Canada’s second pandemic election is coming to an end today, as British Columbians will head to the polls to elect the next 87 MLA’s of the B.C. legislature. According to Elections B.C., 1.1 million votes have already been cast, either in advance voting or by mail, a stunning number considering just over 1.8 million ballots were cast in total in the 2017 election. Although there are still some close races to watch according to this final 338Canada B.C. projection, the province-wide outcome should be crystal-clear according to a flurry of polls published in the last week of this election: John Horgan and the NDP should win a majority at the British Columbia Legislative Assembly.

Indeed, the polls never really measured a close race since the writ was drawn up in late September, with the NDP leading the Liberals by double-digits in all but one (early) poll.

Considering each poll’s uncertainty (or margin of error), we cannot state that the differences between pollsters are that significant. Naturally, they can’t and won’t all be right on the nose, but the variance from one poll to another is not so wide that it will provoke some kind of crisis in polling circles.

Here is the bullseye graph comparing top-line numbers from the last polls from each pollster on the field in this campaign (the maple leaf in the centre of the graph represents the 338Canada popular vote averages for the NDP and Liberals):

Using all this data, we present you the final 338Canada B.C. projection.

John Horgan’s NDP is projected at an average of 50 per cent of the popular vote, which, should it materialize tomorrow, would be the highest vote share in the party’s history:

The B.C. Liberals are a distant second with 35 per cent on average. The Greens, which only run candidates in 74 of the province’s 87 electoral districts, are projected at an average of 13 per cent.

With these levels of support, here are the seat projection averages:

You may notice I left the first decimal in the seat averages. That is because by rounding each one and adding them up, the total would be 86. To make sure the total is 87, we have to round up the number with the highest decimal, and in this case we will round up the NDP average to 59 (although to be fair, one single seat in the average does not matter much considering it’s much smaller than the projection’s confidence intervals. Nevertheless, for the curious minds out there, the Green average is 1.39 and the NDP’s, 58.43.)

As you can see on the seat probability density graph below, the NDP and Liberal curves barely overlap:

…meaning that for the Liberals to win tomorrow, the data collected by all these professional firms would have to be wrong. And I do mean really wrong : Not Trump-over-Clinton in 2016 wrong (a few points in a few key states), or not even 2013-B.C.-election wrong (an average ten-point miss in the polls for the B.C. Liberals). In fact, should the B.C. Liberals pull this off, they would have to benefit from a polling error that would make 2013’s polling miss look like a small blunder.

Therefore, according to the 338Canada model, the NDP’s odds of winning the election are 98 per cent, odds similar to those of Jason Kenney’s UCP on the eve of the April 2019 Alberta general election:

But then again, as I have mentioned before, support in polls is only theoretical support. If NDP voters get complacent and do not bother voting, we could witness an unexpected outcome. However, considering how many British Columbians have already voted, this scenario would be highly unlikely.

We shall know tomorrow night whether John Horgan’s snap-election gamble will pay off. If the NDP does indeed win a majority in Victoria after this campaign, the only minority governments left in Canada would be in Charlottetown and… Ottawa.

The complete map of this projection is available here. To find your electoral district, consult this list of all 87 districts or use the regional links below:

For details on 338Canada’s methodology, visit this page.