338Canada: An early B.C. seat projection gives a slight edge to the NDP

Philippe J. Fournier: The 338Canada model has the B.C. NDP beating the Liberal seat count in 70 per cent of all simulations. But it's still anyone's game. 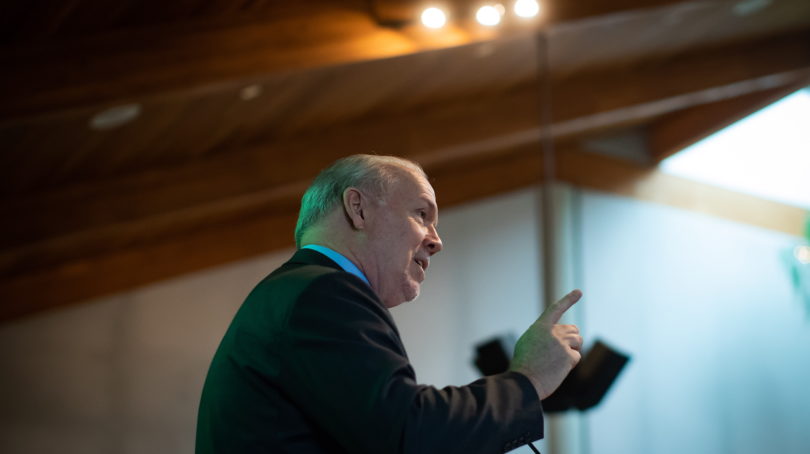 Horgan speaks about the economy during an address at a Surrey Board of Trade luncheon, in Surrey, B.C., on March 10, 2020 (CP/Darryl Dyck)

While media attention is wholly focused on the current COVID-19 pandemic spreading around the globe—and rightly so—many people, including regulars of this column, may wish to get away from this anxiety-inducing madness for a few hours. Video games, movies, TV series, books and magazines are all great way to entertain the mind and temporarily take the brain to a more peaceful place.

Whatever helps. You do you.

My college has shut down and classes have been suspended for two weeks, but I suspect this forced break will last somewhat longer. Exponential curves are sometimes confusing for the non-initiated, but closing schools early in a pandemic may dramatically reduce the spread of virus (and, sadly, the body count).

Therefore, with no more exams to mark and classes to teach I decided to dive deep into a project I had initially planned for next summer: the 42nd British Columbia election, which is tentatively scheduled for fall 2021 at the latest. However, given the precarious state of the B.C. Legislature seat-wise (both the B.C. NDP and B.C. Liberals currently stand at 42 seats in the 87-seat legislature), Premier John Horgan could potentially set up and lose a confidence vote before then (although a spring 2020 election now appears highly unlikely given the current crisis).

Earlier this week, the Angus Reid Institute published yet another part of its latest 5,000-respondent poll, which contained the voting intentions of several Canadian provinces, including British Columbia.

Here were the B.C. numbers from Angus Reid:

John Horgan’s NDP leads the field with 36 per cent support, five points ahead of the B.C. Liberals at 31 per cent. The Green Party of B.C. has surged to 21 per cent according to this poll, four points higher than its 2017 election result of 17 per cent.

While voting intentions data has been scarce over the past year (see list of B.C. polls on this page), we launch today a preliminary 338Canada projection page for British Columbia, hoping more polling will be conducted in the province as we get closer to next year’s general election. See methodology here.

Using past election results and opinion polls, here are the popular vote projections for March 15, 2020:

On the graph above, the numbers represent the vote projection weighted averages, and the coloured bars are the 95 per cent confidence intervals. Since we have had little data to work with of late, the uncertainty in these numbers remains significant. The NDP leads with an average just north of 40 per cent. The B.C. Liberals, under leader Andrew Wilkinson, stand right in the thick of it with 37 per cent. The B.C. Greens remain in third place with 20 per cent of support.

Using the currently available data, here are the provincial seat projection as calculated by the 338Canada electoral model:

The NDP seat projection average currently sits at 46 seats and the Liberals, 38. However, notice on the graph above how much the two leading parties’ confidence intervals overlap. With more polling, if the data is consistent, these uncertainty bars should narrow down somewhat.

Also, we should keep in mind that the majority threshold at the Legislative Assembly of British Columbia is 44 seats (in 2017, the reigning B.C. Liberals won 43 seats, a single seat short of a majority). The projection above does give a slight edge to the NDP, but I would have no confidence whatsoever on the hypothetical outcome of an election with such numbers. In other words, like in 2017, every scenario is possible at this point.

Here is the broad picture regionally:

The 338Canada model ran 50,000 general election simulations and had the NDP winning the most seats in 70 per cent of all simulations (see graph below). One in four simulations was won by the B.C. Liberals.

The remaining 5 per cent had the NDP and Liberals tied in their seat totals, meaning the Green Party could, once again, play king maker.

The next B.C. provincial election could have major national consequences, and we will follow closely the race in British Columbia to see whether Canada’s only current NDP government will fare in the year ahead.

Visit the 338Canada British Columbia page for all of B.C.’s 87 electoral district projections. Stay safe out there, dear readers.