Canada is not immune to Trumpism

Philippe J. Fournier: There is ample evidence that the buds of authoritarianism are already germinating here. Canadians should not be complacent. 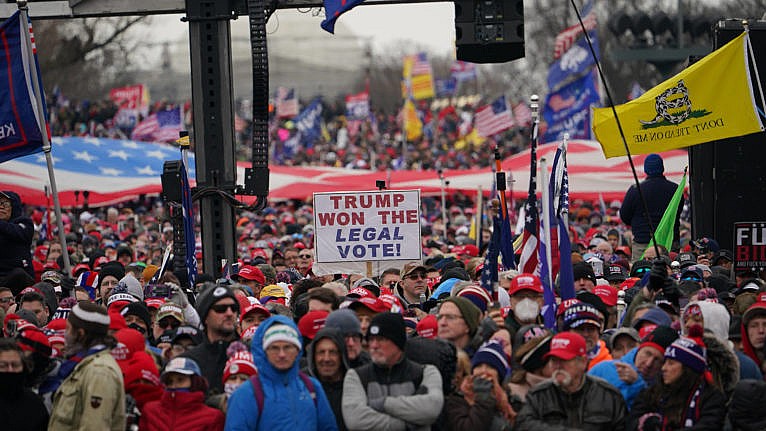 Trump speaks to supporters near the White House on Jan. 6, 2021, in Washington, DC (MANDEL NGAN/AFP via Getty Images)

In the last month of the 2020 U.S. presidential election, I published  an analysis of a Léger poll about Canadians’ impressions of the two main candidates. “If you could vote in the U.S. presidential election, would you vote for Joe Biden or Donald Trump?” was asked to a panel of over 1,500 Canadian respondents and an overwhelming majority, 84 per cent of decided respondents, chose Biden over Trump. Roughly one of six voters in Canada sided with Donald Trump.

Breaking down the results from the poll’s subsamples, we saw generally uniform data through age groups and regions of the country. And while Trump was a little more popular in Alberta than other provinces, still two thirds of Albertan respondents favoured Joe Biden over Donald Trump.

However, when dividing the results by voting intentions in Canada, the proportion of Trump supporters shot up to just over 40 per cent among CPC voters (compared to 6 per cent of NDP voters, 7 per cent of Liberals):

Naturally, it is entirely expected that voters of the main right-of-centre federal party in Canada would support the Republican candidate in a U.S. election in higher numbers than, say, Liberal or New Democrat voters. After all, Canadian conservatives were similarly split between Barack Obama and John McCain in 2008, or between George W. Bush and Al Gore in 2000, according to polls at the time.

Nonetheless, that proportion caught many by surprise. Why? Because traditional conservatives more often than not respect norms and traditions, and it was crystal clear to whomever had paid attention to news and social media in the past years that Trump never had any intentions whatsoever to concede gracefully and to respect democratic norms, for Donald Trump is not as much a Reagan or Bush conservative as an authoritarian despot wannabe.

In the analysis of this Léger poll, I wrote that I wondered how Conservative leader Erin O’Toole would steer a ship comprised of traditional conservatives, Red Tories and a significant fraction of Trump supporters: “The CPC might very well be a big-tent party, but how much can one stretch its fabric before it snaps?” A National Post columnist likened this to “pearl clutching”, that it was but a mere hypothetical question about another country—as if having a sizeable fraction of your voter base siding with a demonstrably authoritarian leader was business as usual.

But is it business as usual? National Post columnist Conrad Black for one (and countless self-described “journalists” from Trump-friendly publications) recently parroted Trump’s unfounded claims of mass voter fraud, hinting that the election had indeed been stolen from Trump and his 75 million voters. Actual proofs of such wrongdoing, ones that would hold up in a court of law, were conveniently not laid out in said columns.

Shortly after the U.S. election unfolded in November, the Angus Reid Institute took the pulse of Canadian voters on the outcome of the election: 18 per cent of Canadians and 41 per cent of conservative voters disagreed to the statement: “The U.S. election was fair and should not be contested”. I truly wonder what that number would be today, not only after Trump and his team of lawyers spent the past months alleging mass voter fraud without proof, adding countless defeats in state and federal courts, but after Trump incited the violent riots carried out on the Capitol on Jan. 6.

What fraction of Canadian voters would still side with the outgoing president today? I wish Canadian pollsters in the field today would inquire about it. Hopefully we will have a clearer picture soon, not to “clutch pearls” or for the sake of a purity test, but in an effort to measure the growth of authoritarian tendencies in Canada.

Could Trump-style populism grow and become a force in Canada? EKOS Research Associates President Frank Graves wrote extensively on the subject. Graves studied the rise of “Ordered Populism” as an outlook on society, which “emphasizes obedience, order, hostility to outgroups,” and “stresses moral certainty, not reason and evidence.” Adherence to ordered populism, or lack thereof, was a growing predictor of voting trends south of the border in the Trump era. In a recent paper titled “Northern Populism: Causes and Consequences of the New Ordered Outlook”, Graves writes that “trust in news and journalists has risen generally [in Canada from 2011 to 2019], but has fallen sharply with conservatives who were far less skeptical of journalism and news a few years ago. This reﬂects the emergent fake news convictions so evident in supporters of Trumpian populism.”

Attacks on institutions from politicians can have lasting effects, and can be incredibly hard to reverse. In its latest American survey fielded just before the Capitol riots, Léger measured that more than half of Trump voters are still convinced Trump actually did win the election, and more than 80 per cent support Trump’s continuing efforts to claim victory. In a poll fielded on the night after the riots, YouGov measured that 62 per cent of American voters saw the storming of the Capitol building as a threat to democracy, including 93 per cent of Democrats, 55 per cent of independents and… only 27 per cent of Republican voters. “In fact, many Republicans (45%) actively support the actions of those at the Capitol, although as many expressed their opposition (43%).” (See full report from YouGov here.)

Obviously, this is a wide-ranging and highly complex topic, which requires careful analysis by political scientists (and much needed nuance by all). Nonetheless, if Trumpism as an ideology is slowly creeping north of the border, we could wonder: How long before Trump-loving Canadians claim that Canadian elections are “rigged” should they not like the results?

Canadians should not be complacent about what happened in the U.S. capital on Jan. 6. Canada is not the United States, but neither is it immune to the erosion of democratic institutions should some politicians decide to exploit hate and fear for political gain. There is ample data showing that buds of authoritarianism are already germinating here.