Philippe J. Fournier: A new Mainstreet/338Canada poll shows the PC Party opening a huge lead in every region of the province over the second-place NDP 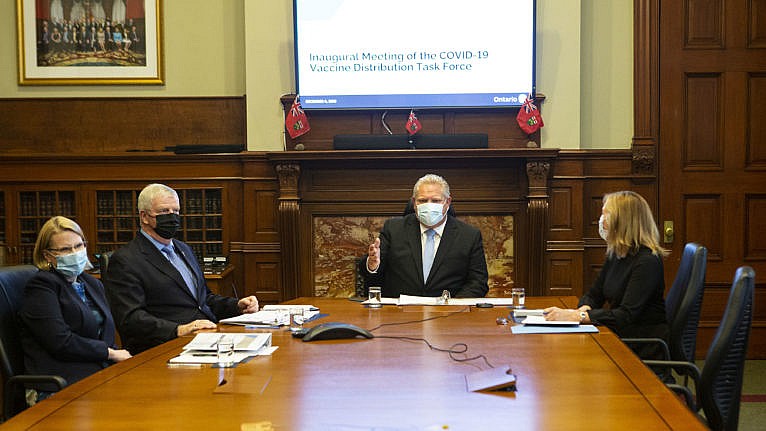 Opinion polls in Canada from the past months have shown that Canadians are generally (although not unanimously) satisfied with their elected officials’ handling of the COVID-19 pandemic. While it is true that some of these numbers have fallen in recent weeks with the second wave of the virus hitting harder than the first wave did (especially in the Prairie provinces), as a general rule, premiers in Canada have for the most part increased their own support with their handling of the pandemic so far.

In Ontario, although voting intentions showed a close three-way race back in February and March just as the Ontario Liberal Party was electing Steven Del Duca as its new leader, numbers throughout the summer and fall 2020 showed two distinct trends: Doug Ford’s PC re-gained its lost support, while both the Ontario Liberals and NDP were slipping.

It appears these trends have continued, according to a new exclusive poll from Mainstreet Research commissioned by 338Canada.

In this new poll, Doug Ford’s Progressive Conservative Party grows its lead among decided voters to a stunning 46 per cent, more than 20 points ahead of second-place Ontario NDP at 23 per cent. The Ontario Liberals, after enjoying a modest new-leader-bump in the spring, sit in third place with 20 per cent support—a level of support similar to its disastrous 2018 election result.

These province-wide levels of support may certainly seem impressive forFord’s  PC, but it is by breaking down these numbers by regions and demographics that we can really capture the scope and depth of this lead. While we must use caution with a poll’s subsamples because of higher margin of error, the PC is nonetheless measured ahead in every region of Ontario by double-digits, including a 16 point-lead in Toronto, a 22-point lead in the GTA, and a 30-point lead in south central Ontario.

As for the demographic breakdown, the PC is leading by more than 30 points among men, 8 points among women, and is also ahead of its rivals in every age group, including a 30-point lead among voters aged 50 and over.

Consider the following graph. It depicts the 338Canada projections for Ontario since January 2020:

As stated above, Doug Ford’s standing in the polls in early 2020 was tenuous at best with a near statistical tie with the OLP and ONDP. Perceptions of the PC Party have improved significantly in the second half of 2020, and the PC now finds itself slightly above its 2018 results in terms of average popular support.

We add this latest Mainstreet Research poll to the 338Canada Ontario model (all Ontario polls are listed on this page). Taking into account all this publicly available data, the Ontario PC would easily cruise to a crushing majority victory at Queen’s Park with current levels of support. Indeed, the PC wins an average of 88 seats—25 seats above the threshold for a majority at the Ontario Legislative Assembly:

Naturally, it should be stressed that the PCs also benefits from a near-perfect split among the two main opposition parties. With these levels of support, the ONDP would be reduced to 22 seats on average, significantly below its 40-seat result of 2018. As for the OLP, it wins an average of 13 seats, marginally better than the 7 seats it won back in 2018. The Ontario Green Party would most likely retain its lone seat of Guelph, although, without specific local data, the uncertainty of district projections remains high.

Here below are the seat probability densities for the main three parties, which shows the averages (dark lines) as well as worst- and best-case scenarios of each party:

This Mainstreet poll does not arrive in a vacuum: Other recent Ontario polls have also shown that Doug Ford’s handling of the pandemic has been generally well received by Ontarians: In its latest weekly update, Léger measured that 62 per cent of Ontario voters were satisfied with their provincial government, a fraction that goes beyond partisan lines. Also last week, the Angus Reid Institute published similar results in its own survey, with 55 per cent of Ontario voters approving of Doug Ford’s performance as Premier. Finally, earlier this week, Campaign Research released its latest Ontario numbers and also measured Doug Ford comfortably ahead in voting intentions.

The next Ontario election is scheduled for June 2022—a distant 18 months away from now—so these numbers should not be viewed as a prediction of how Ontarian voters will behave by then, but rather as a snapshot of the current political landscape in the province. Similar to François Legault’s standing in the National Assembly in Quebec, it appears Doug Ford remains solidly in command over a divided opposition at Queen’s Park. The next year ahead will be challenging for Ford and the Ontario Tories: a massive vaccine rollout operation to be coordinated with the federal government, deficits of historic proportions, and, hopefully, a return to “normal” life and economic growth. How well or how poorly the PC manages these challenges of 2021 will certainly set the stage for the 2022 Ontario campaign.

For complete numbers on this 338Canada projection, visit the 338Canada Ontario page. The full map is available here. You will find all 124 electoral district projections on this page.

Mainstreet Research collected data from 1,014 potential Ontario voters on December 5, 2020 using IVR technology. This probabilistic poll has a margin of error of 2.9%, 19 times out of 20. The poll was commissioned by 338Canada/Qc125. Here is Mainstreet’s full report with complete data tables.