Philippe J. Fournier: An early look at the Ontario election projection shows dramatically different numbers from 2018, but the PCs still benefitting from a divided opposition 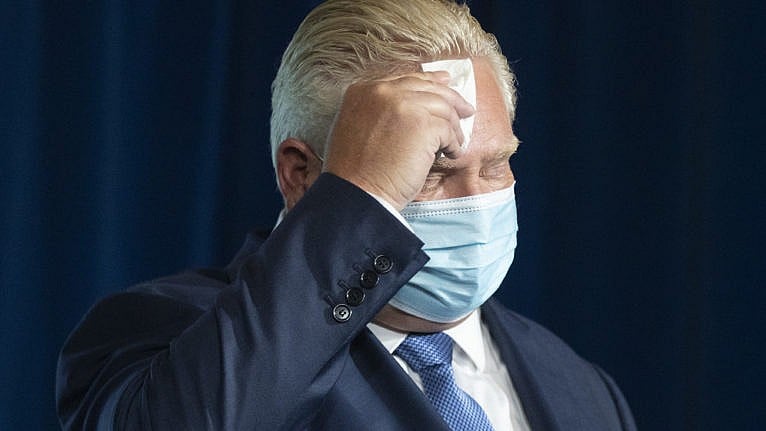 Ford attends a press briefing at the Queens Park Legislature in Toronto on Oct. 15, 2021 (Chris Young/CP)

We may still be eight months away from the 2022 Ontario general election, but it sure feels like the pre-campaign has already begun. Shortly after Lt.-Gov. Elizabeth Dowdeswell delivered Premier Doug Ford’s latest throne speech in early October, the New Democrats and Progressive Conservatives (PCs) embarked on an advertising blitz trying to define themselves and their opponents with next spring’s election in mind. And, according to a new Léger poll published by Postmedia earlier this week, the race for power at Queen’s Park could potentially come down to merely a handful of points for or against each party.

According to Léger, Doug Ford’s PC Party remains in the lead with 35 per cent of voting intentions province-wide, a notable but modest 5-point lead over the Ontario Liberal Party (OLP). Andrea Horwath’s NDP takes third place with 25 per cent. These numbers are dramatically different from the outcome of the 2018 election, when the PCs secured a majority with close to 41 per cent of the popular vote. The NDP had gotten just under 34 per cent, and the Liberals, who had been in power for the previous 15 years, collapsed to just under 20 per cent.

The Ontario PCs should thus still be considered the favourites at this point in time, especially with a double-digit lead in the seat-rich GTA-905 region (41 per cent to 29 per cent for the OLP, according to Léger). However, as we will see below, these numbers suggest the PCs would need several close splits going their way in order to keep their majority at Queen’s Park. If the Ontario Liberals do climb back to the low-30s in popular support, the most likely outcome would be the PC winning a plurality, but not a majority of seats at the Ontario Legislature.

However, the OLP getting back into contention remains a big “if”. While the Liberals stand in second place in voting intentions, leader Steven Del Duca still has the lowest profile of the main party leaders. In fact, Léger’s poll measures that fewer Ontario voters hold positive impressions of Del Duca (25 per cent) compared to Premier Ford (38 per cent) and Opposition leader Andrea Horwath (37 per cent).

However, Del Duca’s lower notoriety also means he is not perceived as polarizing a figure as Ford, of whom 54 per cent of voters hold negative impression. NDP leader Andrea Horwath also has a high level of negative impressions with 41 per cent. According to the latest Léger numbers, only 32 per cent of Ontario voters view Del Duca negatively. (In fact, all Ontario party leaders, including Green Party of Ontario leader Mike Schreiner, score negative net impressions among voters).

As mentioned above, had the Ontario election been held this week, the most likely scenario would have been Doug Ford’s PC winning the most seats, but falling short of a majority. According to the 338Canada Ontario model, the PC win an average of 53 seats, 10 seats below the 63-seat majority threshold. The Ontario Liberals stand at 45 seats on average, and the Ontario NDP falls to 25 seats.

As you may see on the chart below, the seat distributions for the OLP and PC are highly asymmetrical. The PC holds the highest floor of all parties and are currently the only party whose confidence interval extends into majority territory. In contrast, the OLP’s ceiling extends to just below the 60-seat mark, while its seat floor goes as low as the low-20s. Such wide and uneven distributions occur when there are a high number of close three-way races, which tend to be far more unpredictable.

It is no secret that Doug Ford has benefitted from a split of the centre and centre-left vote back in 2018, and the newer numbers from Léger indicate that an almost even division of non-PC vote remains the most likely path to re-election for Ford. While Andrea Horwath still enjoys higher support than traditional NDP levels in Ontario, she has not yet been able to portray herself and her party as the most suitable replacement for Ford according to the available polling data. While Del Duca is still unknown to many Ontario voters, which in itself poses a major challenge for the OLP, this data suggest he has the most room to grow among opposition party leaders.

Additionally, Andrea Horwath could face major hurdles getting her party’s vote out come election time, a challenge similar as the federal NDP in last month’s federal election. As was the case with Jagmeet Singh’s NDP, Léger measures Ontario NDP support highest among voters aged 19-34 years old (34 per cent) and lowest among voters 55+ years old (22 per cent). Let us recall that many pollsters had the federal NDP at or above the 20 per cent mark down the stretch, but the party only captured 17.8 per cent of the popular vote. Such is the unpleasant tendency for political parties that enjoy high popularity with younger demographics.

With eight months to go, these early projections do not have predictive value, but allow us to imagine several interesting what-if scenarios, not least of which would be: Could Doug Ford remain Premier if the PC wins the most seats, but fails to keep its majority? Could the possibility of ousting Ford be enough to cool the obvious animosity between the OLP and NDP? Will one these parties manage to coalesce the anti-Ford vote?

We will follow these numbers closely over the coming months.

Details of this projection are available on the 338Canada Ontario page. To find your home district, use this list of all 124 provincial districts, or use the regional links below: