Philippe J. Fournier: A new poll shows recent events have taken a considerable toll on PC support, putting the party just barely ahead of the Ontario NDP and Liberals 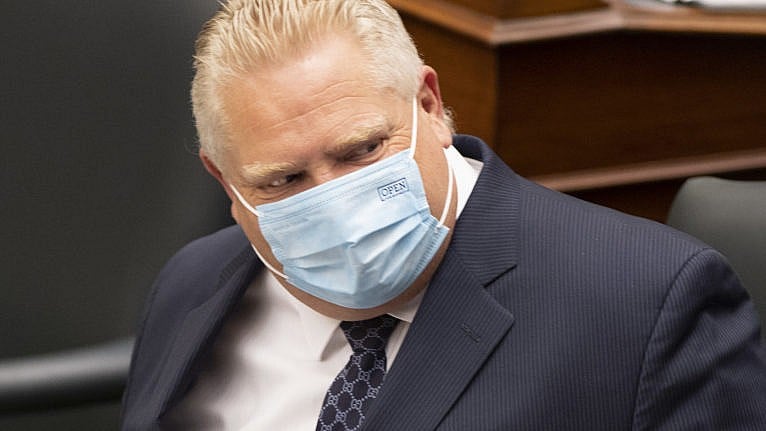 Ford prepares for Question Period at Queen’s Park on May 5, 2021 (Frank Gunn/CP)

After a tumultuous spring marked by a deadly third wave of the pandemic in Ontario, Doug Ford’s Progressive Conservative Party has taken a substantial hit in popular support according to a new Mainstreet Research poll of Ontario voters.

When Mainstreet last took the pulse of Ontario voters back in February, Doug Ford enjoyed a crushing 18-point lead over its rivals, with a level of support even surpassing the party’s 2018 majority victory results. This week however, Mainstreet measures that the PC has shed some notable support since, with both the Ontario Liberals and Ontario NDP gaining ground in the horse race.

Among all the poll’s respondents, the PC leads with 26 per cent of support. The NDP and Liberals are tied for second place with 23 and 22 per cent respectively. The Greens are a distant fourth with 5 per cent. However, no fewer than 20 per cent of the poll’s respondents claim to be undecided. Considering the poll’s margin of error of ±3 per cent (19 times out of 20), these numbers indicate a statistical tie between the main three parties.

Among the decided and leaning respondents, the PC pulls ahead with 33 per cent of support province-wide. Comparing this result with the last time Mainstreet was on the field in February, it is a drop of 10 points for the PC—well outside the poll’s margin of error.

The NDP and Liberals are statistically tied for second place with 28 and 27 per cent, respectively. Since last fall, there has been some significant polling disagreement on where these parties stand: The last Léger poll in Ontario had the NDP five points ahead of the Liberals, but more recent polls from Abacus Data, Innovative Research and Campaign Research all had the Liberals in front of the NDP by margins ranging from 3 to 14 points (See complete list of Ontario polls on this page). The 338Canada Ontario model now has both parties neck-and-neck just below the 30-per cent mark.

Interestingly, Mainstreet measured a narrowing, but still significant gender split in party support. Among male voters, Ford’s PC leads with 37 per cent, a comfortable 11-point margin over the Liberals. Among female voters, all three parties are deadlocked in a statistical tie, with the NDP holding a narrow three-point lead over both the PC and Liberals. Compared to Mainstreet’s previous Ontario poll, the PC has dropped 12 points among men and 8 points among women, while both the NDP and Liberals have gained ground in similar proportions with male and female voters.

Regionally, the Liberals and NDP are tied for first place in Toronto with 33 and 32 per cent respectively, while the PC takes third place with 24 per cent. In the GTA, the PC leads with 35 per cent, the Liberals stand close behind at 29 per cent, and the NDP sits in third place with 22 per cent. In Southwestern Ontario, we see a close race between the PC (34 per cent) and the NDP (32 per cent), while the Liberals are a distant third with 19 per cent. Obviously, we must use caution with regional subsamples due to their higher margin of error.

We add this latest poll to the 338Canada Ontario electoral model. Considering how close the three main parties currently stand and how volatile the results have been of late (from a five-point liberal lead from Innovative Research to an 8-point PC lead from Campaign Research in the past month alone), the seat projections contain high levels of uncertainty. These large confidence intervals are not a bug of the model, but a direct result of uncertain data, and of several projected three-way races across the province.

Doug Ford’s PC leads with an average of 54 projected seats, nine seats below the 63-seat threshold for a majority at Queen’s Park. As mentioned above, the bell shaped 95 per cent confidence interval of this seat projection is wide, ranging from the high 60s (in the plausible scenario where a Liberal and NDP vote-split gives virtually all three-way races to the PC) to the high 30s (should either the Liberals or NDP take most of these close races). Nevertheless, the PC is still be projected as the favourite to win the most seats if a general election were held this week.

The NDP and Liberals are statistically tied for second place with projected averages of 36 and 33 seats, respectively. However, while the NDP has a higher floor of seats than does the Liberal Party, the NDP’s ceiling is considerably lower than theLiberals’ (see right-ward confidence interval on the graph). In short, the NDP has more safe seats, but the Liberal Party is competitive in more ridings across the province. Testing different scenarios with the model, we see that adding or taking two or three points away from the NDP does not alter its seat projection much, but a similar swing for or against the Liberals completely flips the Liberal projection on its head, from the mid-teens in the worse case scenario to even winning a plurality of seats in the best case scenario.

The next general election in Ontario is scheduled for June 2022, so these numbers above do not constitute a prediction of the outcome, but rather a snapshot of the current landscape. Back in early March, the numbers indicated that Ford’s support was holding strong after one year of the pandemic, and the PC was projected as the favourite in a landslide (I even wrote that Ford was enjoying “unwavering support”). However, data released by several polling firms in the past month does confirm that the events of April and May have inarguably hurt Ford and the PC.

Yet, will Ontario voters change their view of their elected leaders once the province (and the country) is near-fully vaccinated? Will Ford manage to weather this latest storm and get back into majority territory once the economy (potentially) begins rolling at full speed in the fall? We do not know these answers, but they could certainly shape the year to come in Ontario politics.

Nevertheless, one hypothetical question that will undoubtedly come up as we near the 2022 Ontario campaign is as follows: What if the PC wins a plurality, but not a majority of seats at Queen’s Park next year as this projection indicates? Would Ford manage to win the confidence of the legislature? And, despite the obvious animosity between the Liberals and NDP, would those parties set aside their differences and agree on a temporary, if fragile, coalition to oust Ford?

Mainstreet Research conducted its poll on May 15-16, 2021, among a sample of 1,047 potential Ontario voters using IVR technology. This probabilistic poll has a margin of error of ±3 per cent, 19 times out of 20. You may find the full report and tables here.