Philippe J. Fournier: The PCs continue to fall further behind the Liberals, while a majority of Ontarians side with the teachers in the ongoing strike 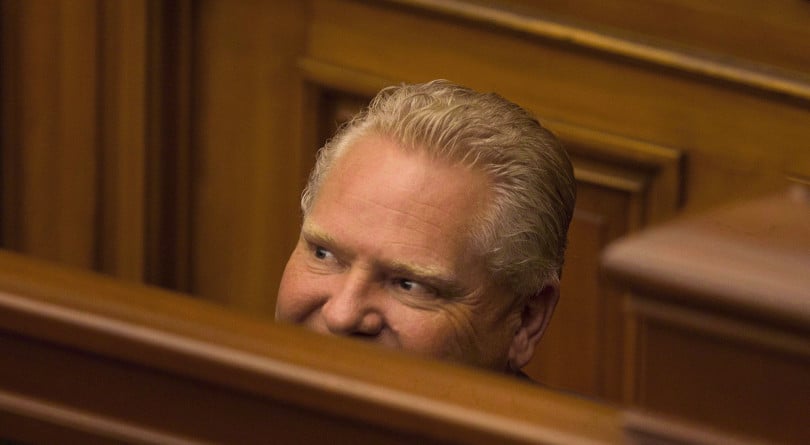 Ford attends a midnight session to debate a bill that would cut the size of Toronto city council, in Toronto on Sept. 17, 2018 (CP/Chris Young)

After last October’s federal election, Prime Minister Justin Trudeau went on a national tour to meet the country’s premiers in hope of mending fences. In late November, after a meeting with Doug Ford, many observers were caught by surprise by Ford’s candid demeanor. During the joint press conference, Ford spoke of national unity amid policy disagreements with the federal government, and, apparently, had left his characteristic confrontational attitude at the door.

Ford and other premiers had repeatedly attacked Trudeau’s Liberals on his handling of, among many files, the carbon tax (and even took the federal government to court—unsuccessfully—on the matter). But those attacks flew in both directions: During the federal campaign, Ford was a regular target of Trudeau’s rally speeches throughout Ontario. An anti-Ford Liberal strategy combined with a poor Ontario campaign from Andrew Scheer led Trudeau’s LPC to win 79 of the province’s 121 federal seats (only one fewer than in 2015).

As an Ontario teacher strike loomed over the horizon, and the prospect of having to deal with Trudeau for perhaps the remainder of his term, Ford probably believed it was time for a provincial-federal truce. Additionally, Ford’s PC party had been struggling in the polls of late, but had been at least tied with the Ontario Liberal Party (OLP): In December, EKOS Research Associates measured the OLP and PCPO in a statistical tie with 32 and 30 per cent, respectively.

However, in early January, Pollara published its latest Ontario numbers, which had the OLP four points ahead of Ford’s PCs (see complete list of Ontario polls on this page). This past week, EKOS released its own Ontario voting intentions, and the OLP, whose leadership race is still under way, has increased its lead to five points over the PCs: 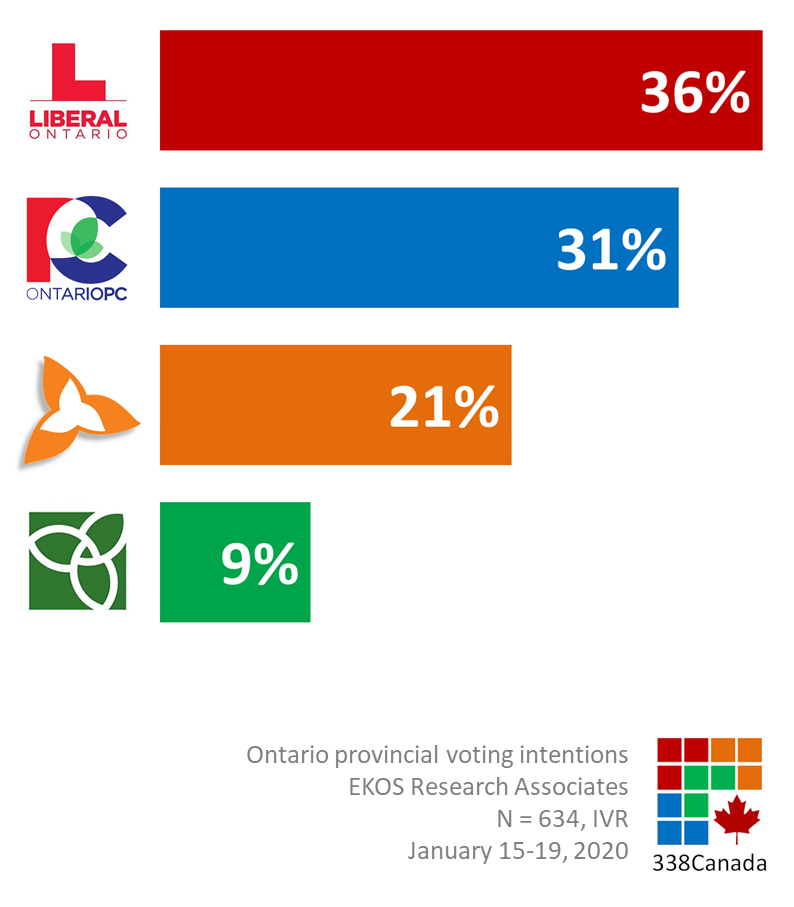 According to EKOS, the Ontario Liberals currently lead with 36 per cent, the PCs come second with 31 per cent (nine points below their 2018 election results), and the Ontario NDP falls to 21 per cent.

As mentioned above, Ford’s stagnating numbers come amid a province-wide teacher strike. As part of its latest poll, EKOS asked its respondents whether they sided with the teachers’ union or with the government in this labour dispute. Here are the results pulled from EKOS’ poll report: 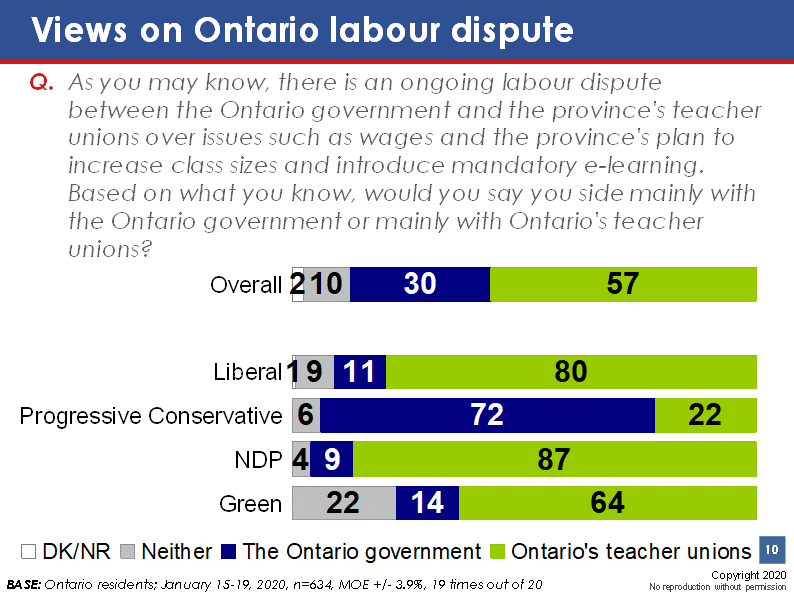 Unsurprisingly, these numbers mostly fall along partisan lines: 80 per cent of OLP and 87 per cent of ONDP supporters are siding with the teacher’s union. About seven out of 10 PC supporters side with the government.

Overall, 57 per cent of respondents sided with the province’s teachers, and 30 per cent with the PC government. Therefore, whether the compensating subsidies (up to $60 per day in some cases) Education Minister Stephen Lecce is offering parents whose children are affected by the strike will work at swaying public opinion is still up in the air. On Friday, Doug Ford warned that “there’s only so long my patience can last with the head of the unions”, stating however that back-to-work legislation was not in the works at this point.

Here is an interesting passage from EKOS’ poll report: “As in the federal numbers, the largest divide is across education […] At nearly 45 points, the Liberals win decisively with the university-educated. In contrast, the PCs, at 48 per cent, do exceptionally well with Ontario’s high school-educated cohort. Education, both as a policy and as a critical demographic divide, is emerging as one of the biggest fault lines in Canadian politics.”

A final note on the OLP: While it is always tricky for an opposition party to side with a union negotiating with the government, considering this same party could one day find itself across the table from said union, it’ll be interesting to see whether front runner Steven Del Duca and other OLP leadership candidates will try to showcase their support for the union’s demands—and with what intensity. (With the OLP leadership race entering its last stretch, Robert Benzie of the Toronto Star reported last week that Steven Del Duca is already well ahead in members running for delegate positions. If the numbers stated are close to reality, Del Duca could be elected OLP leader after a single round of voting.)

CORRECTION, Jan. 27, 2020: An earlier version of this story incorrectly stated that Steven Del Duca leads the Ontario Liberal leadership race by delegate count. He is ahead among those running to be delegates.