Philippe J. Fournier: The latest projections suggest the CAQ would easily surpass its already commanding majority if an election were held 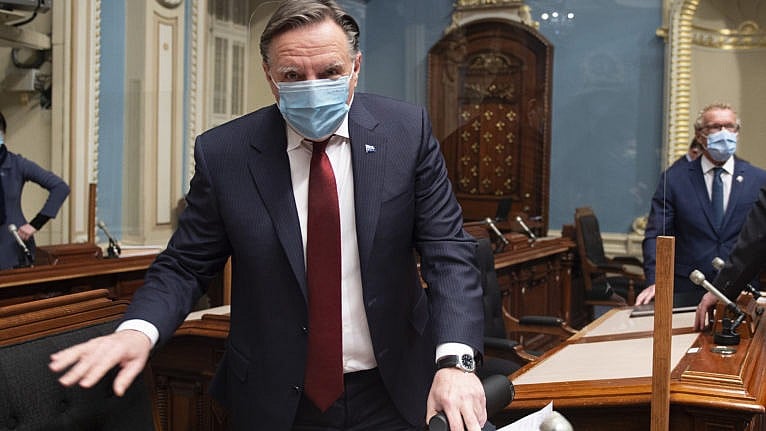 Even though the Quebec government has implemented the strictest confinement measures in the country in the hopes of slowing COVID-19, government satisfaction in Quebec remains as high as ever, according to myriad polls taken in the past months. The newest restrictions implemented in January, such as the closure of non-essential businesses and imposition of a province-wide 8 p.m. curfew, do not appear to have put a dent in François Legault’s CAQ support, according to a new poll from Mainstreet Research commissioned by 338Canada.

Among decided and leaning voters, the governing CAQ receives 48 per cent of voting intentions, a crushing 27-point lead over its closest rival, the Quebec Liberals. These new numbers remain consistent with most Quebec polls on the field throughout 2020, and restate clearly that Legault sits comfortably in the driver seat of Quebec politics:

The CAQ leads by similar proportions with both male and female voters, and remains first among all age groups, including voters aged 65 and over, with whom it holds a commanding 37-point lead over the Liberals.

Moreover, among francophone voters who make up close to 80 per cent of the Quebec electorate, the CAQ leads by 40 points over the second-place Parti québécois (54 to 14 per cent). The Quebec Liberals are dead last in this key demographic, with only 11 per cent.

A quick glance at all Quebec polls since 2018 shows the Quebec Liberals have not recovered from their 2018 electoral defeat. They current sit at 21 per cent across the province, four points below their disastrous 2018 result. While the QLP still leads on the Island of Montreal, its trails the CAQ by 30 points in the Montreal suburbs (the “450” area); by 40 points in the Quebec City metropolitan area; and by 50 points (!) in the regions of Quebec. With such levels of support, the Liberals appear stuck within the confines of Montreal with little hope of winning more than a handful of districts in the rest of the province.

The Parti Québécois and left-wing Québec solidaire stand in a statistical tie with 11 and 12 per cent, respectively. For QS, after winning 10 seats and 16 per cent of the vote in 2018, it appears the party’s growth has hit a wall. For now at least, the party remains competitive only in its Montreal Island strongholds, as well as its ridings of Taschereau (downtown Quebec City) and Sherbrooke.

The Parti Québécois will find little solace with the results of this poll. Last fall, after PQ members elected a new leader, Paul St-Pierre-Plamondon, both the Angus Reid Institute and Léger measured PQ support at a paltry 14 per cent across Quebec. Mainstreet’s new poll indicates Plamondon’s leadership has yet to have a positive effect on the party’s standing. The PQ is dead last among the 18-34 year old demographics with only 12 per cent support, and its baby boomer base seems to have almost entirely migrated to the CAQ: Among voters aged 65 and over, the CAQ leads the PQ by a crushing 45 points (58 to 13 per cent).

We’ve added this poll to the 338Canada Quebec model and updated the province’s seat projection. According to this updated data, the CAQ stands head and shoulders above its rivals, with an average of 90 seats (out of 125 seats in the Quebec National Assembly), a comfortable 27-seat cushion above the threshold for a majority (63). Unsurprisingly, in 100,000 simulations performed by the 338Canada model, the CAQ wins a majority of seats in every single one:

The CAQ’s dominance is due not only to its high level of support, but also to the simple fact that its voters are spread throughout the province. Taken together, dominating the Montreal suburbs and Quebec City alone could be enough to form government (a minority at least), but the CAQ has taken root in all other regions of Quebec, with projected sweeps of Mauricie, Saguenay-Lac-St-Jean, Abitibi and Eastern Townships regions (although Sherbrooke remains a toss up between Québec solidaire and the CAQ).

Here is the current seat probability density for the CAQ. Even in the worst case scenarios, in the 95 per cent confidence interval, the CAQ would win more than its 74-seat result from the 2018 general election:

The Quebec Liberals win 23 seats on average, including 17 on the Island of Montreal. Québec solidaire is projected at an average of 8 seats and the PQ, only four.

In the last three Quebec provincial elections, three different parties—which competed in all three elections—came out on top: the Parti Québécois in 2012, the Quebec Liberals in 2014, and the CAQ in 2018. Quebec voters had also shown high volatility on the federal scene, giving a majority of the province’s federal seats to the Bloc Québécois in 2008, to the NDP in 2011, and to the Liberals in 2015.

In short, Quebec politicians can never take any gains for granted. Nevertheless, the CAQ’s massive lead on the provincial front is one no Quebec party has enjoyed since the return of Robert Bourassa in the mid-1980s, and a scenario where the CAQ blows this lead and loses re-election in 2022 seems almost unfathomable. Still, 19 months is a long time in politics, moreso during a pandemic and a looming economic crisis. So, naturally, we are not calling this election quite yet (far from it, in fact).

Many observers outside Quebec may be dumbfounded to explain how the government of a province which accounts for the highest numbers of COVID-19 infections and fatalities could enjoy such wide and lasting support. They may wonder whether Legault could actually walk on water across the St. Lawrence River. Yet, over and over since the pandemic reached Canada’s borders, public opinion data shows that Legault’s effective communication skills and perceived steady hand at the wheel may be just what most Quebec voters need at the moment.

For the complete numbers of this Quebec projection, visit the 338Canada Quebec page. The Mainstreet Research Quebec poll was on the field February 8-9, 2021, and collected data via automated calls (IVR) from 1,012 potential Quebec voters. The poll sample is probabilistic and has a margin of error of ±3%, 19 times out of 20. The poll was commissioned by 338Canada / Qc125. Read Mainstreet’s full report here.