Philippe J. Fournier: John Horgan's election gamble appears to be paying off, with a new Mainstreet poll showing an NDP majority and the Liberals in trouble 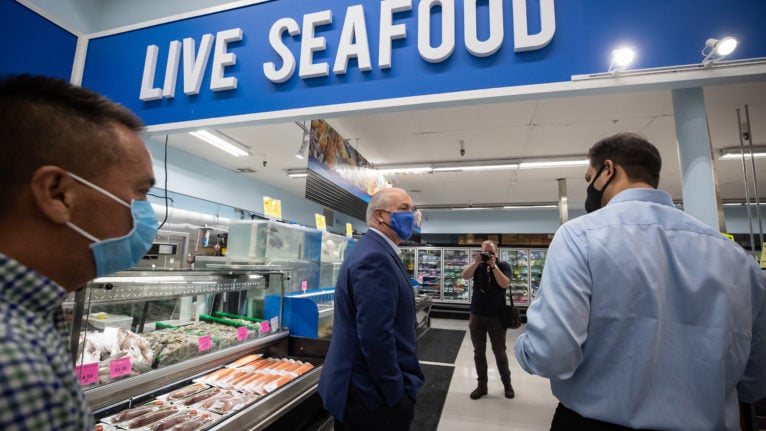 Horgan is given a tour of a supermarket at a campaign stop in Vancouver on Oct. 1, 2020 (CP/Darryl Dyck)

Only three weeks remain in the British Columbia election campaign, and it appears thus far that John Horgan’s NDP may find itself on the winning side of this pandemic-election gamble to secure a majority at the B.C Legislative Assembly.

We publish today a new British Columbia poll from Mainstreet Research that confirms this trend and shows that, although the election call itself may not have been popular in B.C., many voters do not appear to recoil from Horgan and his team because of their decision to call a snap election. The poll was commissioned by 338Canada.

To the question: “If the provincial election were held today, which party would you vote for?”, here are the results from all respondents:

The NDP leads with 39 per cent of respondents, 10 points in front of the B.C. Liberals. The Green Party, which has fewer than 40 confirmed candidates as of this writing (nominations end later today according to Elections BC), remain a distant third with 13 per cent. Of all respondents polled, 15 per cent say they are undecided.

Among decided voters, the NDP receives 45 per cent support, which should—theoretically—be enough for John Horgan to win his coveted majority:

Regionally, the NDP leads by 12 points in Metro Vancouver and by crushing 30-points on Vancouver Island. In the rest of B.C., Mainstreet measures a statistical tie between the main parties: 38 per cent for the Liberals, 36 per cent for the NDP. However, we do urge caution with regional sub-samples because the margin of error increases as the sample size decreases.

We add this newest poll to the 338Canada British Columbia model with other recent B.C. surveys published since the writ was drawn up (see all B.C. polls here), and project the NDP winning an average of 55 seats:

The B.C. Liberals win an average of 30 seats according to this projection. The threshold for a majority in Victoria is 44 seats. In the 2017 general election, the Liberals won 43 seats and the NDP 41 seats. The balance of power went to the Greens, which won the three remaining seats in the legislature.

Here are the seat projection probability densities: the higher the bars, the more likely the outcome. We notice on the graph below that the Liberals and NDP curves barely overlap. In fact, according to these numbers, the odds of a near-tie in the seat count are similar to those of an NDP rout (65+ seats).

In short, the B.C. Liberals are in trouble. Over the 100,000 general election simulations performed by the model, the NDP wins 96 per cent of the time (or 24 out of every 25 simulations), including a majority of seats in 94 per cent of simulations:

Of course, many things may happen in the span of three weeks and, for those who remember the 2013 B.C. election, we know that polls could be off by a handful of points. Nevertheless, considering the high satisfaction levels of John Horgan’s handling of the pandemic (as measured weekly by Léger since April), such a polling error seems highly unlikely at the moment. To wit, in the latest Léger poll released on Tuesday, 80 per cent of British Columbia voters remain satisfied with Horgan’ handling of the pandemic, the highest among all premiers in Canada.

We will continue to follow the race in British Columbia all the way to election day on Oct. 24. For the complete numbers of this British Columbia projection, including district-level projections, visit the 338Canada B.C. page. The interactive map of this projection may be found here.

The poll was conducted by Mainstreet Research and commissioned by 338Canada. It was in the field from Sept. 26 to 29, 2020, and collected data from 1,041 British Columbia voters. The margin of error is ±3 per cent, 19 times out of 20. Mainstreet’s full poll report may be found here.