Philippe J. Fournier: The CAQ's current dominance—in virtually every demographic segment of the electorate—has no recent precedent in Quebec 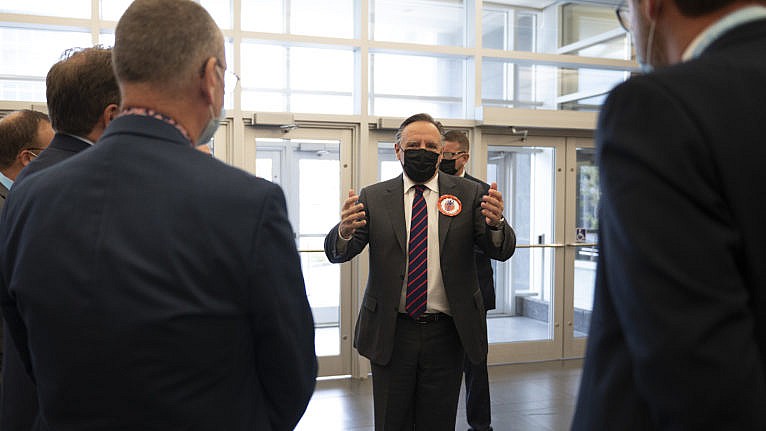 Legault arrives to speak at the opening the the Federation Quebecois des Municipalite's annual congress on Sept. 30, 2021 in Quebec City (Jacques Boissinot/CP)

We are less than a year away from the next Quebec general election and, according to recent polling data, never in the past 30 years has a re-election seemed so likely in the province. Barring a historic turn of events or a major scandal, it appears no other political party is positioned to unseat François Legault’s CAQ.

Indeed, the latest Quebec poll conducted by Leger for Le Journal de Montréal measures the CAQ at 47 per cent of  voting intentions in Quebec, a monstrous 27-point lead over its closest rival, the Quebec Liberal Party (QLP). In distant third place are Québec solidaire (QS) and the Parti québécois (PQ) with 11 per cent support apiece, while a new fifth player, Éric Duhaime’s Conservative Party (akin to Maxime Bernier’s PPC at the provincial level), climbs to 8 per cent in the province, with support mostly concentrated in the Quebec City region.

The CAQ dominates virtually all demographic segments of the Quebec electorate. The CAQ leads by 29 points among men and 24 points among women. And while there is a statistical tie between the CAQ (28 per cent) and QS (26 per cent) among young voters aged 18-34, the CAQ crushes its rivals among older voters, with leads of 30 points among those aged 35-54 and 35 points (!) among those aged 55 and over.

In the Montreal metropolitan area (Island of Montreal, Laval and “the 450”), the CAQ stands 41 per cent support, compared with 28 per cent for the QLP. In the Quebec City region, the CAQ dominates with 53 per cent support, 35 points ahead of Éric Duhaime’s Conservatives, which stands in second place with 18 per cent in the region. In the rest of Quebec, the CAQ obtains 52 per cent, nearly 40 points ahead of its rivals.

What explains the CAQ’s current dominance? One of the questions frequently asked in such surveys measures satisfaction with the government. Such data can tell us something about the potential for growth (or decline!) of the competing parties. With 65 per cent of respondents saying they are satisfied with the CAQ government, François Legault enjoys a degree of consensus that goes well beyond partisan lines. Consider the following figure:

Not only does the CAQ enjoy near-unanimity among its own voters (97 per cent satisfaction), but seven in 10 PQ voters (69 per cent) say they are satisfied with the CAQ government. Even among voters of the other opposition parties, the CAQ scores exceptionally well: 44 per cent of Liberal voters and 41 per cent of QS voters say they are satisfied with the government’s performance.

Moreover, François Legault is seen as the best candidate for the position of Premier of Quebec among all party leaders, and by far. Consider the following table (taken directly from the Léger report):

Bad news for the Liberal Party: when asked which party leader would make the best premier, only 45 per cent of Liberal voters pick QLP leader Dominique Anglade. Even worse news for PQ leader Paul St-Pierre-Plamondon: only 25 per cent of PQ voters believe that he is the best candidate for premier. In fact, PQ voters even prefer François Legault (38 per cent) to the current PQ leader (25 per cent). I am scouring my memory and cannot recall a recent occasion when voters of a major party in Quebec preferred the leader of another party to their own. In fact, Paul St-Pierre-Plamondon (3 per cent) is even behind neophyte Éric Duhaime (6 per cent) in this survey.

Obviously, such a dominance in voting intentions also translates into a strong lead in the seat projections. According to the 338Canada Quebec model, the CAQ would win an average of 100 seats in the National Assembly if an election were held this week, or 24 more seats than it currently holds.

The QLP would be reduced to an average of only 18 seats in the ridings where many anglophone and allophone voters reside in Montreal, Laval, Montérégie, and the Outaouais regions. Moreover, the CAQ’s lead among francophones is such that some traditional Liberal ridings in Montreal could potentially flip, including Anjou-Louis-Riel, Verdun, Maurice-Richard, and Marquette.

Québec solidaire would probably manage to keep its core of Montreal seats, but ridings such as Sherbrooke, Jean-Lesage and Rouyn-Noranda-Témiscamingue, all won by QS in the 2018 election, could be at risk. In addition, the CAQ’s growing support in Montreal’s French-speaking boroughs, combined with the PQ’s fall from grace on the island, could mean that even Rosemont may be in play next year.

As for the Parti Québécois, it would be left with Pascal Bérubé’s (former PQ interim leader) riding of Matane-Matapédia in the Bas-Saint-Laurent region (Lower Saint-Lawrence). However, the PQ remains competitive in other ridings which the party already holds, including Joliette, Gaspé and Îles-de-la-Madeleine.

In fact, the 338Canada model has the CAQ projected with no fewer than 74 “safe” ridings (ridings with a 99.5 per cent or greater odds of winning). The CAQ thus has a pool of safe ridings higher than the threshold for a majority in the National Assembly, i.e. 63 seats.

So who could stop the CAQ in 2022? Could the numbers we are seeing now be tipped in favour of one of the opposition parties in less than a calendar year? One should never say never in Quebec politics, but the CAQ’s current dominance has no recent precedent in Quebec. One has to go back to Robert Bourassa’s Liberals in the mid-1980s to find similar numbers. After winning 99 seats in 1985, the QLP was easily re-elected with 92 seats in 1989. Moreover, the QLP had only one serious opponent in that election (Jacques Parizeau’s Parti Québécois), whereas today the CAQ faces a highly divided opposition, giving the CAQ a clear advantage in terms of seats.

At the risk of having to swallow these words in a few months, it seems that the worst of the pandemic is behind us and that Quebec has withstood the worst of the fourth wave that hit the Canadian Prairies hard. Economic recovery will likely dominate the government’s agenda in 2022, which, in theory, should play right into François Legault’s hands. So what could stop the CAQ? Considering that complacency and arrogance can arise when a government feels a little too comfortable, perhaps the CAQ will be its own worst enemy in this upcoming election year.

Details of this projection are available on the 338Canada Quebec page. You will find all 125 electoral district projections here, or use the regional links below: