338Canada: Our patience is wearing thin

Philippe J. Fournier: As the third wave of the pandemic has taken hold, satisfaction with political leadership is on the decline outside of Atlantic Canada and Quebec 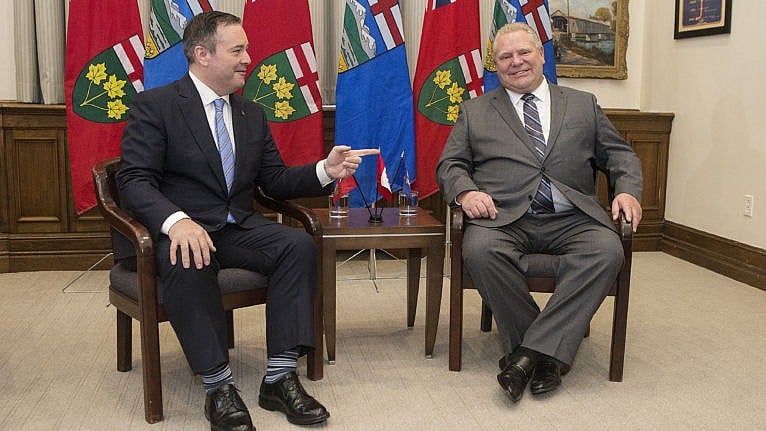 Ford poses with Kenney at the Ontario Legislature in Toronto on May 3, 2019 (CP/Chris Young)

Opinion polls show the patience of Canadians towards their elected officials is growing thin. Although some leaders in this country are faring better than others, the overall tendency of the past months is crystal clear: Satisfaction of the handling of the pandemic is trending downward virtually everywhere, according to the bi-weekly Léger tracker for The Canadian Press.

Let us start with satisfaction towards the federal government. While roughly two-thirds of respondents claimed to be satisfied with Justin Trudeau’s Liberals back in the fall of 2020, the latest numbers show a statistical tie between satisfied (49 per cent) and dissatisfied (47 per cent) voters. Yet, outside of Atlantic Canada (65 per cent satisfied), the data shows only modest regional contrast between most satisfied (Québec and the Prairie provinces at 51 per cent) and least satisfied. As is often the case, it is in Alberta where the poll measures the highest dissatisfaction towards Ottawa: 44 per cent satisfied and 52 per cent dissatisfied.

Perhaps it is a direct consequence of the how intense this third wave of virus has hit certain parts of the country. Léger measures significant contrasts in satisfaction towards provincial governments. Once again Atlantic Canada comes out on top with 79 per cent satisfaction on average (Atlantic provinces are merged together in these polls because their individual sample size would make the data not statistically relevant). West of Fredericton, only Quebec and British Columbia show net positive numbers for their handling of the pandemic this week:

At the bottom of this list are the conservative governments of Alberta, Ontario, Manitoba and Saskatchewan.

Let us take a closer look at the progression of satisfaction ratings for premiers of the four most populous provinces.

The case of Doug Ford is especially intriguing. Before the pandemic reached our borders, the numbers clearly showed Ford was a polarizing and unpopular premier, with approval ratings stagnating in the low to mid-30s. Then, as COVID-19 infections started spreading in the spring of 2020, polls indicated many Ontarians rallied around the leader, and Ford’s approval numbers skyrocketed. While his approval remained high throughout Year One of the pandemic, Ford’s numbers showed a gradual decline throughout the fall and winter, but still with scores still above 50 per cent mark:

[On the graph below and above, the dots indicate the poll results; the shaded areas depict simple rolling averages.]

But then, just as the province saw a dramatic spike in cases in early April and was forced to go back to another lockdown, the wheels came off for Ford. The premier’s misguided decision to forbid several outdoor activities deemed low-risk by public health experts was clearly not well received by many Ontario voters: Ford’s approval fell by 17 points in the span of two weeks, and the latest numbers show he has not yet recovered. (Ford later walked back some of these measures and offered a tearful apology.)

François Legault remains once again near the top of the list with 70 per cent of Quebecers satisfied with his handling of the pandemic. While most of Quebec is still to this day under the strictest restrictions in the country (here in Montreal, we have been almost a full three months under an 8 p.m. curfew), Legault continues to be among the most appreciated premiers in the country. Legault’s handling of the pandemic has not been without bumps on the road, but the very fact that his satisfaction rating still hangs in the high 60s and low 70s one full year into the pandemic is testament to his and his team’s communication skills (and to a weak opposition at the National Assembly, but more on this in a future column).

British Columbia Premier John Horgan is one of three premiers in Canada who took his party from minority rule to a majority during the pandemic. Horgan’s numbers have remained high throughout 2020 (often only second to Legault). In July, Horgan’s approval was a stunning 87 per cent. Just after his re-election in October, 72 per cent of B.C. voters approved of his handling of the pandemic. The numbers have been slowly slipping since, but still a majority of British Columbians (55 per cent) approve of his work according to Léger’s latest tracker:

In Alberta, although Jason Kenney’s approval numbers hung around those of fellow premiers for the first months of the pandemic, many Alberta voters have soured to his premiership since. In fact, Rachel Notley’s NDP has even led Kenney’s UCP in every opinion poll in Alberta since December (see full list here).

As for Albertans’ satisfaction of his handling of the pandemic, Kenney has found himself near or at the bottom of the premier list on several occasions since December, with a satisfaction rating hovering near the 30-per cent mark. After a modest recovery in March, his score fell back down and now sits at 30 per cent approval.

However, unlike other provinces in Canada, dissatisfaction with Alberta’s provincial government comes from all sides of the political spectrum. According to the latest numbers from the Angus Reid Institute, 45 per cent of Alberta voters believe the current restrictions “go too far”, and 42 per cent believe they “don’t go far enough”. Only 12 per cent Albertans believe the restrictions are just right.

Nevertheless, vaccination is picking up speed in Canada. Infection rates among the vaccinated population remains incredibly low, so there is ample empiric evidence that the vaccines, so far, do work. By summer, it is not unlikely that polls will study the opinion of Canadians not on their leaders’ handling of the pandemic, but on their post-COVID recovery plan.