The B.C. election at the starting line: 338Canada projection

Philippe J. Fournier: The NDP begins the campaign comfortably in majority territory with an average of 55 seats, while the Liberals face an uphill battle 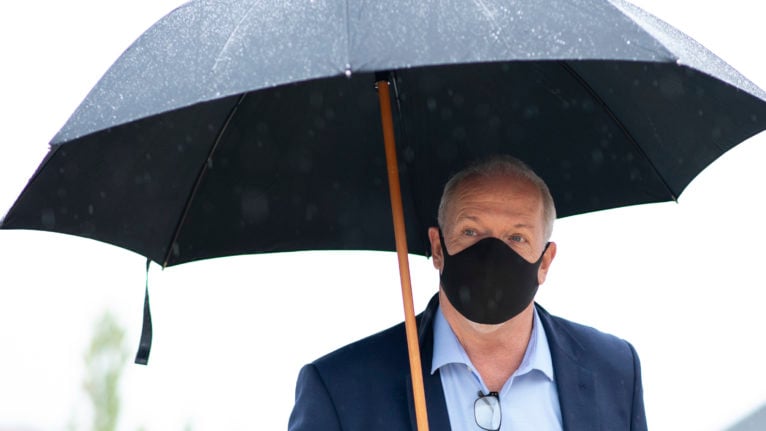 Opposition parties in British Columbia will grudgingly tell you—and many B.C. voters will agree—that it did not have to come to this. The current legislature in Victoria was going to blow its fourth candle next spring, and the province’s fixed-date election law, which had been amended by the NDP-Green coalition in 2017, had set the next provincial election for October 2021. Alas, the siren call of possibly governing a majority at the B.C. Legislative Assembly was too tempting to resist for the B.C. NDP. And so British Columbians will head to the polls one year early, on Oct. 24, 2020.

Since the 2001 Liberal blowout (a victory by a 36-point margin province-wide and a stunning 77 of 79 seats for the B.C. Liberals), every provincial election in British Columbia has been highly competitive, with the Liberals never winning the popular vote by a margin greater than five points: Liberals by 4.3 points in 2005, by 3.6 points 2009, by 4.4 points in 2013, and by 0.08 point in 2017 (there were fewer than 2,000 votes between the main parties in 2017). However, opinion polls in B.C. since the COVID-19 pandemic hit Canada last spring have measured a significant uptick in support for John Horgan’s party. According to current data, the NDP could potentially win its first majority in Victoria since 1996 (and could win the popular vote for the first time since… 1991!).

No horse race poll has yet been published since the campaign began earlier this week, so we publish this starting-line electoral projection with the little data that’s been made available in the spring and summer. All B.C. polls are listed on this page with links to each poll’s full report.

Here are the popular vote projections at the starting line: The B.C. NDP leads the field with an average of 45 per cent support. The B.C. Liberals stand in second place with 34 per cent. Since data has been scarce of late, the confidence intervals of those projections remain wide for both main parties: For the NDP, the projection stretches from the high 30s to the low 50s; For the Liberals, the worst-case numbers are just below the 30 per cent mark, and the best case stretches to just under 40 per cent of support.

It is important to state that this is a feature of the model, not a bug: When polls start to come in (presumably next week), those confidence intervals should shrink significantly (unless poll are all over the place, but let’s not fret over this for now).

The Greens stand in third place at 15 per cent on average (they won close to 17 per cent of the popular vote in 2017), and we will keep a close eye on how they fare in this election, since past Greens voters could very well play king makers in this election.

Finally, the B.C. Conservatives are averaging 6 per cent support. However, this level of support is based on the Conservatives running a full slate of candidates, which could be a challenge for this party. We will adjust these numbers depending on how many candidates the party actually run (Conservatives ran 10 candidates and won 0.53 per cent of the vote in 2017).

Seat-wise, the NDP begins this election campaign comfortably in majority territory with an average of 55 seats (the threshold for a majority in Victoria is 44 seats).

Regionally, the NDP dominates Metro Vancouver (22 seats to 6 for the Liberals on average). The NDP is also leading by double-digits on Vancouver Island and the Pacific Coast, where a near-sweep of the region is entirely plausible. At dissolution, the NDP held 12 of 16 seats in the region.

The Liberals win an average of 30 ridings in this projection. However, the Liberals remain competitive in more than 40 districts, and may enjoy a slight edge in vote efficiency over the NDP. As of this writing, the Liberals are projected leading by significant margins in the Okanagan Valley/Rockies region, as well as in Northern B.C.

Here are the seat projection bell curves for both parties (the higher the bars, the likelier the outcome). As you can see, according these probability distributions, the odds of a NDP blowout (over 65 seats) are similar to that of a near-tie between the two parties.

As it currently stands, the NDP has 43 electoral districts labelled as either “safe” or “likely” by the 338Canada model, while the Liberals hold only 20. If they hope to turn things around in the next four weeks, the Liberals will have to secure nearly all “leaning” and “toss up” districts:

There are currently 12 toss up districts. They are the following:

We will keep a close eye on these electoral districts as we approach election day.

In conclusion, it should come as no surprise that the B.C. NDP are projected as heavy favourites at the starting line of this campaign: Among the 50,000 general election simulations performed by the 338Canada model, the NDP won the most seats in 96 per cent of all simulations. The B.C. Liberals’ odds of winning the most seats are currently less than 3 per cent, or about one in 40 simulations.

Still, we stand one full month away from voting day, and we know from recent elections that a lot can occur during a campaign. This projection is by no means a prediction of next month’s election results—just a broad picture of the current landscape 30 days away from election day.

More than 5,000 kilometers away, New Brunswick Premier Blaine Higgs took a major gamble in August asking the province’s lieutenant governor to dissolve the legislature prematurely, hoping recent favourable poll numbers could bring his party over the majority threshold in Fredericton. On Sept. 14, Higgs won his coveted majority. Let’s see if B.C. voters will hand the keys of the legislature to John Horgan and his team for a full majority mandate. Here at 338 HQ, we will follow the numbers all to the way to election day.

For details on this projection, visit the 338Canada B.C. page. Numbers will be updated regularly throughout the campaign. For details on 338Canada’s methodology, visit this page. For 338Canada’s full record over past general elections, click here.