Philippe J. Fournier: The CAQ is in landslide territory despite the province's severe outbreak—and Quebecers are feeling as good as ever about being Canadian 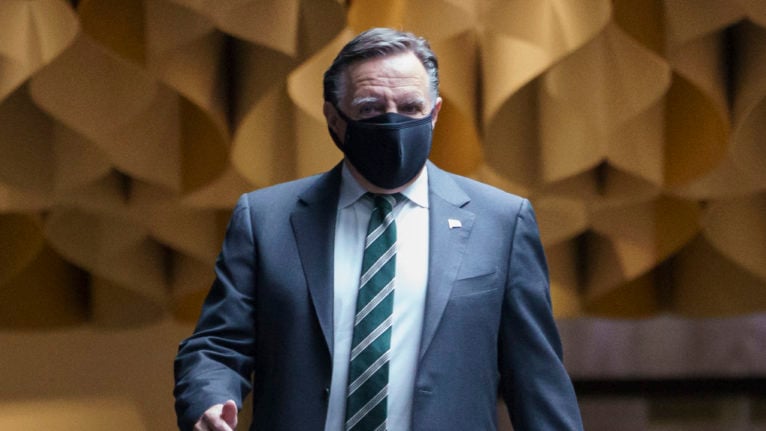 When COVID-19 started spreading in Canada in early March, Quebec Premier François Legault began giving daily press conferences to update Quebecers on the state of the pandemic in the province. Much like Justin Trudeau’s daily 11 a.m. briefings from outside Rideau Cottage, Legault’s daily 1 p.m. updates became must-see television and were broadcast live by every major news outlet in the province.

Without a shred of doubt, this PR exercise by Legault and a handful of his ministers worked impeccably. Even though Quebec tallied nearly half of all COVID-19 infections in Canada (and suffered the highest death toll), Legault’s reassuring words and figurative steady hand at the wheel made him the most popular premier in Canada (in the eyes of his own constituents), according to numerous polls from several polling firms. In fact, consecutive Léger polls in the spring had satisfaction of Legault’s handling of the pandemic well above 90 per cent—transcending partisan lines in Quebec.

Although satisfaction levels have receded somewhat, in the latest Léger poll published last week, four out of five Quebecers still approved of Legault’s handling of the lockdown and gradual reopening of the province. The same poll had Legault’s CAQ at a stunning 51 per cent in voting intentions, almost 30 points ahead of the Quebec Liberals, and 37 points above the sinking ship that is the Parti Québécois, Legault’s former party.

On Friday, EKOS released its latest Quebec numbers which put the CAQ at 59 per cent province-wide, and at 64 per cent among Francophones. The Quebec Liberals were a distant second, 40 points behind the CAQ, while both the Parti Québécois and left-wing Quebec Solidaire stood below the 10 per cent mark.

We add these new polls to the 338Canada/Qc125 model and present this updated Quebec projection. Also taken into consideration were the latest Quebec numbers from the Angus Reid Institute and Innovative Research. A list of all Quebec polls is available on this page.

Unsurprisingly, the model has the CAQ leading its rivals by a wide margin. The current CAQ average is 52 per cent, 28 points ahead of the Liberals’ 24 per cent. Never since the return of Robert Bourassa in the mid-1980s have we measured such a lead for any political party in Quebec. Here are the popular vote projections compared to the latest Quebec poll results:

Using past elections results, and breaking down these numbers by region and demographic profiles, the CAQ wins a stunning average of 100 seats in the 50,000 general election simulations performed by the model. This dazzling result is way beyond the CAQ’s current seat count of 76 in the 125-seat National Assembly (whose majority threshold is 63 seats):

The Quebec Liberals would be reduced to their Montreal strongholds and a lone riding in the Outaouais region. Quebec Solidaire, after its 2018 breakthrough when it went from three to 10 seats in the province, would be projected to lose its three seats outside of Montreal, and would only be favoured in five neighbouring ridings on the Island of Montreal.

As for the Parti Québécois, it would be a near-complete wipe out with an average of only two seats.

After more than four decades of internal strife about the future of Quebec inside or outside of Canada, these numbers clearly show that most francophone Quebecers have—at least temporarily—tuned out from the federalist-sovereigntist debate, choosing instead a nationalist coalition former péquistes and liberals (as well as few alumni from Mario Dumont’s ADQ). After a slow start to its political life—finishing in third place in both the 2012 and 2014 elections—Legault’s bold experiment appears to have captured the imagination of most Quebecers who, while defining themselves as Québécois first, also consider themselves Canadians.

Here was the regional breakdown of the results:

While some will notice that Canadian pride is lowest in Quebec with 80 per cent, Jean-Marc Léger himself noted this was the highest level for Quebec since his firm began polling this question 35 years ago.

I for one did not think I would see the day when Quebec politics is less competitive than Alberta’s, but here we are. Times, they are a changin’.

* * *
The complete 338Canada electoral projection for Quebec is available “here in English and here in French (Qc125).