Philippe J. Fournier: A new Mainstreet poll has the PCs leading in every age group and Ford's approval numbers over his handling of the pandemic still riding high 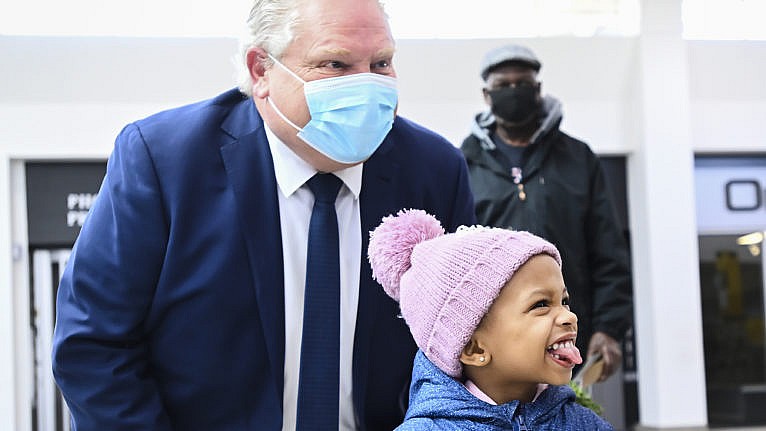 Ford poses for a photograph as he tours the Wellfort Community Health Services in Mississauga, Ont., on Feb. 9, 2021 (CP/Nathan Denette)

New Ontario polling data released by Mainstreet Research shows Doug Ford’s Progressive Conservative Party still holds a commanding lead in voting intentions in the province. Not only has the PC Party increased its province-wide support compared to the 2018 election results, but it still greatly benefits from a deeply divided opposition at Queen’s Park.

According to Mainstreet’s latest numbers, the PCs have the support of 43 per cent of Ontario voters (decided and leaning respondents), 18 points clear of their closest rival. The Ontario Liberals come second with 25 per cent, and the Ontario NDP stands not far behind with 22 per cent. Taking into account the poll’s margin of error, the Liberals and NDP should be considered in a statistical tie. Mike Schreiner’s Green Party is fourth with the support of 7 per cent of respondents:

Breaking down the poll’s results by demographic and regional subsamples, this new data indicates that the PCs have no visible weak spot: The party leads its main rivals among both male and female voters, and is ahead by double-digits in every age group—including a 20-point lead with voters aged 50-64, and a 24-point lead with the 65+ demographic. Additionally, Ford is either statistically tied or ahead in every polling region of Ontario, and enjoys a crushing 26-point lead in the seat-rich 905 region.

Even more troublesome for opposition parties is that Ford’s personal approval numbers remain at much higher levels than before the pandemic arrived at our borders last March. Still using Mainstreet’s latest poll, 46 per cent of Ontario voters believe the premier “has done a good job at managing the COVID-19 pandemic”. Last week’s Léger tracker indicated that 58 per cent of Ontario voters claim to be satisfied with Ford’s handling of the pandemic. That figure from Léger is down significantly from a summer-high of 85 per cent, but still higher than the PCs’ current standings.

Here is every publicly available Ontario poll since January 2020 (see complete list here). After an uncertain 2020 winter when all three main parties were within range of each other (and when the Liberals elected Steven Del Duca as leader), Ford’s party widened its lead starting in the summer of 2020 and has not looked back since:

In 2018, the PCs won 76 seats with 40.5 per cent of vote—a margin of 7 points ahead of the NDP. Naturally, considering the PCs have actually grown their support since, and that the NDP and Liberals both share almost equally the centre / left-of-centre vote, the current seat projection heavily tilts towards the PCs. According to the 338Canada Ontario model, the PCs would win an average of 84 of the legislature’s 124 electoral districts—21 ridings above the threshold for a majority:

No doubt this seat projection will give nightmares to proponents of electoral reform (and opponents of First-Past-the-Post). With a projected share of the popular vote just under 45 per cent, the Progressive Conservatives are projected to win just over two-thirds of the province’s ridings.

As we can see on the projection map below, Ford’s party sweeps much of southern Ontario. The Liberals and NDP are left sharing a fraction of the province’s urban seats, notably parts of the 416, Ottawa, Hamilton, London and Windsor:

The Ontario NDP, winners of 40 electoral districts in 2018, are projected to win an average of only 23 seats, seven of which are located in Northern Ontario. As for the Ontario Liberals, the party has clearly not recovered from its 2018 defeat when it was reduced to a mere seven seats. This updated projection has the Liberals winning 16 seats on average—an improvement for sure, but nowhere close to being competitive with the PCs.

Here are the seat projection probability densities: Even the projection’s worst-case scenarios for the PC Party give it enough seats to win either a majority or a strong minority:

As for the NDP and Liberals, both parties hit a hard wall just under the 40-seat mark, a ceiling much below where either party needs to be competitive.

As it currently stands, the PCs can bank on 42 “safe” (>99 per cent odds of winning) and 25 “likely” (>90 per cent) seats, which gives Ford a comfortable cushion of 67 seats—above the 63-seat threshold for a majority:

The scheduled 2022 Ontario election is 16 months away. While this can be a very long time in politics—especially in a period with so much uncertainty—Ford’s current lead appears to be rock-solid with an important faction of Ontario voters. Only a major (and historic) reversal of fortunes could turn the tide, even if anti-Ford voters decide to unite under a single banner (which is highly unlikely). With both the Liberals and NDP enjoying roughly similar levels of support, the PCs could cruise to a second majority in next year’s election.