Philippe J. Fournier: With the Ontario NDP and Liberals at near-identical levels of support, neither has a realistic chance of making substantial seat gains from the PCs 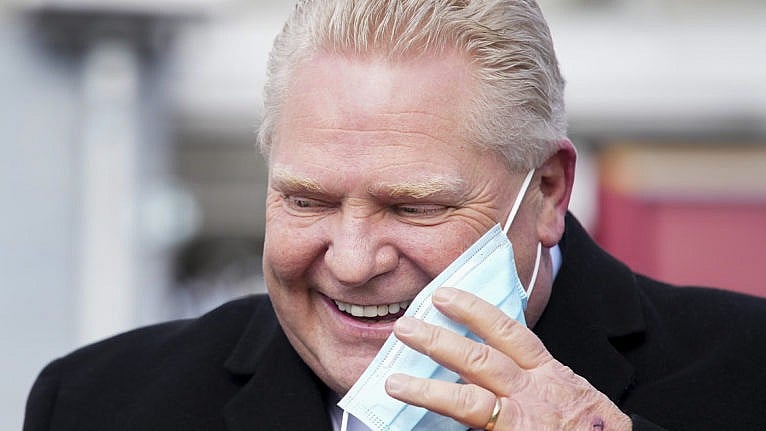 Ford makes an announcement at the Runnymede Healthcare Centre in Toronto on March 3, 2022 (Nathan Denette/CP)

The Ottawa convoy and Detroit-Windsor border blockades have come and gone, and through it all it appears Premier Doug Ford’s levels of support have gone mostly unscathed, according to the latest Ontario poll from Léger.

Fielded last week for Postmedia newspapers, the poll measures a commanding 12-point lead for the Progressive Conservative Party of Ontario with 39 per cent support province-wide. Both its rivals, the Ontario Liberals and the Ontario NDP, are battling for second place with 27 per cent a piece.

With less than three months before election day, is a Doug Ford and PC win inevitable at this point? Hardly, but with such a level of support, a PC majority remains the most likely scenario. It would simply not be enough for either the Liberals or NDP to siphon voters away from each other to win—from a purely mathematical point of view, one of these parties has to gnaw away at PC support to tip the balance in its favour. Let us recall that Ford’s PCs won a 76-seat majority in 2018 with just over 40 per cent of the popular vote. So while PC support may stand just below its 2018 level, the opposition is far more divided than in 2018, when Liberal support had crumbled and the NDP became the official opposition. With these two parties currently at near-identical levels of support in the province, neither currently have a realistic chance of making substantial seat gains from the PC.

In Metro Toronto, Léger measures a three-way race with only five points separating the Liberals (34 per cent), the PCs (31 per cent) and the NDP (29 per cent). In the 905/GTA, the PC party is well ahead of its rivals with 43 per cent of support, 15 points ahead of the Liberals and 19 points in front of the NDP. In southwestern Ontario, the PCs still hold a double-digit lead over the NDP. Naturally, the regional subsamples carry more uncertainty due to their smaller sample sizes, but these numbers have remained generally steady compared to Léger’s recent Ontario polls. Simply stated: If the non-PC vote doesn’t coalesce behind either the NDP or Liberals, especially in the GTA and other regions of Ontario, the PCs could ride to an easy majority come June.

The poll also shows a steep generational divide: among voters aged 18-34 years old, it is the NDP that leads the pack with 38 per cent, nine points ahead of the Liberals (29 per cent). Doug Ford’s PC party ranks third with 25 cent. However, with voters aged 35 and over, Léger measures a PC rout: an 18-point lead among voters aged 35-54 and a 17-point lead with voters over 55 years old. Needless to remind readers that, as a general rule, old voters are higher-propensity voters, and as such this gives the PC a massive advantage over its rivals.

We add this newest poll to the 338Canada electoral model. Here are the updated seat projections:

The Ontario PC party climbs back into majority territory with an average of 70 seats, seven seats above the 63-seat threshold for a majority at Queen’s Park (see full projection map here). The projection confidence intervals remain wide however: In the lower bracket, the PCs would be reduced to a plurality of seats, and we would then witness whether Ford could win over the confidence of the legislature and lead a minority government (which we presume would be on a short leash); in the upper bracket, a near-perfect vote split between the Liberals and NDP would propel the PCs to an even greater majority than in 2018.

For the Ontario Liberals, while the numbers suggest they would be best positioned to unseat the PCs, their advantage over the NDP for the role of top challenger is tenuous at best. See the seat probability density graph below: The Liberal Party has a modestly higher ceiling than the NDP, but a poor campaign from Steven Del Duca and a better than-expected GOTV from the NDP, and the Liberal Party could easily find itself in third place again. In short, the NDP has more “safe seats” than the Liberals:

Nevertheless, it would be unwise to suggest we know how this election will turn out. Unlike in 2018, Doug Ford will have a record to defend and, according to Léger, 57 per cent of the poll’s respondents admit that they could change their minds on who they will vote for in June—including 51 per cent of PC supporters. Doug Ford should be considered a solid favourite to win, but this data indicates that even his own voters aren’t locked in yet.

Details of this Ontario projection are available on the 338Canada Ontario page. To find your home district, use this list of all 124 provincial districts, or use the regional links below: