The splintering of the right in Alberta: 338Canada 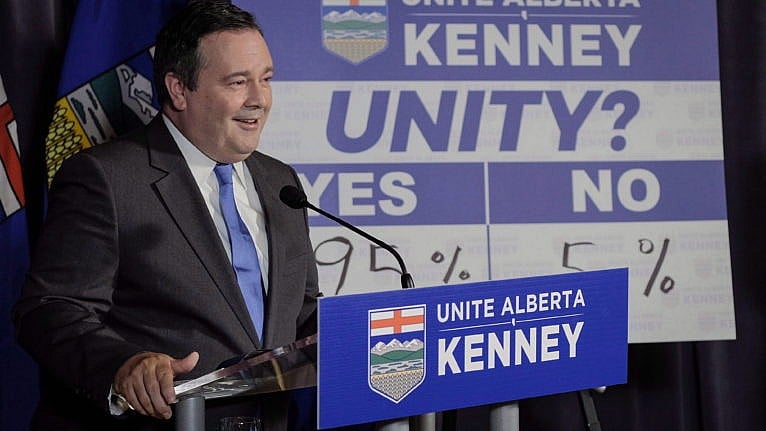 Kenney announces the results of the referendum on unity in Calgary on July 22, 2017 (Jeff McIntosh/CP)

When Mainstreet Research released its latest Alberta poll in May showing the Wildrose Independence Party in third place with 17 per cent of voting intentions province-wide, some eyebrows were understandably raised. Could it be that Jason Kenney’s right flank was splintering off his United Conservative Party, a narrative ominously similar to the one that doomed the Progressive Conservative Party of Alberta only six years ago? Or could it simply have been a statistical outlier? Back in March, Viewpoint Alberta and Janet Brown Opinion Research had measured Wildrose support at four and six per cent, respectively. The Wildrose had not even figured in Léger‘s survey of the province.

Lo and behold, the new round of provincial polling from the Angus Reid Institute (ARI) confirmed Mainstreet’s recent upward trend for the Wildrose. According to ARI’s Alberta numbers, Rachel Notley’s NDP leads with 41 per cent of voting intentions. Jason Kenney’s United Conservatives take second place with 30 per cent, and the Wildrose jumps to 20 per cent in the province.

Such numbers should give serious 2015 flashbacks to conservative voters in Alberta. After a difficult campaign by Jim Prentice’s PC, the NDP won the popular vote with 41 per cent, the PC took 28 per cent and Brian Jean’s Wildrose finished a close third with 24 per cent (although the Wildrose did win 21 seats to the PC’s 9 that evening). Without taking away any merit from the NDP, the division of right-of-centre votes had clearly paved the way for the NDP’s 2015 victory in Alberta.

According to numerous polls from different firms, Jason Kenney’s handling of the pandemic has undeniably hurt his party’s fortune in the past six months. Since December 2020, Léger’s biweekly tracker consistently has Kenney as one of the least appreciated premiers in the country (by their own voters). ARI has measured a similar trend: Jason Kenney’s approval rating went from 61 per cent back in June 2019 to a dismal 31 per cent in June 2021 (in last place among Canadian premiers).

As for voting intentions, it is worth noting that the UCP has been struggling in the polls before this recent spike of Wildrose support. Here below are all the Alberta polls publicly released in 2021. Notice the NDP is leading in all of them by varying margins:

In the Mainstreet poll back in May, numbers showed the Wildrose performing at its highest outside Alberta’s two metropolitan areas, where the UCP basically mopped the floor with the NDP in 2019, winning every electoral districts except for Lethbridge-West. While Angus Reid’s poll did not include a regional breakdown (and had a smaller sample size), we could safely assume this trend has not been reversed (the Wildrose also saw its highest scores in the rural regions of Alberta back in 2015). Therefore, should the Wildrose poll between 17 and 20 per cent province-wide, it would be a safe assumption to put the party at a competitive level with the UCP outside of Calgary and Edmonton.

We use these fresh numbers to update the 338Canada Alberta projection. Naturally, since Alberta public opinion appears to be in flux in recent months, these numbers contain a fair share of uncertainty. Nevertheless, although “hyperlocal” polling would be helpful in precisely identifying Wildrose hotspots, these numbers below—using past trends and election results—should paint a reasonable picture of the current political landscape in the province.

Here below is the updated seat projection:

[On the graph above, the numbers indicate the projection’s seat averages and the coloured bars, their 95 per cent confidence intervals.]

The NDP finds itself leading the fray with an average of 48.6 seats, just above the 44-seat threshold for a majority. The UCP is down to just under 38 seats. (We normally round the seat averages to the closest unit, but doing so this time would have added to 88 instead of 87 seats.)

The big question mark surrounds what would happen with the Wildrose using recent levels of support measured by Mainstreet and Angus Reid. This projection has the Wildrose at an average of 0.6 seats, meaning that it has, on average, a 60 per cent chance of winning one seat. Which riding would that be? We do not have enough data to pinpoint a specific riding, but here we give a list of ridings where the Wildrose has the greatest odds to win (even though the UCP remains the favourite in many of those ridings).

While it is far too early to conclude that the “Unite the Right” movement in Alberta is crumbling, the past months have revealed major cracks in its foundation. Fortunately for Jason Kenney, the UCP still has just under two years to recover until the 2023 election. However, although the “Orange Chinook” that blew across Alberta in 2015 may have pushed the province towards a two-party system, the current discontent on Kenney’s right flank and the hypothetical growth of a new Wildrose Party indicate that the UCP’s recipe for victory in 2019 may not work again in 2023.

The fact that the new Wildrose claims to be pro-independence adds more uncertainty to these numbers. Nevertheless, one should not directly correlate the growth of WIP with higher support for Alberta independence. In Quebec for instance, the resolutely left-wing party Québec solidaire (QS) has also claimed to be officially pro-independence, a policy which has unquestionably helped the party erode PQ support over the years. However, poll after poll has shown that many (and sometimes most) QS voters do not actually support Quebec independence, and tend to vote for the party because of its social policies more than for its official stance on Quebec sovereignty. The same could potentially be true of the new Wildrose Party.

Indeed, Wildrose could very well capture support from dissatisfied UCP voters who are not necessarily pro-independence. Add these potential votes with those who really do support an independent Alberta, and you may have a party strong enough to play spoiler in the next Alberta election.

For more details on this Alberta projection, visit the 338Canada Alberta page. Find your home district on this page, or use the regional links below: