Philippe J. Fournier: In our latest projection, the CAQ party has more safe seats than the threshold for a majority. Meanwhile, the PQ continues to disintegrate. 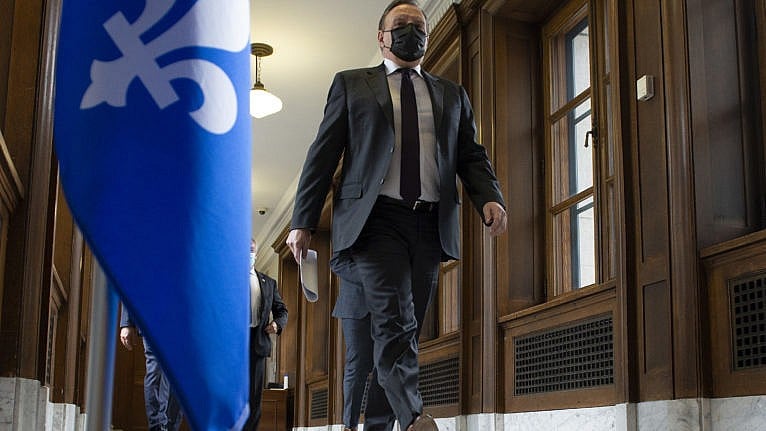 Legault walks to a news conference before Question Period on May 6, 2021 at the legislature in Quebec City (CP/Jacques Boissinot)

François Legault’s dominance of the Quebec political landscape has not faded one iota since last winter, according to a new Léger poll published in Le Journal de Montreal last Friday. With just above two-thirds of Quebec voters expressing satisfaction with the CAQ’s handling of the pandemic thus far, Legault remains in strong position for re-election next year. In fact, if a provincial election had been held last week in Quebec, the CAQ would have won a majority of historic proportions, with close to half the Quebec electorate siding with Legault’s party.

Here are the poll’s voting intentions among decided voters:

The CAQ stands alone in first place with 46 per cent of support, a crushing 26-point lead over the second-place Quebec Liberals. Not only does the CAQ lead its rivals in every region of Quebec outside the Island of Montreal, but it also holds a 37-point lead among francophone voters. Although the CAQ is second to Quebec solidaire (QS) among the younger electorate (18 to 34 years old) by a 7-point margin, it dominates the 35 and over demographic by 30 points, including a 38-point lead among voters aged 55 and over.

The last calendar year has not been kind to the Quebec Liberal Party (QLP) and new leader Dominique Anglade. The Liberals currently sit at 20 per cent overall, but this figure requires some additional context: The QLP has lost a tremendous amount of support in francophone Quebec since its Jean Charest and Philippe Couillard days, and now mostly relies on support from anglophone and allophone communities in and around Montreal. According to Léger, the QLP only receives support from 10 per cent of francophone voters—in fourth place behind the CAQ, Quebec solidaire and the Parti Québécois. With such support, the QLP would not even win a handful of seats outside of the Island of Montreal.

As for left-wing Quebec solidaire (QS), Léger measures its support at 14 per cent, two points below its 2018 result. This is the second consecutive poll that puts QS ahead of the PQ (albeit by a margin smaller than the poll’s uncertainty). However, sources indicate that recent unreleased internal numbers had also shown similar trends. While QS has not grown its province-wide support since 2018, it still fares better then either the QLP or PQ compared to the last provincial election.

Which takes us to the Parti Québécois. Léger measured the PQ at only 12 per cent in the province, and also at 12 per cent among voters aged 55 years old and over—a demographic the PQ used to dominate. The PQ is also in fourth place both among young voters and in the greater Montreal metropolitan region. These are stark numbers for a party that held power at the National Assembly a mere eight years ago. The new PQ leader, Paul Saint-Pierre-Plamondon, is viewed as the favourite candidate for premier by only 4 per cent of the poll’s respondents—equivalent to only a third of PQ support.

Finally, a word on the fifth party indicated on the graph above (in purple): The Quebec Conservative Party is now polling at 6 per cent, a figure significantly higher than in recent months and years. A fringe party since its rebirth in 2009 (which earned less than 1.5 per cent of the vote in 2018), the QCP is now led by right-wing radio host Eric Duhaime. For readers outside Quebec who may not know Duhaime: He is a former correspondent for Rebel Media, has made a career of being a polemicist on air (one of the many ideas he expressed on air: Poor people who do not pay income taxes shouldn’t have the right to vote, and one’s vote should increase in weight proportionately to one’s income), and has fully embraced Trump-style populism and anti-mask rallies across the province (in line with PPC leader Maxime Bernier at the federal level). Still, the QCP is not projected to win any seat at this point, but Léger measured its support at 14 per cent in the Quebec City metropolitan area—above both the Quebec Liberals and the PQ in the region.

We add this poll to the 338Canada Quebec electoral model and present today this updated Quebec projection. Here are the seat projection averages according to the latest numbers:

The CAQ is projected to win an average of 95 of the National Assembly’s 125 seats. Its dominance in francophone Quebec is such that it would most likely sweep the entire Quebec City region, virtually all suburbs of Montreal (including five of six districts on the Island of Laval), and take all of the Eastern Townships, Mauricie, Abitibi and Saguenay regions.

The CAQ’s seat probability density ranges from 84 to 106 seats in the 95 per cent confidence interval:

In fact, this projection suggests the CAQ has more “safe” seats (72) than the threshold for a majority at the National Assembly (63).

Although no opposition party fares well in this projection by any empirical measure, the CAQ’s dominance hurts the PQ the most. Currently holding nine seats in the National Assembly, the PQ is projected to win an average of two seats in the province, but is projected leading in a single riding (Matane-Matapédia, MNA Pascal Bérubé).

Here below is the PQ’s seat probability density. As mentioned above, although the projection average for the PQ is two seats, the most likely outcome (with a probability of 51 per cent) as of this writing is a single seat:

As for the Liberals, the arrival of new leader Dominique Anglade has not moved the needle for the party and the QLP looks to be headed for an even worse defeat next year than in 2018. With historically poor numbers among francophone voters (roughly 80 per cent of the Quebec electorate), its 31-seat result from 2018 currently sits outside this projection’s 95 per cent confidence interval:

Finally: Quebec solidaire would not be likely to repeat its performance from 2018 (10 seats) according to these numbers. As it currently stands, QS would be favoured to keep most of its Montreal seats, but ridings such as Rouyn-Noranda–Témiscamingue and Jean-Lesage could be out of QS’s reach due to the CAQ’s dominance. Two other QS seats from 2018, namely Taschereau and Sherbrooke, could also be in play:

In these turbulent times, we have observed that public opinion of a party or party leader can sometimes turn on a dime. Before the pandemic reached our borders, who could have foreseen the massive unfavourable numbers that polls have recently measured towards Alberta Premier Jason Kenney? Or who could have predicted the sharp rise of Doug Ford’s numbers in the spring in 2020, and his even sharper fall from grace in 2021? François Legault has weathered the worst of the pandemic storm with stratospheric approval numbers so far, and, one year in, still crushes the opposition in public approval.

Considering the low popularity and weak notoriety of opposition leaders at the National Assembly and the fact that Quebec stands among the vaccination leaders in Canada (as of this writing), it is difficult to imagine the CAQ blowing its re-election chances next year—especially if a fifth party gains any ground at the expense of the “old” parties. But we shall see: Quebec voters have shown little party loyalty over the past decade.

For more details on this Quebec projection, visit the 338Canada Quebec page. Find your provincial districts in this list or use the regional links below: