338Canada: The Trudeau-Singh agreement could weigh on the Ontario campaign

Philippe J. Fournier: Our latest projection still has Ford solidly in the lead, but anything short of a majority will undoubtedly invite talk of cooperation between the Liberals and NDP 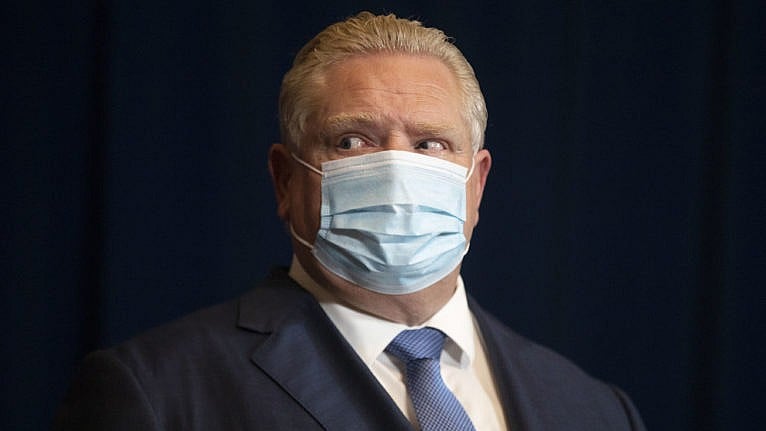 The June 2 Ontario general election is fast approaching (only 67 days, but who’s counting). Opinion polls over the past months have shown little movement in voting intentions, meaning Doug Ford’s Progressive Conservative Party remains, at this point in time, the favourite to win the most seats. And while the Ontario Liberal Party and Ontario NDP are still locked in a fierce battle for second place, we know that First-Past-the-Post electoral dynamics can be quite cruel to parties with mid-20s support against a single party in the mid-30s.

Using this latest data, we update the 338Canada Ontario seat projection and calculate the following averages and ranges:

The PC party is currently favoured in 68 electoral districts (63 seats are required for a majority), thus making a PC majority the most likely scenario at this point in time (61 per cent of simulations result in a Ford majority). However, the tightening of the numbers compared to 2018 and the fluctuation of the past cycles still make this projection highly uncertain. We count no fewer than 28 “toss up” races and another 16 tagged as “leaning” towards a party. Hence, a modest bump by any party could still flip this projection significantly.

The Liberals are currently projected at 30 seats in the province, but have also the widest possible range of outcomes: Should the Liberals lose ground to the NDP (even a modest 2-3 point slip), they would could find themselves in a distant third place—once again—in terms of seats. In the opposite scenario where the Liberals become the de facto anti-Ford option, we estimate the party could win as many as 40-45 seats, and thus making a PC majority that much less likely. As for the NDP, the available data suggests the 33.6 per cent vote share in 2018 may have been a ceiling for the party. Since the New Year, the NDP has polled between 22 and 31 per cent, with what appears to be an outlier at 36 per cent in early January.

Nevertheless, we should stress that the PC still holds a massive advantage over its main rivals in the seat projection, not only in the average numbers, but in what we consider each party’s floor. See the following breakdown of the projection:

Counting the “safe” and “likely” seats for each party, the PC party holds the lead with 47 seats (28 safe + 19 likely). Should it indeed win those seats, the PC party would then only need 16 additional seats for a majority. In contrast, the Liberal party is projected as holding 13 safe/likely seats and the NDP, 19 seats.

As is often the case in Ontario elections, the Greater Toronto Area will be crucial in determining the outcome. In 2018, Ford’s PC party dominated the region and, along with its many safe rural seats, secured a 76-seat majority. Below are the projections for the six Mississauga seats, which the PCs swept in 2018. Among those districts alone, we currently project five toss ups and one leaning in favour of the Liberals. Naturally, should the PCs outperform those numbers (or should the Liberals underperform), a PC majority would be almost assured:

However, should Ford’s support slip in the seat-rich GTA, the PCs could lose many of those close races to the Liberals. The most likely scenario would suddenly flip from a PC majority to a minority.

We will also keep a close eye on the Scarborough seats, of which the PCs have won four of six in 2018. We currently project three toss ups and a Liberal leaning riding in this region:

Once again, these close races could determine whether Ford gets another four years at the helm, or if, by holding only a plurality of seats at Queen’s Park, the PCs would depend on opposition support to remain in power. Much drama would assuredly ensue, since both Andrea Horwath and Steven Del Duca have already expressed high reluctance (if not outright refusal) to prop up Doug Ford in any scenario. It is therefore not unreasonable to state that it will be “majority or bust” for Ford’s PC party.

This past week featured a historic agreement at the federal level: a “confidence-and-supply agreement” that would keep Justin Trudeau’s Liberals in power with NDP support until June 2025, “contingent on the implementation of a negotiated list of policies and priorities.” That this agreement occurred only weeks before the Ontario campaign gets under way is probably coincidence, but the timing couldn’t have been more ideal for Ontario voters, regardless of party allegiance.

Why? For Liberals and New Democrats, this new agreement at the federal level brings forth a modern example of cooperation between two parties capable of compromising on many issues and bringing stability to government. Horwath and Del Duca will undoubtedly have to face questions about potential cooperation should the PC party be reduced to a minority.

Neither should be able to dodge those scenarios by labeling them as too hypothetical. While the context between parties differs from the federal level, the blueprints for an agreement are right there in the open. Many Anti-Ford voters will expect, even demand, cooperation.

As for the PCs, it gives Ford a unique opportunity to warn right-of-centre voters against such coalitions with a concrete, recent example. Elect Ford, or Del Duca and Horwath will try to pull a Trudeau-Singh. The attack ads are probably in the works already.

Details of this projection are available on the 338Canada Ontario page. To find your home district, use this list of all 124 provincial districts, or use the regional links below: