Philippe J. Fournier: With a weak opposition and a diehard base of supporters, Ontario's Conservatives still look unbeatable in the latest 338Canada election projection 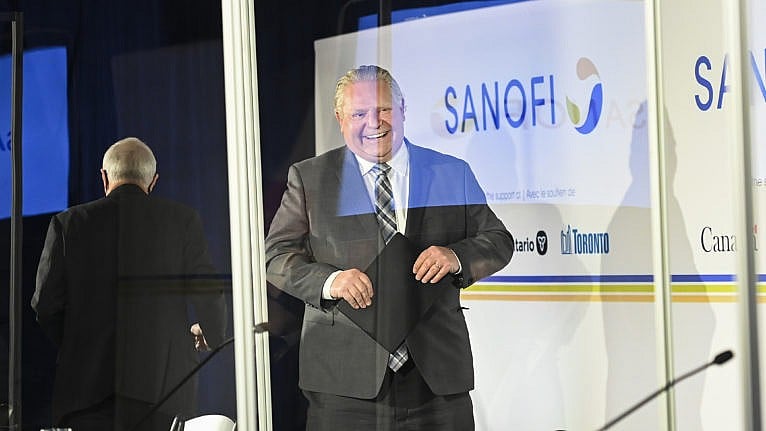 A new Ontario poll from Léger / The Canadian Press was released last week and showed Doug Ford’s Progressive Conservatives still solidly in command over their rivals in voting intentions in the province. While the PCs lead by a reduced margin compared to what other polling firms had measured this winter, the party still benefits from a deeply divided opposition, with the OLP and NDP consistently polling at similar levels for the past months.

Let us take a look at the latest numbers. Among the poll’s decided respondents, 38 per cent support the PCs, a 10-point advantage over the second-place Ontario NDP. The Ontario Liberals stand in third place with 23 per cent. Green Party support remains stable at 8 per cent.

This was the first Léger poll in Ontario since the 2018 provincial campaign, so our only basis for comparison are numbers from other firms (see all Ontario polls here). Since January, Abacus Data has measured the PCs with a slim 5-point lead over the Liberals, while Campaign Research and Mainstreet Research both had the PCs comfortably ahead with 43 per cent of voting intentions, both polls showing the PCs 18 points ahead of the party’s closest rival (Campaign had the NDP in second place, while Mainstreet measured the Liberals ahead of the NDP).

Despite these minor differences, all these Ontario polls agree that the PC Party remains comfortably in majority territory with a little over a year to go before the start of the 2022 campaign.

The poll also contains interesting information in its demographic subsamples, especially the gender and generational split.

Among male voters, the PCs crushes their rivals with 45 per cent support, a comfortable 22-point lead over the NDP. The Liberals are statistically tied for second place with 22 per cent. However, these voting intentions numbers come in stark contrast with those of female voters:

Among Ontario women, the NDP leads the field with 33 per cent, statistically tied with the PCs at 31 per cent. The Ontario Liberals take third place with 24 per cent. For the sake of a mere thought experiment, if voting intentions aligned with male voters, the PCs would win a crushing majority with a seat total ranging from 90 to 100 seats (out of 124 seats). If numbers aligned with the women-only vote, the PCs would still be favoured to win the most seats, but with only a small plurality of seats, and with a much stronger NDP-Liberal opposition.

We have seen significant gender splits in other Léger polls in Canada of late, with right-of-centre parties generally taking first place among men, but trailing among women. However, it is interesting that this gap in Ontario (a swing of 24 points between male and female voters) is of much greater amplitude than at the federal level, or even in recent polls from Quebec, British Columbia and Alberta.

The generational breakdown also shows significant division in party support. Among voters aged 18-34 years old, the NDP leads its rivals with 41 per cent, 13 points ahead of the PCs:

Yet, among voters aged 35 and over, the PCs take a 17-point lead with 42 per cent. The Liberals (25 per cent) and NDP (23 per cent) are a distant second and third, respectively. The contrast is even starker for voters 55 years old and older: the PCs get the support of 47 per cent of respondents, the Liberals take second place with 26 per cent, and the NDP falls into third place with only 20 per cent.

Adding these numbers to the 338Canada Ontario model, we project Doug Ford and the Ontario PCs would win an average of 76 seats, mirroring the party’s 2018 results. The projection confidence intervals for the PC stretch to the low 60s (a strong minority) to the low 90s in terms of seats. The threshold for a majority at Queen’s Park is 63 seats.

The Ontario NDP would be favoured to remain the Official Opposition with an average of 32 seats. The Ontario Liberals, winner of only seven seats in the 2018 election, are currently projected at 15 seats on average.

One year out from the 2022 Ontario campaign, Doug Ford remains in an historically strong position for re-election. Not only has the PC Party led every opinion poll since the pandemic reached our borders last spring, further data from this latest Léger poll shows the PCs can currently count on the most rock-solid base of voters: 65 per cent of PC voters say their vote is final, the highest proportion among the four parties represented at the Ontario Legislature by more than 20 points.

Additionally, when asked what party would be their second choice, 42 per cent of PC voters say they do not have one, compared to 14 per cent of  Liberal and 9 per cent of NDP voters who say the same. According to this data, PC voters aren’t going anywhere soon, whereas opposition party voters are far more volatile and uncertain.

During the 2019 federal campaign, it had been well documented that Andrew Scheer was hesitant to campaign along side Doug Ford in Ontario, for Ford’s approval rating then hovered between the low and high 30s in the province. Have the tables turned between Ford and the CPC? According to the latest numbers, it is Ford who would probably neither need nor request Erin O’Toole’s support during next year’s Ontario election, for the Ontario premier is performing at higher levels than his CPC counterpart, especially in the seat-rich region of the 905.