Philippe J. Fournier: The latest projection shows that if an election was held now, the UCP would be nearly swept out of urban Alberta and even lose some of its rural base 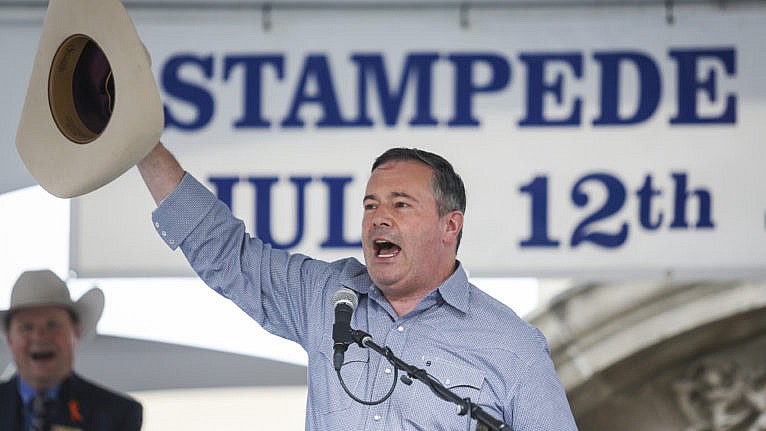 Alberta’s equalization referendum has come and gone, and although the top-line results appear to significantly favour the Yes side (full results should be known later this week), it is far from clear this victory will help Jason Kenney turn the tide on his embattled premiership, at least in the short term, according to the latest polling out of Alberta.

Two Alberta polls were published earlier this month by Mainstreet Research (for the Western Standard) and Innovative Research, and both indicated the NDP had grown its lead over the UCP in voting intentions. Indeed, both polls gave the NDP 45 per cent support among Alberta voters to only 29 per cent for Jason Kenney’s UCP. (Innovative was on the field in late September and Mainstreet, in October):

Moreover, a new poll from Common Ground / Viewpoint Alberta fielded in late September and early October shows a similar, worrying trend for the United Conservatives: Rachel Notley’s NDP climbs to 50 per cent support among decided Alberta voters, a crushing 23-point lead over the governing UCP, which falls to only 27 per cent. (Full details of this poll will be released early this week.) In its previous poll back in March 2021, Viewpoint Alberta had the NDP 10 points ahead of the UCP province-wide.

How could the UCP vote go from 54 per cent in the last general election to polling at or below the 30 per cent mark merely two and a half years later? Could there be so many UCP-to-NDP switchers in the province? While this hypothesis is not implausible, another possible explanation for this dramatic UCP drop would be an increasing number of disaffected UCP voters, who would be less ready and/or willing to share their views with pollsters. Equally worrying for the UCP: Disaffected voters generally also show up on voting day in much fewer numbers than motivated ones.

These stark numbers for the UCP do not come out of a vacuum: Poll after poll from several professional polling firms in the past 12 months have all measured an increasing dissatisfaction towards Jason Kenney’s handling of the pandemic, and the newer numbers made available in the past weeks have shown no sign of recovery: In its latest North American Tracker, Léger still has satisfaction towards the UCP’s handling of the pandemic at a measly 26 per cent, the lowest level of approval among provincial governments in Canada:

Approval ratings of Premiers from the Angus Reid Institute

Using this latest data, the 338Canada Alberta model calculates that, unsurprisingly, the Alberta NDP would be heavy favourites to win the most seats had a provincial election been held this week. The model currently shows the NDP at a stunning 60 seats in the province (on average), well above the 44-seat threshold for a majority at the Alberta Legislative Assembly:

According to these numbers, the UCP would be nearly swept out of urban Alberta and could potentially even lose a fraction of its rural base. Without any strong third-party support in Alberta (neither the Alberta Party nor the Wildrose Independence Party would be favoured to win a single seat), the NDP would most likely win a majority with strong numbers from both Calgary and Edmonton, and pockets of support out of rural Alberta.

The UCP’s fall from grace is such that the seat distributions—even considering the projection’s high uncertainty—do not even overlap in the 95 per cent confidence intervals:

As I mentioned in last week’s Ontario column, seat projections that far out of an election campaign have no predictive value, and merely offer a general depiction of the current political landscape. Unless the UCP government unexpectedly falls before the end of its current term (which would require either several floor crossings and/or UCP MLAs sitting as independents and voting against their former party in a confidence vote), Albertans will only go the polls in the spring of 2023, roughly 18 months from now. As the saying goes, that is a long time in politics.

However, we did mention this very same idiom last spring when Léger, Mainstreet, Angus Reid, Janet Brown Opinion Research, and Viewpoint Alberta all measured the NDP leading the UCP by significant margins. No one seriously disputes that several events and turns could happen before then, but still many months have gone by and the UCP has not yet been able to climb out of this hole.

The equalization referendum may have given Jason Kenney an opportunity to return to a recipe that has served the Alberta premier well in the past: Fighting against Justin Trudeau’s federal Liberals. However, with little appetite from coast to coast for a re-opening of constitutional negotiations (which eliminating equalization would require), it is increasingly unlikely that the referendum will give Kenney the leverage he expected to gain from it. One way or another, over the coming months, Kenney will have to pivot to governing through the pandemic to fend off not the Prime Minister, but the UCP’s provincial rivals, or risk sinking the UCP experiment he helped create four years ago.

Details of this projection are available on the 338Canada Alberta page. To find your home district, use this list of all 87 provincial districts, or use the regional links below: