6 things we've learned about Rachel Notley and the Alberta NDP 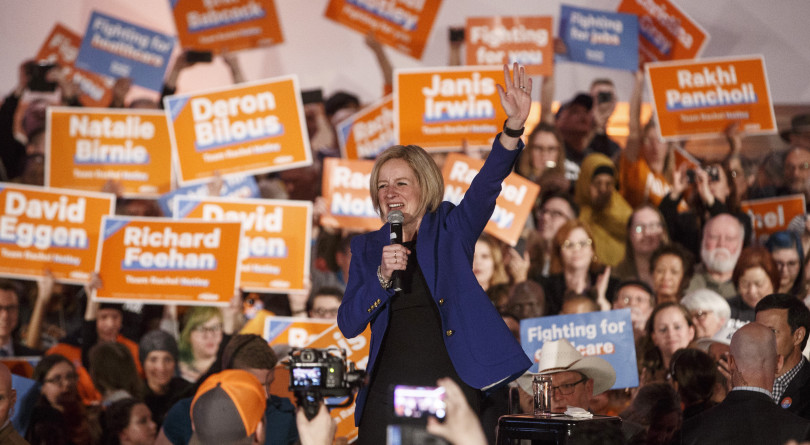 This is from Alberta Politics Insider, the daily Maclean’s newsletter for the provincial election campaign. Click here for what we’ve learned about Rachel Notley and the NDP.

1) She’s not such an amazing campaigner, after all. The 2015 election introduced Alberta and Canada to a sunny dispositioned, not-too-socialist-seeming New Democrat leader, who looked especially intriguing in the debate as the short, smiling lady in crème blazer against a row of dour men in navy suits. This time, Notley struggled with high expectations, turning in a carefully scripted and less-than-dazzling debate performance, and overdoing it on the attack-side rhetoric. While she professed to offer cleaner government than Jason Kenney, she didn’t excel at playing defence when faced with questions about her two unnamed MLAs accused of sexual misconduct while in office.

2) Fear is what fuels their supporters. Notley began the NDP campaign stating she didn’t think Kenney was a racist, but his party had a racism problem. The UCP campaign did turn out to have an abnormally high quotient of homophobia and xenophobia in its ranks, and this became a core message from an incumbent party struggling on their economic message. Notley proved she could be harsh and bare-knuckled at times: “You may not agree with everything I’ve done, but we share core values—and we won’t attack minorities,” she said at a campaign stop in a day care. If this strategy yields dividends for Notley, expect to see Justin Trudeau swipe it in this fall’s federal campaign.

3) We learned about Notley’s family. In 2015 and throughout her term as premier, Notley shielded her children from public view. This time, her 20-year-old son Ethan introduced her at a rally, and teenage daughter Sophie was in a Facebook video, joking about how much her mom cusses in front of friends. It was designed to give Albertans further reason to like this generally likeable politician, though it may also been designed as contrast to Kenney, who would be Alberta’s first child-free premier (though Danielle Smith came close to winning in 2012).

4) Back to corporate-bashing. Gone this campaign were the images of Notley at a boardroom table with captains of industry. She instead reverted to a classic NDP posture, talking about CEOs as the billionaire “corporate buddies” of conservatives who line their pockets at the working class’s expense. The UCP were joined by Liberals and the Alberta Party in promising to cut the provincial corporate tax, as a way to attract investment. Notley played the economic populist in response, saying that Donald Trump’s corporate rate cuts didn’t stoke investment. While that’s true, this occurred because the U.S. economy was hot, something nobody says about Alberta’s.

5) NDP’s economic solution: more government. The centrepiece of Notley’s jobs plan is to double the number of incentive dollars for petrochemical and oil upgrading—economic diversification, like former premier Peter Lougheed did in the 1970s, the NDP argues. (This “diversification” remains focused on oil and gas, while Lougheed’s bets included acquiring an airline). A key basis of her pledge to balance the budget by 2023 is the assumption the Alberta government will make tanker-loads of money by leasing oil-hauling rail cars, another risky venture.

6) Her party needs her. Their own brand, not so much. It’s sometimes hard to remember Notley’s name isn’t part of the acronym NDP. Her party would be directionless without her, especially in the (probably unlikely) event Notley steps down as leader should the NDP lose. One Calgary candidate introduces herself while door-knocking as a local professional running to be the MLA; no mention of the NDP, lest that close off the conversation. When a couple of male residents asked the candidate what party she was with, her replies ended the doorstep visit. “We’ll cut this short then, thanks,” said one seemingly decided voter.